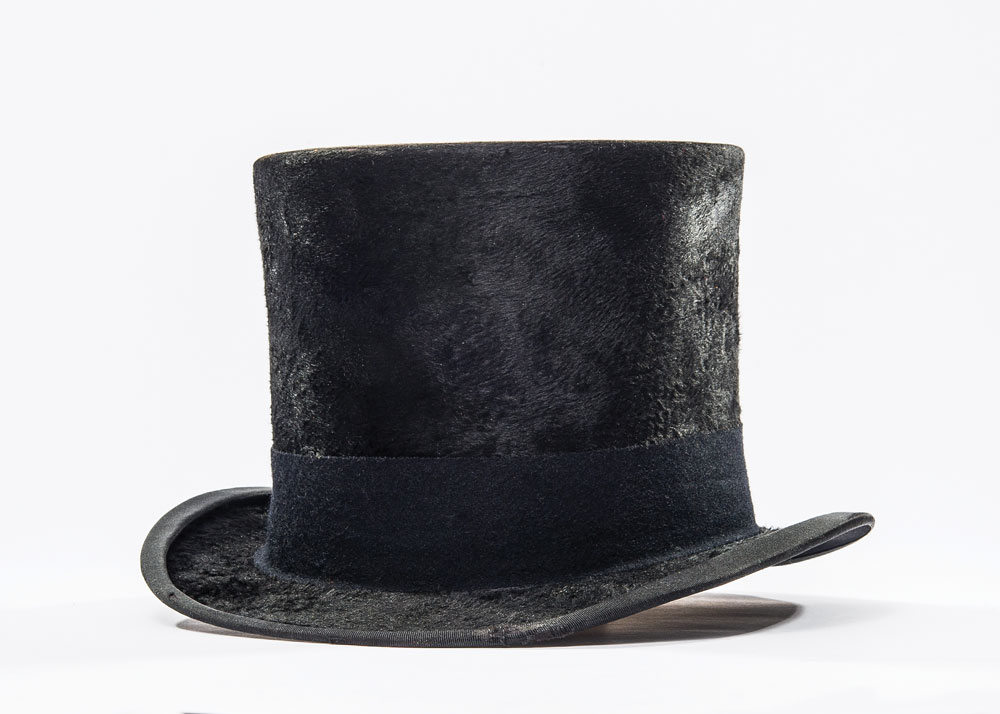 President Roosevelt’s personally-owned and -worn top hat, size 7 3/8, worn for his first presidential inauguration on March 4, 1933. The impressive format top hat is made of high quality beaver fur with a white silk lining and leather inner band, with the president’s full name, “Franklin Delano Roosevelt,” embossed in gold lettering on the left side of the leather band and on the inner crown. Includes the original storage box, constructed of leather-wrapped wood with a dark green smooth satin lining, embossed on the front in gold lettering, “F. D. R.,” and stamped by the maker, “Cross.” Includes a detailed full-page letter of provenance on White House letterhead from Mildred Prettyman, a White House worker and the widow of Arthur S. Prettyman. Her husband had served as Franklin D. Roosevelt’s valet from 1939 until the president's death in 1945, and continued working for Harry S. Truman until he left office in 1953. Mrs. Prettyman describes the close relationship between her husband and FDR, in part: "President Roosevelt said of his Valets, 'You are my lifeline, the keeper of my keys.' The President did not mean real keys, but the keys to FDR's secrets." Discussing this specific piece, she writes: “It gives me pleasure to present to you a beautiful black Inaugural top hat, owned and used by President Franklin Delano Roosevelt. The Inaugural top hat with the original box came to my husband, Arthur S. Prettyman, along with other important F. D. R. personal items…In addition to the President’s Inauguration, he would wear his top hat to various occasions, such as formal dinners and receptions.”

Roosevelt wore top hats to his 1933, 1937, and 1941 inauguration ceremonies; the latter two hats are accounted for in institutional collections. This 1933 Inauguration top hat is in absolutely splendid condition. Franklin Pierce began the tradition by wearing a top hat for his presidential inauguration in 1853, with nearly every president thereafter following suit through Nixon, with Eisenhower and Johnson being notable exceptions. This FDR 1933 formal hat topped off the stylish ensemble worn by Roosevelt for his 1933 inauguration, which included striped trousers, fur-trimmed morning coat, cane, and pince-nez spectacles. FDR rode to the ceremony in an open-topped car alongside President Hoover, and is seen in numerous pictures with the hat—wearing it and animatedly waving it to the crowd gathered along the street—as they made their way to the East Portico of the Capitol, where he would receive the oath of office from Chief Justice Charles Evans Hughes. Once sworn in, President Roosevelt delivered a speech that remains one of the most well-known in American political history, opening with the strong and oft-quoted assertion 'that the only thing we have to fear is fear itself.' With the nation embroiled in economic depression and the world facing the specter of fascism's rise, Roosevelt's inauguration marked a crucial turning point around the globe—and this iconic hat, FDR's most prominent article of clothing on that day, is a monumental relic of this critical moment in history.