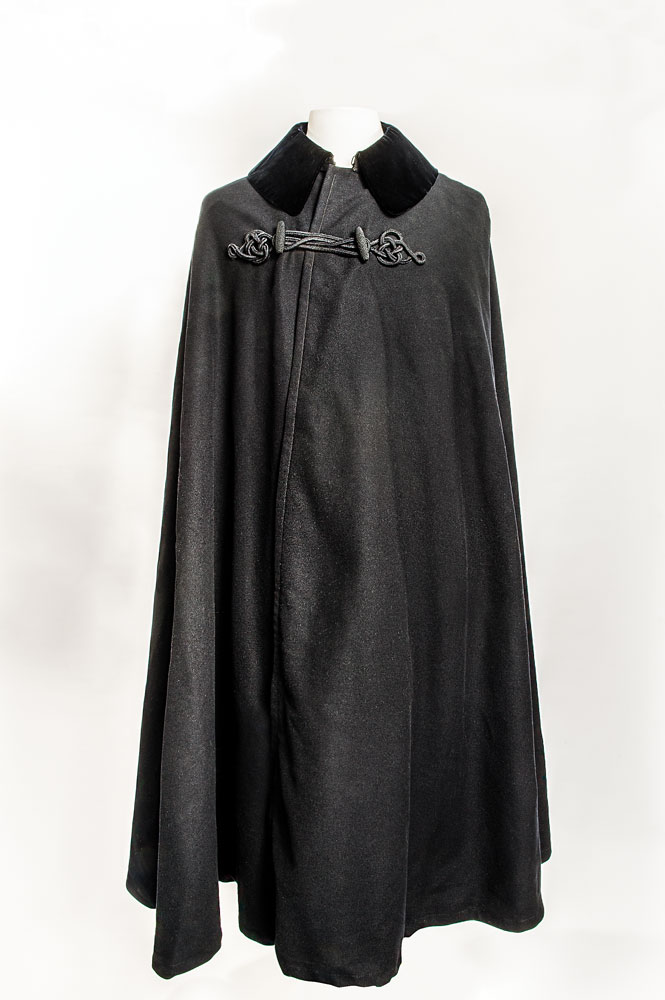 President Roosevelt’s remarkable personally-owned and -worn blue-black cape custom made of the highest quality manufacture and material by Lewis & Thos. Saltz of Washington, constructed of a fine heavyweight wool with a satin lining and velvet-trimmed collar. The manufacturer’s tag is sewn inside the neck area below a metal chain, and the cape features an ornate braided fastener at the neck. Includes a detailed letter of provenance on White House letterhead from Mildred Prettyman, a White House worker and the widow of Arthur S. Prettyman. Her husband had served as Franklin D. Roosevelt’s valet from 1939 until the president's death in 1945, and continued working for Harry S. Truman until he left office in 1953. Mrs. Prettyman describes the close relationship between her husband and FDR, in part: "President Roosevelt said of his Valets, 'You are my lifeline, the keeper of my keys.' The President did not mean real keys, but the keys to FDR's secrets." Discussing this specific piece, she writes: “It gives me pleasure to present to you one of the beautiful blue/black capes owned and used by President Franklin Delano Roosevelt. The navy blue/black cape came into the possession of my husband, Arthur S. Prettyman, shortley [sic] after the death of the President on April 12, 1945…This custom cape of superior quality was owned and used by President Roosevelt…At the back of the inside collar there is a custom chain for hanging purposes. This is because of the heavy weight of the wool. It is trimmed with a beautiful velvet collar. The cape [manufactured of the highest quality method and material] is held together in front by elegant epaulette-style braid with elegant crisscrosses.” Also accompanied by a number of photos showing President Franklin D. Roosevelt dressed in his characteristic attire, available for reference online at rrauction.com.

Lewis & Thos. Saltz was one of Washington's premier clothiers, known for outfitting the nation's elite—presidents, senators, and Supreme Court justices were all known to frequent the prominent haberdashery, and is thus an appropriate choice of maker for this FDR cape. The garment is undoubtedly the most iconic item in FDR's wardrobe—nearly all popular images of him from throughout his presidency show him in such a cape. More than a fashion statement, it was a practical piece of clothing—the design was less restrictive than a regular dress overcoat, allowing the president the extra upper arm mobility that he relied on to support himself due to the paralysis of his legs.

In the pictures of Franklin D. Roosevelt at the Yalta conference, he can be seen wearing his cape as he met with Winston Churchill and Joseph Stalin to determine the course of Europe's postwar future, and his flowing cloak is immortalized in the statue at the FDR Memorial in Washington—in both of these depictions, FDR's cape bears the distinctively designed woven clasp that fastens it in front. He is also shown in a similar cape in Douglas Granville Chandor's 1945 portrait displayed in the Smithsonian's National Portrait Gallery, and in Elizabeth Shoumatoff's portraits of him, including the famous 'Unfinished Portrait,' which he was sitting for at the time of his stroke and subsequent death. With the exception of Lincoln's top hat, FDR's cape is perhaps the most recognizable article of any piece of presidential clothing.

A defining element of his image, the cape projected an aura of power and strength to the public at large—a subliminal invocation of the emergent superhero and nod to the kings of old—allowing Roosevelt, afflicted with polio-induced paralysis from the waist down and confined to a wheelchair, to command the respect of the nation and world as it faced its greatest challenges of the century. This magnificent example of one of his capes, obtained directly from the wife of his longtime valet, is the quintessential FDR collectible—a piece of the greatest historical importance that defined the man and the era.