“As per your letter to President Nixon, we were pleased to carry your enclosed flag to the moon on Apollo 16” 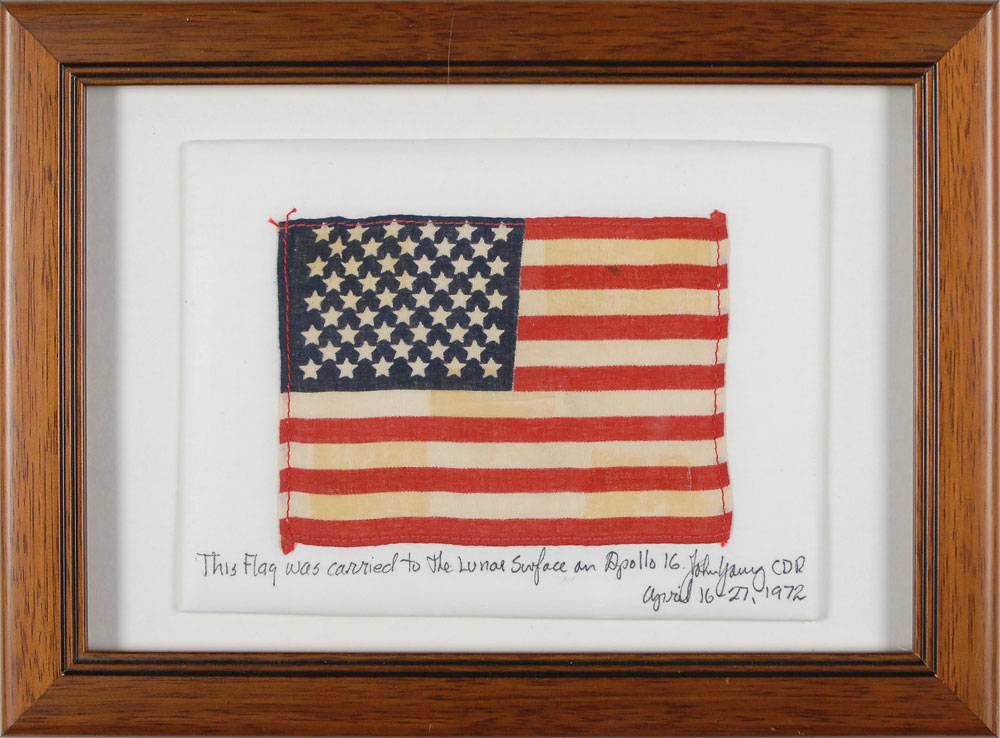 “As per your letter to President Nixon, we were pleased to carry your enclosed flag to the moon on Apollo 16”

Remarkable flown printed fabric American flag, 5.5 x 4, flown aboard Apollo 16 at the request of a Vietnam veteran. Flag is sewn to a white cloth mount, signed in black felt tip, “This flag was carried to the lunar surface on Apollo 16, April 16–27, 1972. John Young, CDR.” Includes a TLS from Deke Slayton to Captain Thomas C. Seitzinger, Jr., signed “D. K. Slayton,” one page, 8.5 x 11, NASA letterhead, February 26, 1972. In part: “Your recent letter to President Nixon has been referred to me for action. As you know the items that the crews carry in their personal preference kits are strictly personal choice. We receive thousands of requests…and, since the crew has a very tight weight limitation, we normally carry nothing that does not belong to the crews’ personal friends or family. However, I passed on your flag to John Young with the understanding he had no obligation to me or anyone else to carry it, and he will try to fit it into his kit on Apollo 16 in April…We appreciate all the good things you have done for your country, as I know the President does, and hope to get your flag back to you safely.” Also includes a TLS by Young from after the mission, signed “John Young,” one page, 8.5 x 11, NASA letterhead, June 27, 1972. In part: “As per your letter to President Nixon, we were pleased to carry your enclosed flag to the moon on Apollo 16. As you know, Apollo 16 was a very significant lunar highlands mission of discovery. But I never forget that the great people and their ideals that our flag represents makes our space program possible.” Flag is matted and framed to an overall size of 12 x 9. Light blocks of toning to flag and significant blocks of toning to letters due to adhesive, otherwise overall fine condition. Accompanied by a certificate of authenticity from Novaspace for Young’s autograph on the flag display, and a copy of a newspaper article about Seitzinger receiving the flag.

The news article relates that Seitzinger carried the small American flag throughout his tour in Vietnam, during which he lost a leg after being ambushed by 30 North Vietnamese fighters. Both Young and Slayton were military men themselves—Young completed a tour with the Navy during the Korean War and was then sent to flight school, and Slayton was an Air Force pilot who flew 63 combat missions over Europe and Japan during World War II—so they certainly appreciated Seitzinger’s service to his country. Flown American flags from Apollo missions are among the most desirable space collectibles, and these extremely scarce relics rarely have such an interesting story and patriotic association behind them—a truly unique Apollo 16 artifact. Pre-certified Steve Zarelli and RR Auction COA.