President Jefferson regrets that his duties “render it impossible for him to suffer himself to be drawn off by philosophical subjects, altho’ infinitely more pleasing to his mind” 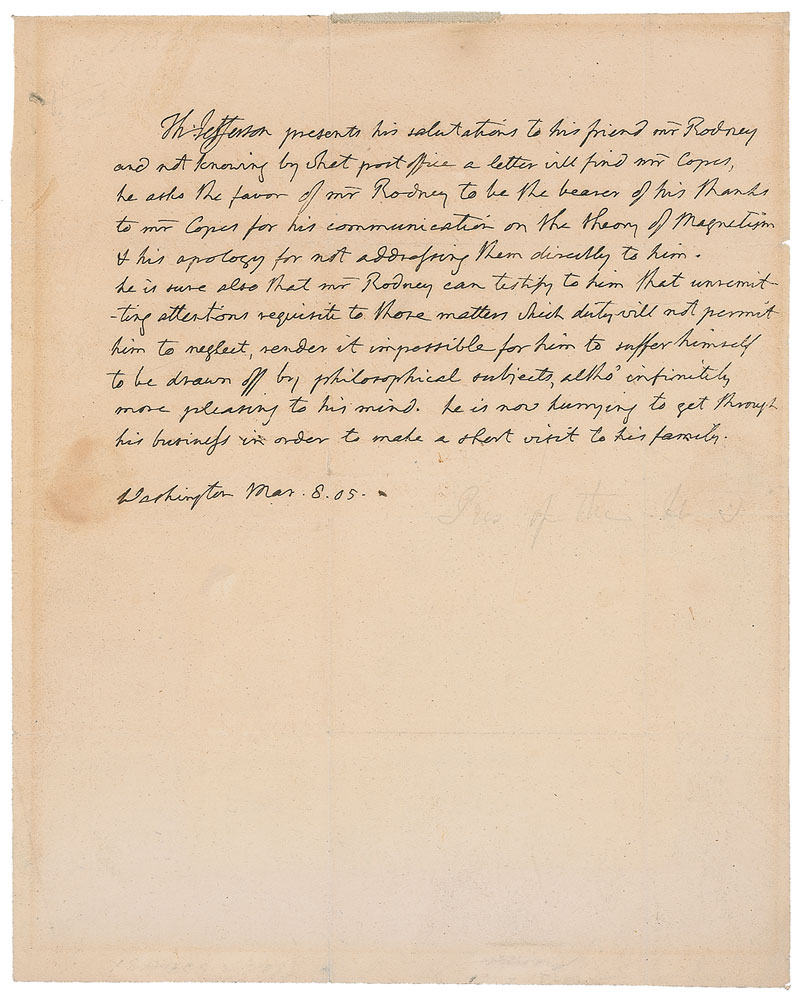 President Jefferson regrets that his duties “render it impossible for him to suffer himself to be drawn off by philosophical subjects, altho’ infinitely more pleasing to his mind”

Third-person ALS as president signed “Th: Jefferson,” one page, 8 x 10, March 8, 1805. Letter to Ceasar Augustus Rodney (1772-1824), nephew of Signer of the Declaration of Independence Caesar Rodney. In full: “Th: Jefferson presents his salutations to his friend mr Rodney and not knowing by what post office a letter will find mr. Copes, he asks the favor of mr Rodney to be the bearer of his thanks to mr Copes for his communication on the theory of Magnetism & his apology for not addressing them directly to him. he is sure also that mr Rodney can testify to him that unremitting attentions requisite to those matters which duty will not permit him to neglect, render it impossible for him to suffer himself to be drawn off by philosophical subjects, altho’ infinitely more pleasing to his mind. he is now hurrying to get through his business in order to make a short visit to his family.” Intersecting folds, mild toning to edges, light pencil remnants under text, small tape remnant along top edge, and a few light creases and spots, otherwise fine condition. Library of Congress photocopies of Congressman Caesar A. Rodney’s March 1, 1805, letter to Jefferson and Joseph Copes’s February 15, 1805, clearly penned Theory of Magnetism sent by Rodney to Jefferson are included.

In February of 1805, Joseph Copes addressed a manuscript to Jefferson, ‘the friend of science, and patron of Liberty, his obedient fellow citizen presumes to present this Theory of Magnetism.’ Delaware’s only congressman, Caesar A. Rodney, who later became Jefferson’s attorney general, forwarded his constituent’s manuscript to Jefferson. Copes’s theory on ‘the polarity, deviation, and variation of the Magnetic needle’ was of interest to the president, as he had studied related issues in the past. Jefferson had an avid interest in science and studied topics in mathematics, astronomy, medicine, meteorology, and other fields. As this letter indicates, he missed dwelling on “philosophical subjects” while occupied with his official duties as president. Pre-certified John Reznikoff/PSA/DNA and RR Auction COA.