Rare and early 1963 PYX magazine, signed before their performance behind a protective cage 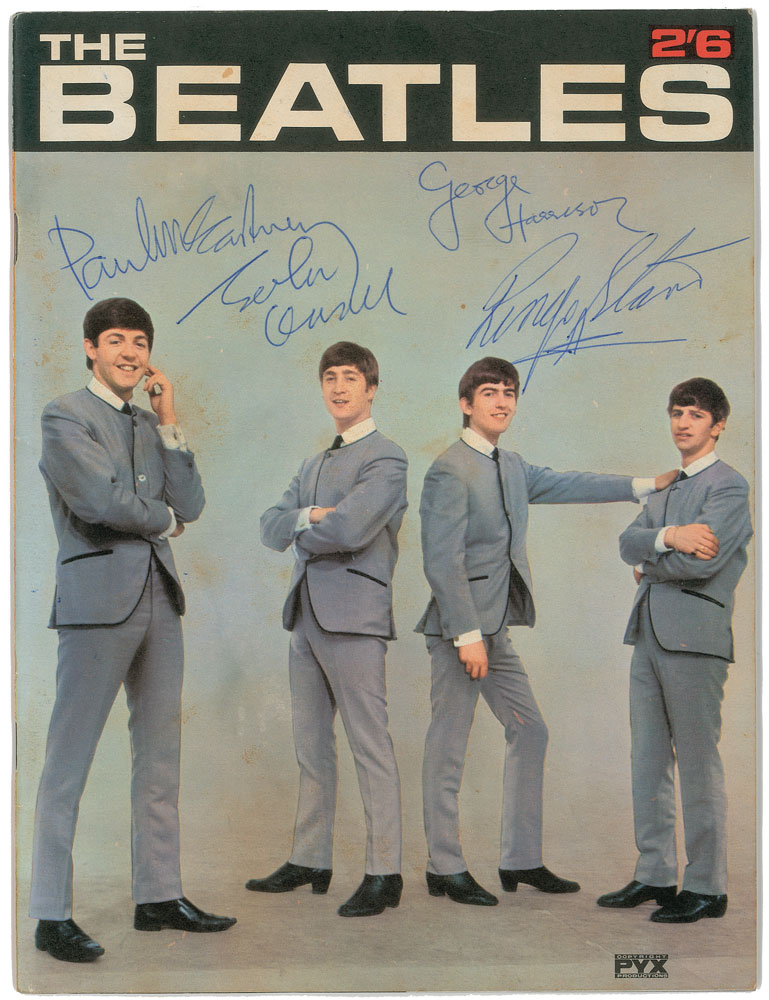 Rare and early 1963 PYX magazine, signed before their performance behind a protective cage

Supremely rare vintage UK Beatles magazine from 1963, published by PYX, 7.25 x 9.5, 28 pages, featuring a classic color Dezo Hoffman photograph of the band in their matching gray collarless suits on the cover, beautifully signed on the front cover in blue ballpoint, “Paul McCartney,” “John Lennon,” “George Harrison,” and “Ringo Starr.” Accompanied by an original ticket from their December 14, 1963, performance at the Wimbledon Palais, where the signatures were obtained a few hours before the show and a certificate of authenticity from Beatles expert Frank Caiazzo. In fine condition, with some scattered mild toning to front cover, not at all detracting from the crisp and bold signatures, and a few trivial spots to back cover. This was the band’s only performance ever at the Wimbledon Palais, playing a special show for 3000 members of their Southern Area Fan Club. The venue’s management was so concerned about damage by the fans, the band performed with a steel-cage partition between themselves and the crowd. Earlier in the day, around 1:30 PM, they met fans and signed autographs from behind the bar, but had to cut their meet and greet short when the lines became too long—the show started at 4PM. Following the concert, there was a ‘grand public dance’ in the ballroom after 7:30 PM—an event to which only 1,000 fan club members were allowed to attend—these surviving tickets are quite rare. The band seldom signed magazines, and luckily the original owner of this one was near the front of the line before the show. Pre-certified Roger Epperson/REAL and RR Auction COA.