Eldridge’s personal materials from a lifetime of jazz—featuring his trumpets, contracts, records, and more 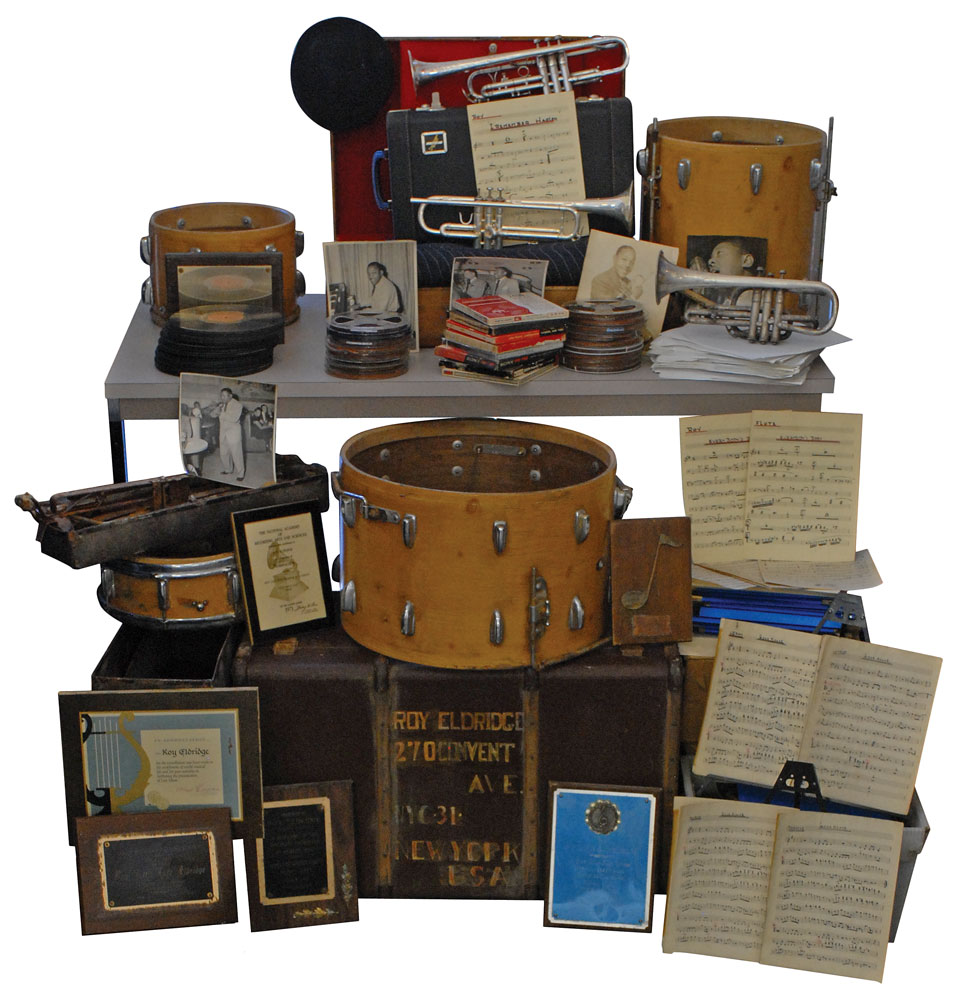 Eldridge’s personal materials from a lifetime of jazz—featuring his trumpets, contracts, records, and more

Nicknamed ‘Little Jazz,’ Roy Eldridge (1911–1989) was a jazz trumpet player known for his sophisticated use of harmony, virtuosic solos, and mastery of the instrument’s highest register. His prolific career lasted decades, seeing—and influencing—the development of jazz from its beginnings to its peak. His first brush with stardom came at age 14, when his brother took him along to a 1925 rehearsal session that included Duke Ellington, Rex Stewart, and Benny Carter. Eldridge hit the road on his own three years later, playing the carnival circuit and delighting crowds with note-for-note trumpet renditions of the most popular saxophone solos of the day. After moving to Harlem, and later Chicago, Eldridge emerged as one of the top jazz trumpeters in the world, sought after by venues, bands, and recording studios alike—Artie Shaw and Gene Krupa were both willing to defy social convention, and sometimes law, by inviting him into their bands, using him as a featured soloist in a time when black musicians were barred from white groups. He went on to tour in Europe under the wing of jazz impresario Norman Granz and record with the likes of Ella Fitzgerald, Coleman Hawkins, Charles Mingus, and Eric Dolphy through the 1950s and 60s. Even a stroke in 1970 couldn't to slow him down, as he took on the duties of bandleader at a New York jazz club for the next decade. Just as his career serves as a microcosmic summary of jazz history, his personality typified the spirit of jazz—Granz later said of him, 'Every time he's on he does the best he can, no matter what the conditions are. And Roy is so intense about everything, so that it's far more important to him to dare, to try to achieve a particular peak, even if he falls on his ass in the attempt, than it is to play safe. That's what jazz is all about.' Featured here is an extraordinary collection of Eldridge's papers, instruments, sheet music, records, photographs, posters, a large trunk, and other personal effects, chronicling his career as one of the most influential swing musicians of his era.

Among his papers are a wide variety of letters, contracts, tax returns, set lists, Christmas cards, checks, bank statements, and appointment books. Particularly notable among this group are: signed contracts dated between 1953 and 1980, including his 1965 tour of Europe and performances at the Downbeat Jazz Festival in Chicago and New York's Museum of Modern Art; his 1955 life insurance policy; three of his credit cards circa early 1970s, each signed with his given name, "David R. Eldridge"; two Christmas cards signed by Ella Fitzgerald; itineraries for tours with Ella Fitzgerald and Oscar Peterson; typed lyrics for 'TV Is The Thing'; ALSs sent to his wife; and a vintage signed photo of Sugar Ray Robinson, inscribed to "Little Jass [sic]." Unsigned photos are of a wide array of dates and sizes, with everything from candid snapshots to oversized prints, dated from the 1930s through 1970s. A few scrapbooks are also included. All paper material is in very good to fine condition, with dampstaining and moisture exposure to many pieces.

Especially impressive are hundreds of pieces of handwritten sheet music in both ink and pencil, as well as some facsimile copies of the handwritten originals. Song titles include: 'I Remember Harlem,' 'Saturday Night Fish Fry,' 'A Lot of Livin'’ (bearing a "Count Basie Orch." stamp), 'Don't Do Me Like That,' 'Cottontail,' 'Fly Me to the Moon,' 'Let Me Uptown,' and 'Everybody do the Charleston.' Also includes full handwritten scores of each instrument's part for a number of songs, including 'Rockin' Chair' and 'After You've Gone' arranged by Quincy Jones, as well as 'Easter Parade,' 'I Remember Harlem,' and 'Basin St. Blues.'

Instruments included are two trumpets, a cornet, Roy’s drum set made up of four drum shells of various sizes with drum kit equipment and a few other percussion instruments, and his brother Joe Eldridge’s Martin saxophone. The most important trumpet is a Benge 5x trumped stamped "Resno-Tempered Bell, Custom Built by E. Benge, Los Angeles, Calif.," and the number 13671 impressed into the side of the middle valve, with ML impressed on the other side. The serial number dates the trumpet to 1974. There are a few small dimples, but it is in tested, working condition. Includes the original Benge case (with Roy's name & address label on the case), 3 or 4 mouthpieces, and three mutes. Second trumpet is a silver-plated circa 1928–30 King Liberty model, impressed with the serial number 78397 on the second valve. The trumpet has a few dents and rust spots, otherwise fine condition. Instrument is housed in his large tan trumpet case, labeled Roy Eldridge, with red lining from the 1940s–1950s. The cornet is a Carl Fischer's American Model, serial number 77734, with heavy corrosion to much of the horn. Various other brass instrument accessories are also included.

The collection of recordings consists of over 100 acetates, 300 78 rpm records (1930s–1950s), studio recordings, and nearly 100 reel-to-reel tapes. Many of the acetates are original radio air checks and the tapes are reels of live concerts, broadcasts, and rehearsals. Acetates are in extremely fragile condition, many becoming delaminated and flaking. The tapes and 78s are generally in fine condition. A detailed list of the records is available HERE, and a comprehensive list of the tapes is available HERE.

Twelve of his awards are also present, including the plaque he received in recognition of his 1971 Grammy nomination for "Best Jazz Performance by a Group, 'The Nifty Cat,' Album." Other award plaques are from Down Beat (1946), the Blue Note (1984), International Jazz Federation (1981), and various smaller organizations and universities. While the Grammy plaque is in fine condition, most others exhibit heat soiling and moisture exposure.

To top it off is Eldridge's black beret, a style statement of many of the great jazzmen and their contemporaries—a look made most famous by the likes of Dizzy Gillespie and Thelonious Monk, both of whom recorded with Eldridge. Eldridge is often cited as one of Gillespie's greatest influences—they even collaborated on an album together in 1954, entitled Roy and Diz.

Eldridge, who died in 1989, ‘was a keeper—he kept stuff around.’ Additionally included are 50 pages of an incomplete autobiography Eldridge started writing in the 1950s. He saved airplane tickets, laundry slips, Christmas cards, canceled checks, and thousands of jazz photographs and homemade recordings in the cluttered basement and attic of his house at 194-19 109th Avenue in Hollis, Queens. We have a Christmas card from the trumpeter Buck Clayton, some canceled checks to band members from the Roy Eldridge Orchestra, a laundry receipt from a London hotel, business cards, note pads, and so much more. Also saved were several photographs of Eldridge performing with Coleman Hawkins and Thelonious Monk from 1945 and posters of his tour with Ella Fitgerald. Not to mention the audio recordings of Eldridge playing, including approximately 200 hours of reel-to-reel tapes and approximately 350 78 rpm records. The music ranges from the 1930s to the 1980s and includes private sessions in musicians’ homes and big band concerts recorded from live radio broadcasts. One tape is a recording of Woody Allen playing clarinet with Eldridge and Gerry Mulligan. Overall, this is a stunning archive of jazz history. Eldridge's influence on the genre—serving as a bridge from swing to bebop—is unquestionable, and this group of his personal effects traces that development. With everything from his personal instruments to unheard recordings of he and his collaborators, it is remarkable in depth and breadth, it is an instantly impressive collection of the highest interest to any jazz aficionado. Due to the enormity of the collection please be advised that extra shipping charges will apply. The sheer overwhelming volume of items precludes a complete list, however, there is a very detailed inventory list of the recordings made by WKCR Jazz Radio DJ Ben Young, Phil Schapp and staff with notes on the 1920s-1970s studio recorded discs and commercial records and a list of the reel-to-reel tape recordings. Interested parties are strongly advised to view the collection in person at our offices, as this collection is sold as is, and no returns will be accepted. Many items have been exposed to moisture and exhibit blemishes or a musty odor consistent with such. Large personal collections such as this are seldom offered as a whole, and there are certainly still many discoveries that lie within. A truly rare find! RR Auction COA.