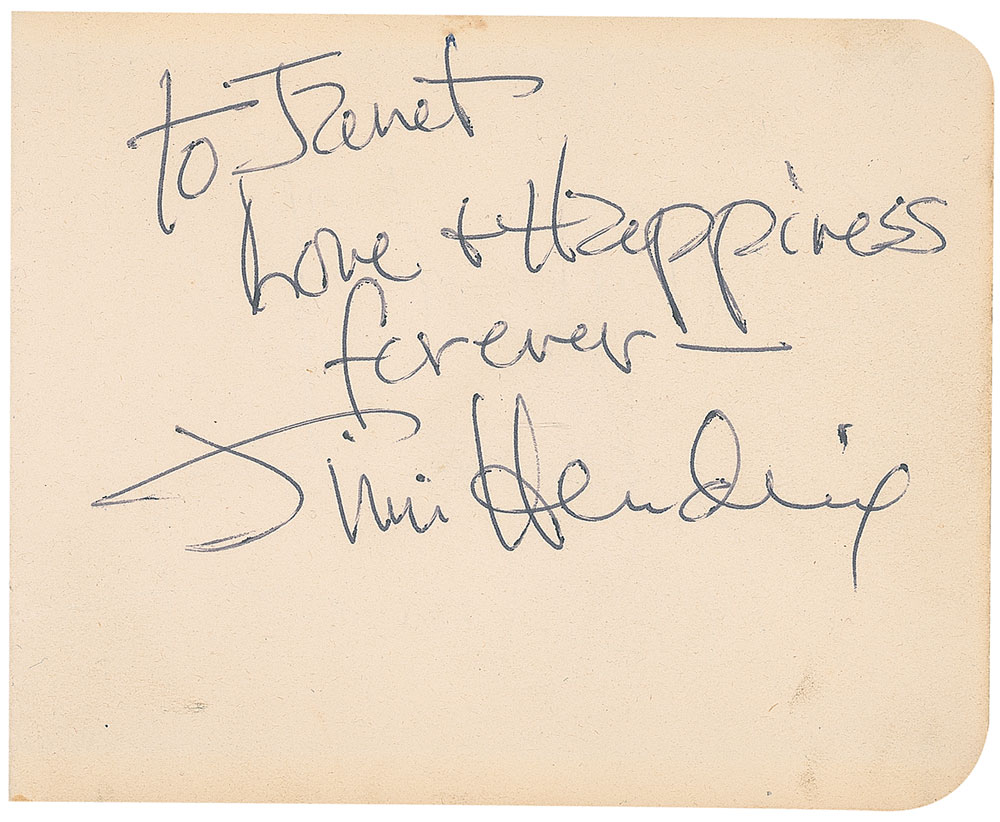 Vintage ballpoint signature and inscription, “To Janet, Love & happiness forever, Jimi Hendrix,” on an off-white 4.75 x 4 album page. Page is housed in its original 5 x 4 autograph album, and is also signed inside, “Love to Janet, Mitch xxx,” and also signed by Cat Stevens, Engelbert Humperdinck, and John, Gary, and Scott Walker. In fine condition. All the signatures were obtained by a 12-year-old fan backstage at the De Montfort Hall in Leicester, England, on April 16, 1967. Accompanied by a letter of provenance from the original recipient of the signatures, which reads, in part: “The autographs in this book, the principle one being Jimi Hendrix were signed for me, I believe in 1967 at De Monfort Hall, Leicester, England…I went to De Mont as it was locally known, with my father who was in the ambulance service…Because of his service he was able to chat up the manager and so gained permission for me and him to go backstage to meet the stars…[Jimi] was on stage doing a sound check, in full stage clothes…Jimi was lovely, smiled, called me over and asked my name. He then signed the book for me.” Also accompanied by a copy of a photo of Hendrix sitting backstage with Cat Stevens, Humperdinck, and Gary Walker. Hendrix and the Experience appeared at De Montfort Hall as part of a package tour alongside The Walker Brothers, Cat Stevens, Engelbert Humperdinck, and others. A superlative signature, with impressive provenance, from the tour that introduced Hendrix to British audiences for the first time and just a few months before his incendiary American debut performance at the Monterey Pop Festival on June 18th, 1967. Pre-certified Roger Epperson/REAL and RR Auction COA.