The staunch anti-slavery evolutionist returns to a constant source of uncertainty, the different lice plaguing Europeans and “the Negroes born in N. America” 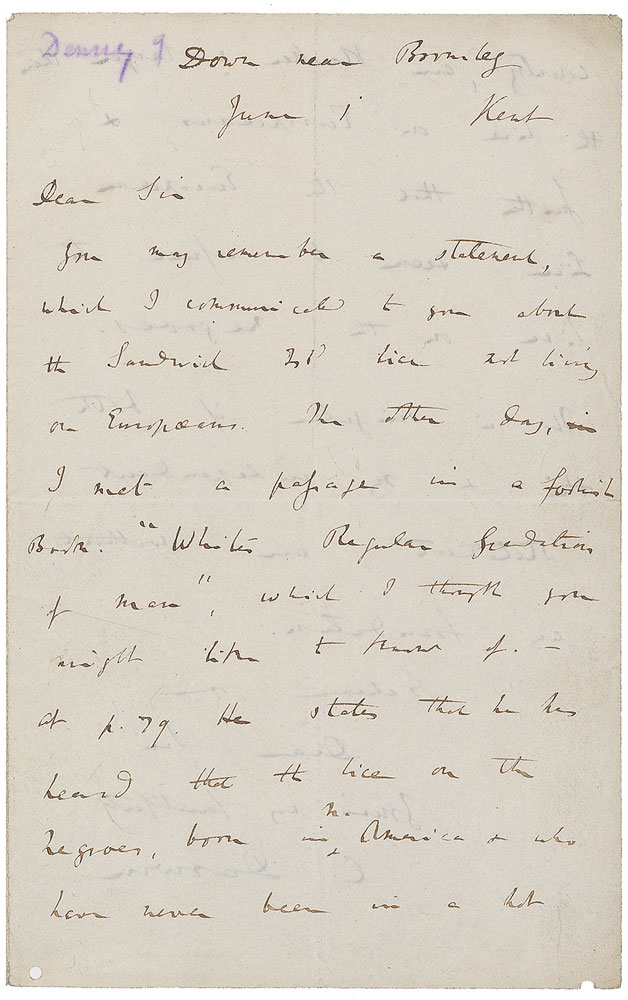 The staunch anti-slavery evolutionist returns to a constant source of uncertainty, the different lice plaguing Europeans and “the Negroes born in N. America”

ALS signed “C. Darwin,” one page both sides, 5 x 7.75, June 1 [1844]. Letter to an unidentified gentleman, most likely entomologist Henry Denny. In full: “You may remember a statement, which I communicated to you about the Sandwich Islands lice not living on Europeans. The other day, I met a passage in a foolish book: ‘Whites Regular Gradation of Men,’ which I thought you might like to know of. At p. 79 he states that he has heard that the lice on the Negroes born in N. America and who have never been in a hot country, are blacker and larger than the lice on Europeans and further that the European lice seem to refuse to live on the Negroes. It is singular if both this and my independent statement, are without any foundation.” On the reverse of the second integral page, Darwin writes: “This letter returned by Dead Office. I hope you received the specimens, safely, which I sent by Post the other day.” In fine condition, with central horizontal and vertical folds, two small punch holes along bottom edge, and a purple pencil notation to top of first page.

As scientific racism permeated the academic world in the early 1800s, Darwin, a passionate abolitionist, searched for an ancient common ancestor that would unite the races. While sailing along the Chilean coast in 1834, he observed that the lice plaguing the inhabitants were significantly larger and darker than the English lice that spread among white Europeans. He also heard from an English whaler’s surgeon that these darker lice, infesting dark-skinned Sandwich Islanders, died promptly when they crawled onto British sailors. Intrigued by the possible implications of this observation, Darwin began collecting specimens for further research. A decade later, in May of 1844, he came across a “passage in a foolish book” by a Manchester physician named Charles White; while the observation of the different lice corroborated Darwin’s own findings, the remainder of the doctor’s work, which attempted to empirically prove that human races had distinct origins, with Europeans reigning supreme and Africans ranking alongside apes, seemed absurd. This letter, most likely written to Darwin’s friend, entomologist Henry Denny, who did significant work with lice and other parasitic insects, touches on an important topic in Darwin’s theory of evolution—and a tiny insect that continued to elude him throughout his career. Pre-certified John Reznikoff/PSA/DNA.