"Extensive collection of original drawings signed by a constellation of classical luminaries—the likes of Callas, Horowitz, and Menuhin" 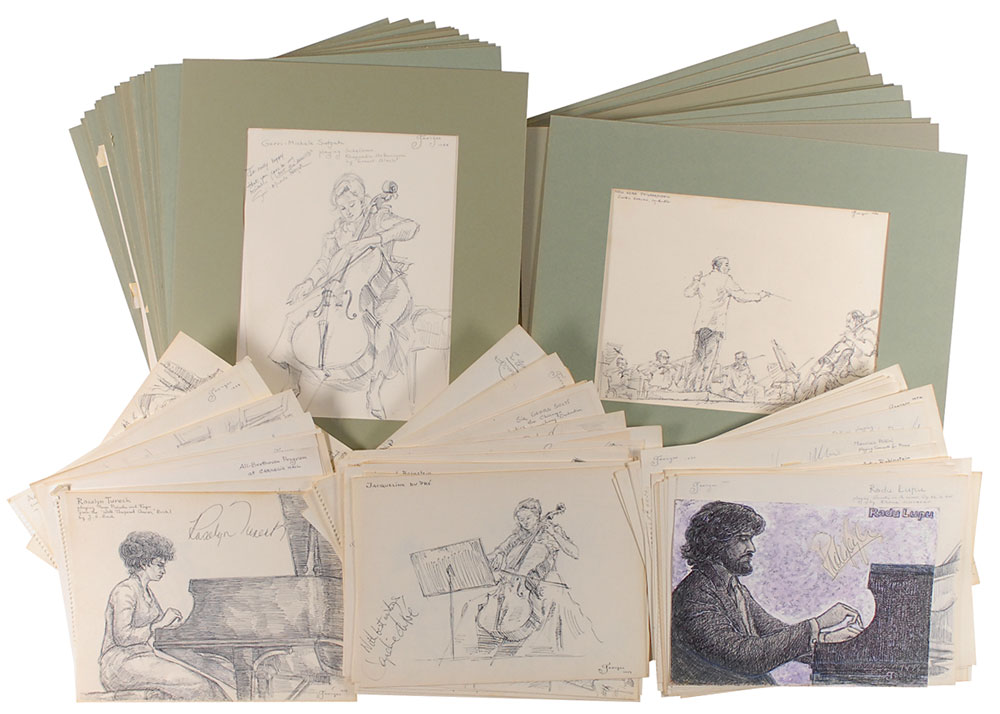 "Extensive collection of original drawings signed by a constellation of classical luminaries—the likes of Callas, Horowitz, and Menuhin"

Georges was born of Russian parents in Sarny, Poland, in 1924. Following art studies in Warsaw, he came to the United States in 1949 and attended the Brooklyn Museum Art School and the Art Student’s League.

While working as a translator for the American Express International Bank Corporation, Georges continued to pursue his avocation with gusto, exhibiting his artwork at venues throughout New York City. While he earned acclaim for his renderings of the city’s architectural landmarks, it was his on-the-spot drawings of musicians in performance that attracted an especially appreciative audience. In a 1973 article published in conjunction with two simultaneous exhibitions, Georges explained the genesis of his long-running engagement with the concert hall: ‘I’ve always enjoyed going to concerts, and one day I decided it would be fun to combine my interests in music and art and make sketches of musicians during performances.’ He went on to describe the process itself: ‘First of all, [the drawings] were executed rapidly, and often under difficult conditions. The lighting in concert halls is dim. And I had to work fast, because some performers were only on stage 20 minutes.’ The ultimate stamp of approval for his efforts came from the subjects themselves: ‘The nicest compliment I ever got was from pianist Arthur Rubinstein. When I asked him to sign the drawing, he said, Often when I see drawings of myself, I feel like putting a question mark on them—but this is not the case.’

Indeed, the most remarkable feature of Georges’s oeuvre, apart from the astounding range of performers who gladly expressed their approval and appreciation by signing, is the skill with which the drawings are accomplished. Longtime autograph collectors are only too aware of the curious genre of celebrity-signed ‘fan drawings,’ amateur efforts whose artistic merit seldom measures up to their sincerity. Georges’s work, on the other hand, not only demonstrates a consummate skill in capturing the likeness of his subject, but also the spontaneity and excitement of the moment.

The list of Georges’s subjects reads like an honor roll of classical music in the early 1970s, with select representation by such blues and jazz giants as Duke Ellington, Count Basie, Sarah Vaughan, and others. The full spectrum of classical music is represented, including both instrumentalists (Argerich, Arrau, Bachauer, Casals, Horowitz, Menuhin, Perlman, Rampal, Rubinstein, Segovia) and singers (Bergonzi, Caballe, Schwarzkopf). A number of major composers (Barber, Boulez, Copland, Penderecki) make an appearance, as do some of the greatest conductors (Bernstein, Giulini, Karajan, Ormandy, Solti) ever to take to the podium. While the collection is rich in legends—in many cases, represented by multiple examples—ardent fans and specialists will surely recognize the special mystique and poignancy of certain names. The famed cellist Jacqueline du Pré, for example, signed her drawing in 1973—almost certainly during the last public engagements of her brief, brilliant career, which came to an untimely end in New York in February of that year due to the advancing symptoms of multiple sclerosis. Diva assoluta Maria Callas signed at Carnegie Hall in 1974, following one of the final performances of her colorful, storied, stormy career. A host of the other performers who signed earned a special place in the hearts of cultish fans who particuarly revered their interpretations of Bach (Rosalyn Tureck), Wagner (Erich Leinsdorf), or modern masters (Mstislav Rostropovich). Most of the drawings are dated, and many even include the locale and work being performed. A few are signed by multiple performers.

Also included are several other unsigned drawings by Georges (including additional renowned performers, venues, and other subjects) and photos, leaflets, clippings, and articles related to his career, many of which include reproductions of drawings from the collection. Save for some mild scattered toning and handling wear, the drawings are in fine, clean condition, and ready for display. A one-of-a-kind discovery for the devoted collector.

A complete list of signers is available by clicking here; those marked with an asterisk (*) are represented by multiple examples. Names of ensembles indicate that at least one member (usually several, sometimes all members) have signed. RR Auction COA.