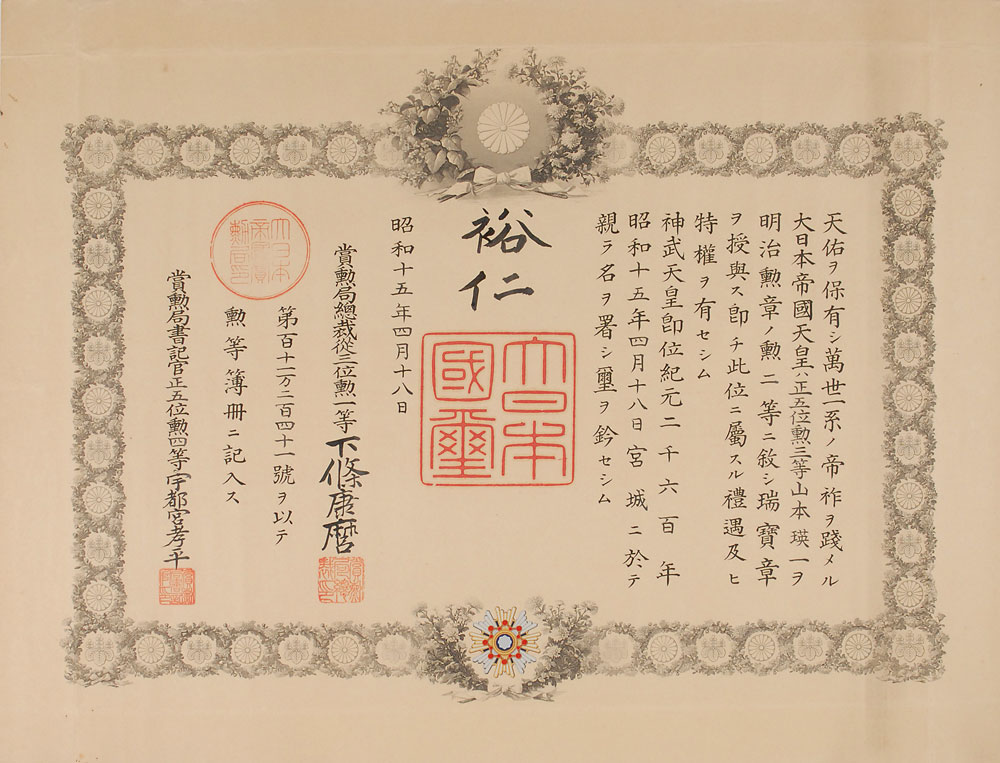 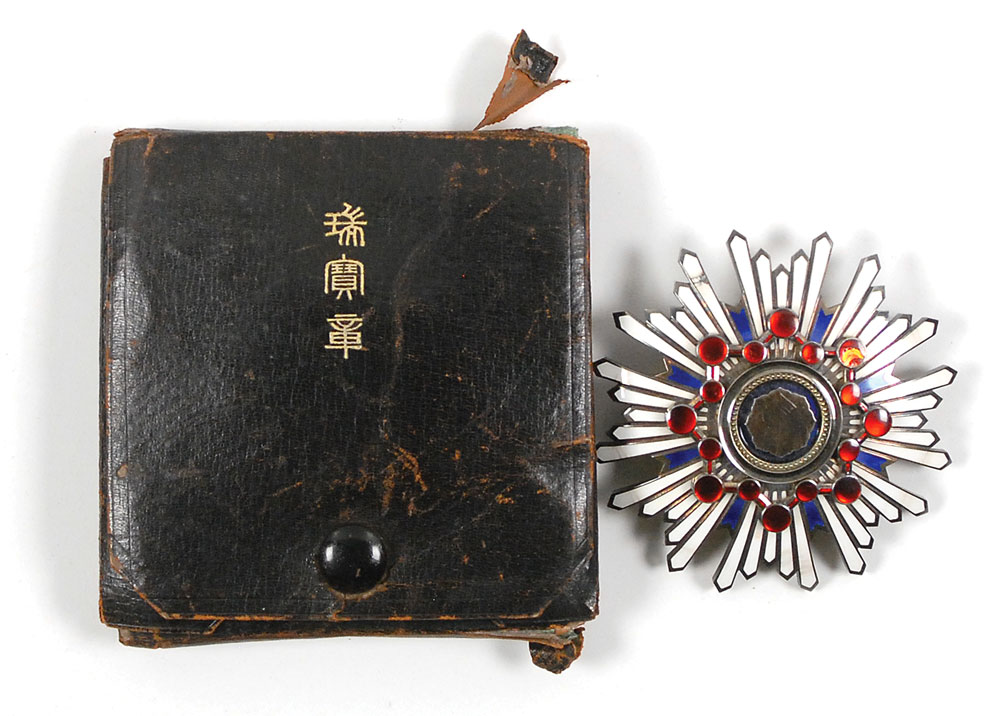 Incredibly rare manuscript DS in Japanese, one page, 23.5 x 18, April 18, 1940. Document in which the Emperor of Japan confers the Imperial Order of Meiji upon Eiichi Yamamoto. In full (translated): “By the grace of Heaven, Emperor of Japan, seated on the throne with unbroken imperial line, hereby confers the Second Class of the Imperial Order of Meiji upon Eiichi Yamamoto who is currently decorated with Senior Fifth Rank and the Third Order of Merit, and invests him with the insignia of the Order of the Sacred Treasure, Gold and Silver Star, granting him with the benefits and privileges associated with this rank and honor. I have set my hand and caused the seal of the Empire of Japan to be affixed at the Imperial Palace, Tokyo, this 18th day of April, 1940.” Boldly signed by Hirohito and countersigned by Yasumaro Shimojo, Junior Third Rank, the First Order of Merit, Director of the Decoration Bureau and by Kohei Utsunomiya, Senior Fifth Rank, the Fourth Order of Merit, Clerk of the Decoration Bureau. In fine condition, with folds around the perimeter of the document and some scattered light creases.

Included is the Star of the Order of the Sacred Treasure, 2.75” diameter, presented to Eiichi Yamamoto. “Kunko Seisho” is engraved on the reverse of the badge, which identifies it as praising achievement. Award is housed in its original 4 x 4 leather and felt case, gilt-imprinted on the cover that it is the Order of the Sacred Treasure, with the case showing expected minor wear. The insignia of the order incorporates symbols for the three imperial treasures: the Yata Mirror, so sacred that not even the Emperor is allowed to look at it; the Yasakani Jewel, made of the finest jade; and the Emperor’s personal Sword. White enameled rays represent the sword (slight chip on one of the 40 rays). The central disc bearing an eight-pointed silver star represents the mirror, surrounded by a wreath with red-enameled dots (one with slight chip) representing the jewel.

Established as the Order of the Meiji in 1888 by Hirohito’s grandfather, the Order of the Sacred Treasure is awarded to those who have made distinguished achievements in a wide variety of civil or military services, ranging from research fields, to social work, to state and local government. These documents, by which the Emperor himself honors a citizen, become a part of the recipient’s family legacy and rarely leave Japan. To our knowledge, this is the only non-diplomatic Hirohito document to ever appear at auction—made exponentially more remarkable by the inclusion of the badge with which it was issued. A vibrant and highly sought-after piece, signed by the Emperor just five months before Japan would sign the Axis Pact with Germany and Italy. Pre-certified John Reznikoff/PSA/DNA and RR Auction COA.