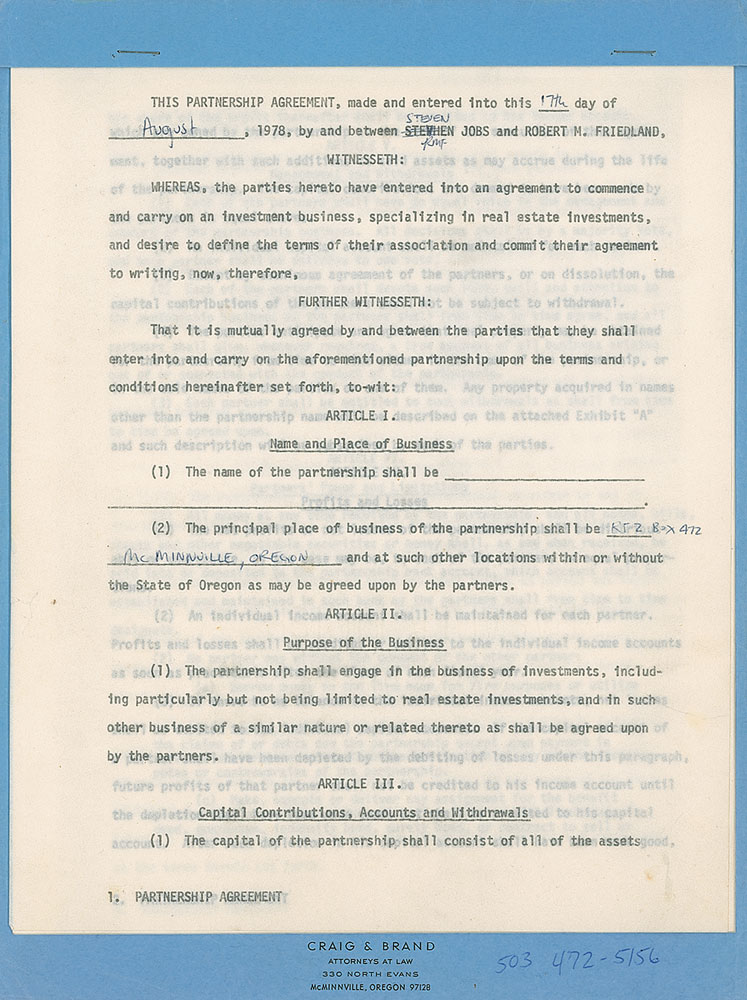 Very rare DS, signed “Steven Jobs,” eight pages, 8.5 x 11, August 17, 1978. Partnership agreement between Jobs and Robert Friedland for a place of business located at “Rt 2, Box 472, McMinnville, Oregon.” The eight-article document includes provision for the purpose of the business, “The partnership shall engage in the business of investments, including particularly but not being limited to real estate investments, and in such other business of a similar nature or related thereto as shall be agreed upon by the partners.” Other articles include capital contributions, profits and losses, managements, partner’s powers, and the dissolution of the partnership. Signed on page seven in blue ballpoint by Jobs and Friedland. The eighth page is labeled “Exhibit A,” listing a 170-acre property in Oregon for the business. Document is still stapled into its original legal folder. In fine condition, with expected light document wear. Accompanied by a full letter of authenticity from PSA/DNA.

Before they became billionaire business tycoons, Steve Jobs and Robert Friedland were young, acid-dropping Reed College students with an intense shared interest in Eastern spirituality. While in his first year at Reed, Jobs met the charismatic student body president (recently released from a two-year stint in federal prison for LSD possession), and was instantly drawn in. Dropping out of Reed and partnering with Apple co-founder Steve Wozniak to begin developing their computers, he spent a great deal of time with Friedland, taking spiritual trips to India and working on his communal farm and apple orchard near McMinnsville; numerous accounts, including one from Wozniak, have attributed the Apple name to Jobs’s time working in the orchard. Known for his uncanny ability to manipulate circumstances—and people—to grow his business ventures, Friedland was making a good deal of money from products coming from the orchard, and from his foray into the mining industry (which has led him to his current multi-billion-dollar status).

Though it is unclear which business pursuit Jobs partnered with Friedland on, this extremely rare and intriguing document solidifies claims of the strong connection between the two young entrepreneurs. With the success of the Apple II, which hit the market in 1977, and preparation for what would become one of the most successful IPOs in history (generating more capital than any other since Ford in 1956, instantly creating more millionaires than any company in history), Jobs had almost completely distanced himself from Friedland by 1980. In 30 years of business we have only offered one other Jobs item—a signature; this document, incredibly substantial and significant in its connection to a major figure in his life, is of the utmost rarity. RR Auction COA.