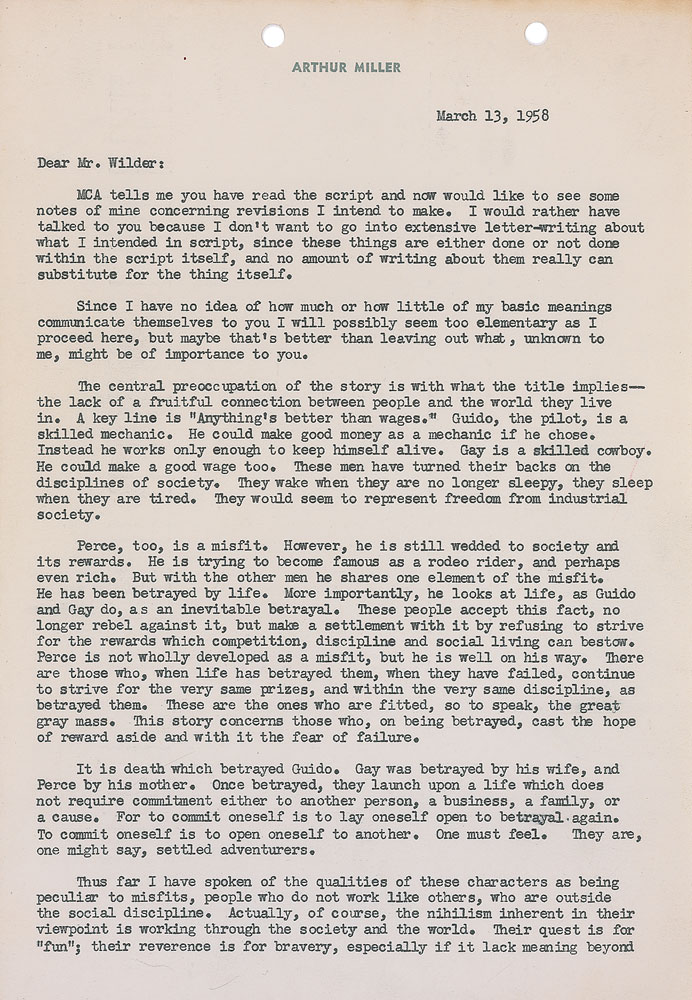 Historically significant TLS signed “Arthur Miller,” six pages, 7.25 x 11, personal letterhead, March 13, 1958. Letter to Billy Wilder. In part: “MCA tells me you have read the script and now would like to see some notes of mine concerning revisions I intend to make. I would rather have talked to you because I don't want to go into extensive letter-writing about what I intended in script, since these things are either done or not done within the script itself, and no amount of writing about them really can substitute for the thing itself…The central preoccupation of the story is with what the title implies—the lack of a fruitful connection between people and the world they live in…Among these men and in this environment, Roslyn is the catalyst. She too has been betrayed—by a husband who could live without ecstasy, by a life that had no beauty, by people who uphold moral conventions in order to conceal their illicit desires and actions. She is that idiot, in Dostoevski’s sense, whose childhood has never ended. She is a poet without words who must always make those about her uneasy until they have hurt her. In another context, another story, she is that thing of beauty which exists in order to be destroyed. She is a misfit in every sense but one—she cannot help committing herself. With her, to feel is to act. Her object in staying on here after the time required to get a divorce is to achieve indifference…I add now that in the present script I have perhaps not given as much of her past as a true impression of her requires. She is a girl out of a broken family, neglected by her mother whose husband deserted her when Roslyn was a child. She has struggled between two opposing forces—on the one hand an inevitable sense of her own worthlessness, on the other, an awareness of her beauty, a confidence in it, and at the same time a conviction that she is fated to be always cast aside and humiliated…Gay' s advice to her is, ‘Roll with it.’ Her reply is that she always did but cannot seem to anymore. In terms of her character this may require more development, I am not sure. It means that throughout her life, she could float from one relationship to another, many times ending them condemned and cast out by her partner, but always returning to life with gaiety, humor, interest. Once married, however, she could not so easily walk away once she had been humiliated. So that her decision to divorce represented an inchoate, instinctive choice whose repercussions she is living through in this story-the choice to refuse the role of the victim once and for all.” In fine condition, with punch holes to tops of each page.

The similarities between Marilyn and her Misfits character Roslyn are startling: a broken family life, a low self-worth dependent upon the adoration of others, an inherent childlike emotional state, and the mirroring of her own significant problems with her husband Arthur Miller; the likeness is not surprising given the circumstances. When Miller initially began to write the screenplay, he experienced a debilitating case of writer’s block, discarding his first draft and placing blame on his wife. A friend of Marilyn at the time recalled, ‘Marilyn blamed herself for his lack of vision…she feared she no longer inspired him.’ Originality so eluded Miller that he sculpted a cruel caricature of Marilyn, further agitating her fragile mental state. Marilyn’s makeup artist Allan ‘Whitey’ Snyder once recalled, ‘There were so many script changes in her part that Arthur made so often, she became less and less happy with her role and character…he had written a movie that seemed very personal, that drew from elements of the real Marilyn’s personality and her relationship with him, so that made it even more difficult to her…there were lines in that movie that were straight out of her experience with Arthur Miller.’

In this impressively articulate letter, Miller wrote of Roslyn that “her decision to divorce represented an inchoate, instinctive choice whose repercussions she is living through in this story-the choice to refuse the role of the victim once and for all.” Perhaps, subconsciously, this is what the playwright wished for his own troubled wife. She would, unfortunately, only continue to spiral out of control, especially after their real-life divorce, passing away four years later in August 1962. This volatile film-making experience would be Marilyn's last completed role. Pre-certified PSA/DNA and RR Auction COA.

This item is Pre-Certified by PSA DNA Precertified Letter
Buy a third-party letter of authenticity for $30.00