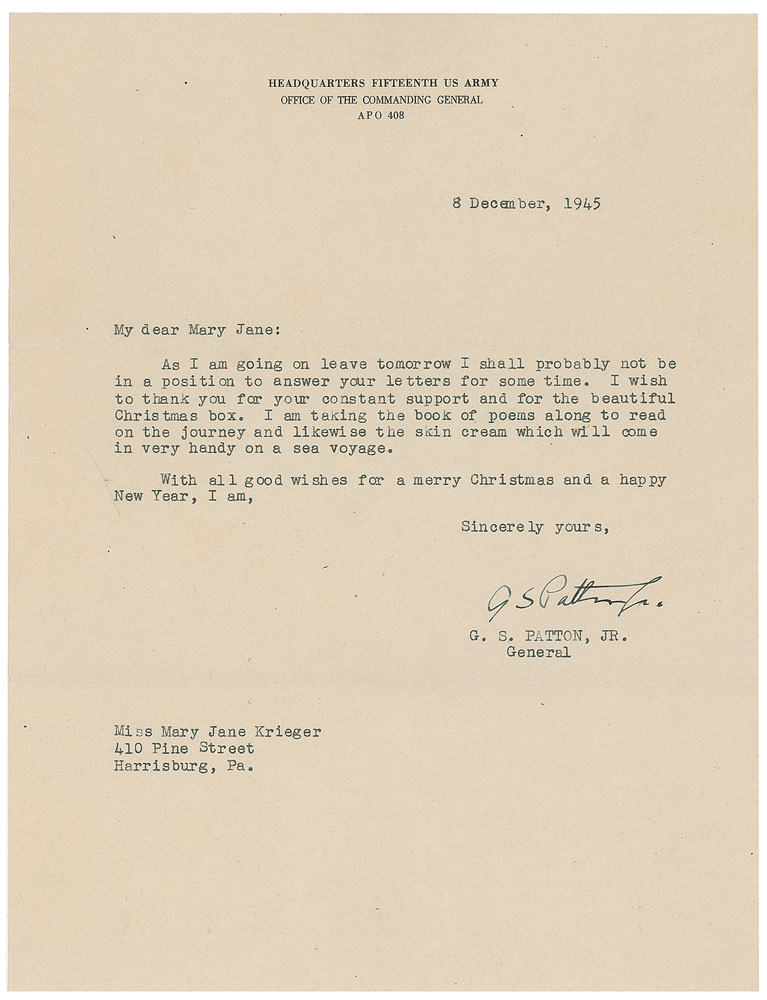 TLS signed “G. S. Patton, Jr.,” one page, 8 x 10.25, Headquarters Fifteenth US Army letterhead, December 8, 1945. Letter to Mary Jane Krieger. In full: “As I am going to leave tomorrow I shall probably not be in a position to answer your letters for some time. I wish to thank you for your constant support and for the beautiful Christmas box. I am taking the book of poems along to read on the journey and likewise the skin cream which will come in very handy on a sea voyage. With all good wishes for a merry Christmas and a happy New Year.” In fine condition. Accompanied by the original free franked mailing envelope, marked, “Free,” by Patton and signed in the upper left, “G. S. Patton, Jr.” Envelope is affixed to a portion of a scrapbook page made by Krieger, who writes under the envelope, “The last which my general wrote to me—was written 8 December 1945—just one day before the accident occurred which caused the death of my general. Postmarked the day the accident occurred.”

The day before leaving for a hunting trip with his chief of staff, Major General Hobart Gay, and Private First Class Horace L. Woodring, General Patton penned four letters, including this one to Mary Jane Krieger. Thanking her for the Christmas gifts she recently sent before taking his Christmas leave, he offered what would be his final regards to his longtime pen pal. The following day—the postmarked date of this letter—the car carrying the men to their relaxing weekend trip was hit by an oncoming truck. Suffering a broken neck and cervical spinal cord injury, Patton was instantly paralyzed from the neck down, and after twelve days in the hospital, died in his sleep. Upon his request to be ‘buried with my men,’ the great general was buried alongside other wartime casualties of the Third Army at the Luxembourg American Cemetery and Memorial. Affectionately notated by Krieger, “the last which my general wrote to me,” this historic letter marked the end of a remarkable life and friendship. With the letter to which Patton was replying now kept in the National Archives, this letter—explicitly referred to in The Patton Papers—is one of the most sought after correspondences from his papers. Pre-certified John Reznikoff/PSA/DNA and RR Auction COA.
For more information on the remarkable correspondence between Patton and Krieger, click here. Please be advised the seven images at the bottom of the page are for reference purposes only and not included with the item.