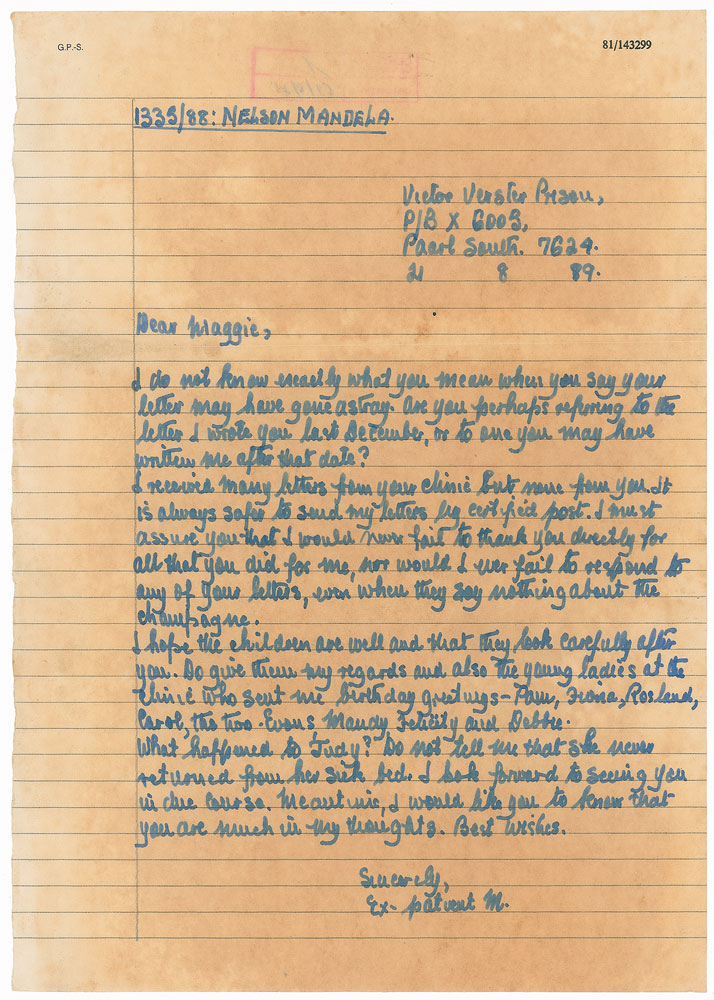 Rare and desirable ALS signed “Ex-patient M,” one page, lightly-lined, 8.25 x 11.75, August 21, 1989. Letter written from Victor Verster Prison in accordance with prison rules, to “Sister Margaret Douglas,” a nurse who cared for Mandela at the Constantiaberg MediClinic. In full: “I do not know exactly what you mean when you say your letter may have gone astray. Are you perhaps referring to the letter I wrote you last December, or to one you may have written me after that date?

I received many letters from your clinic but none from you. It is always safer to send my letters by certified post. I must assure you that I would never fail to thank you directly for all that you did for me, nor would I ever fail to respond to any of your letters, even when they say nothing about the champagne.

I hope the children are well and that they look carefully after you. Do give them my regards and also the young ladies at the clinic who sent me birthday greetings—Pam, Fiona, Rosland, Carol, the two Evans, Mandy, Felicity and Debbie.

What happened to Judy? Do not tell me she never returned from her sick bed. I look forward to seeing you in due course. Meantime, I would like you to know that you are much in my thoughts. Best wishes.” At the top of the page, Mandela prints his name and prisoner number, “1335/88: Nelson Mandela.” Overall somewhat irregular toning, not affecting the legibility of Mandela’s bold writing and signature, and show-through from a censor stamp on the reverse, otherwise fine condition. Accompanied by the original mailing envelope addressed in Mandela’s hand.

On December 8, 1988, twenty-six years into his life sentence, 70-year-old Nelson Mandela was transferred to what would be the final prison to hold him, Victor Verster Prison near Paarl. He was kept in a relatively comfortable warder’s house and given a personal cook, as well as permission to meet with many visitors and write as much as he pleased—a significant benefit after years of limitations. A year prior to writing this letter, Mandela was diagnosed with tuberculosis and transferred to the Constantiaberg MediClinic for treatment, where the recipient of this letter, “Sister Margaret Douglas,” was his nurse. As the outside world changed around him and the days of apartheid neared their end, Mandela held strong to his convictions, declining several conditional offers of his release and meeting with the country’s leaders to reach a final peace, including the newly elected President F. W. de Klerk. On February 2, 1990, just six months after this letter was written, de Klerk legalized all formerly banned political parties and unconditionally released Nelson Mandela—finally a free man after 28 years behind bars. With a lifetime of regulated correspondence, any letter from Mandela is extraordinarily scarce; this is the first we have offered in over 30 years of business. Pre-certified John Reznikoff/PSA/DNA and RR Auction COA.