The only complete set of flown lunar bibles in existence, including an Apollo 14 bible originally presented to the family of astronaut Ed White 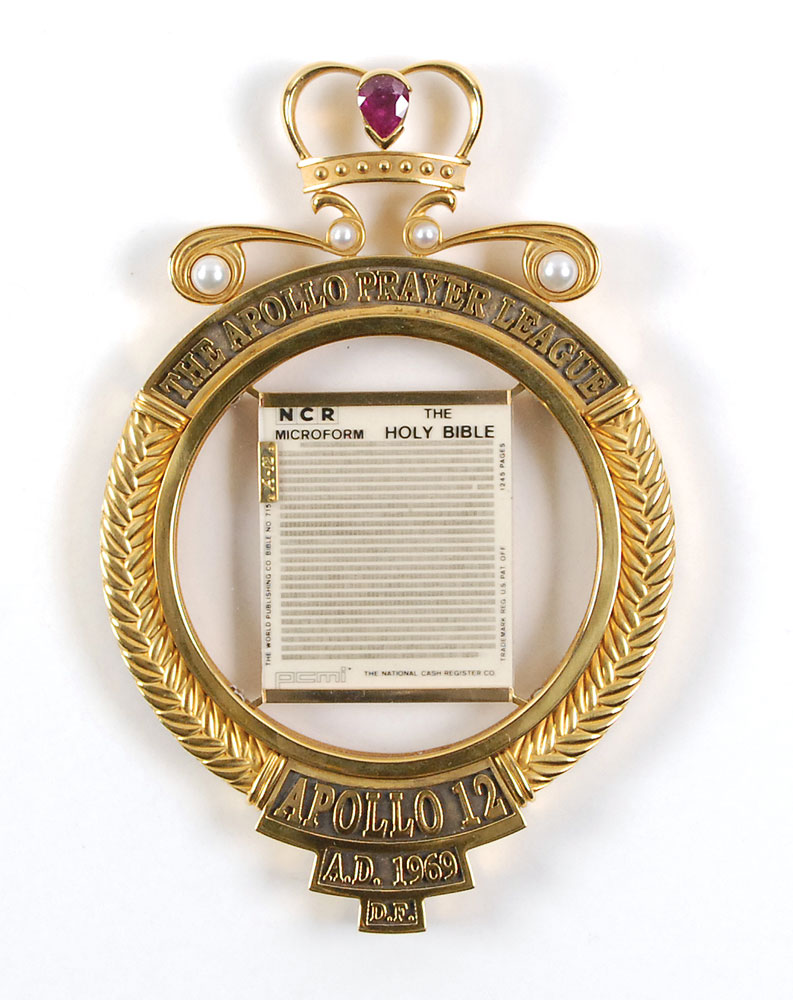 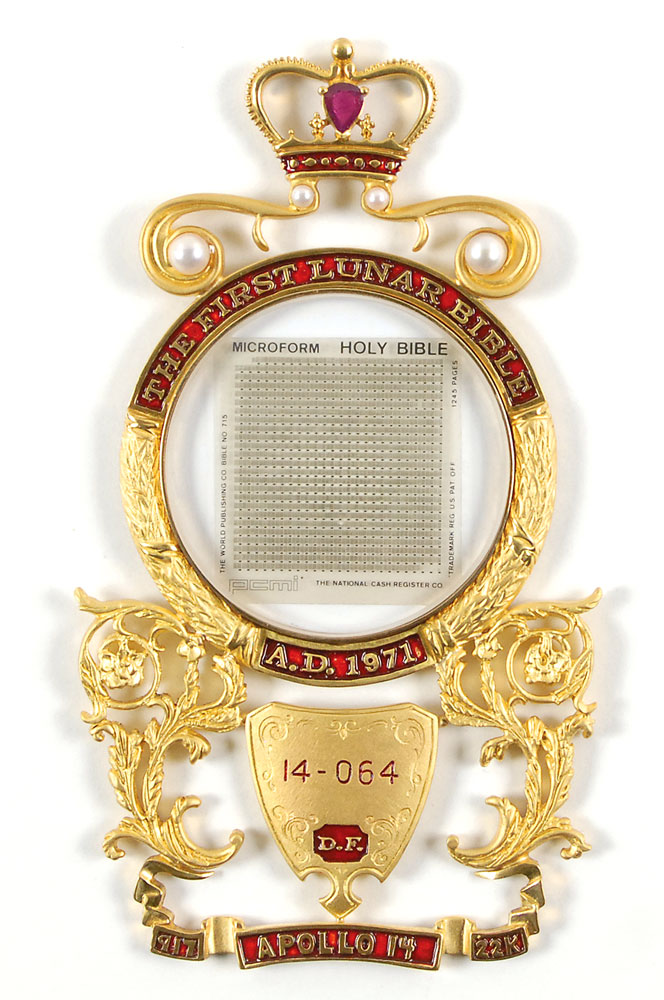 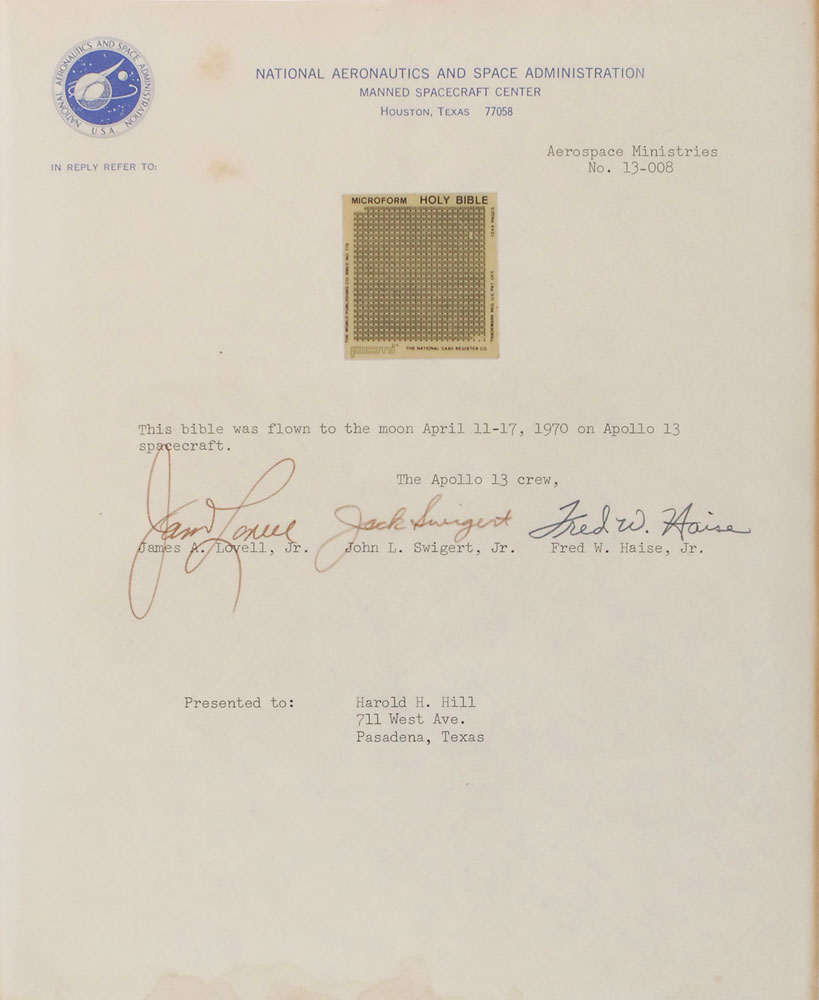 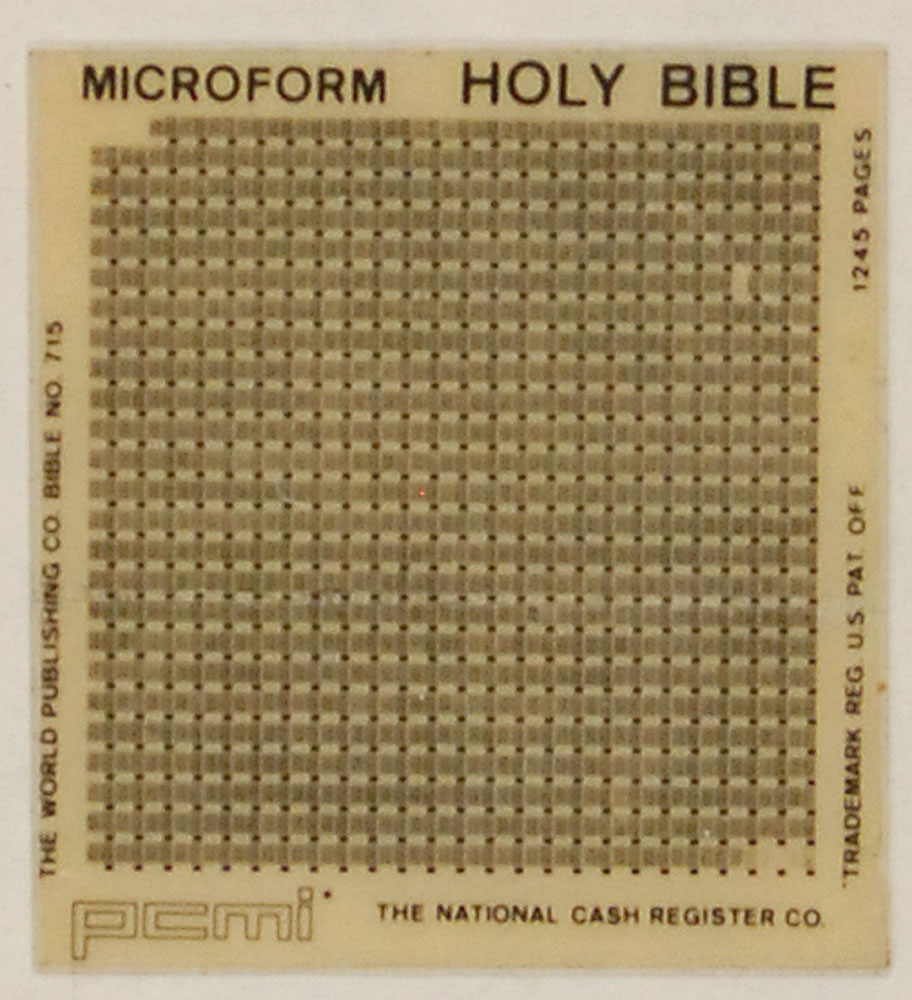 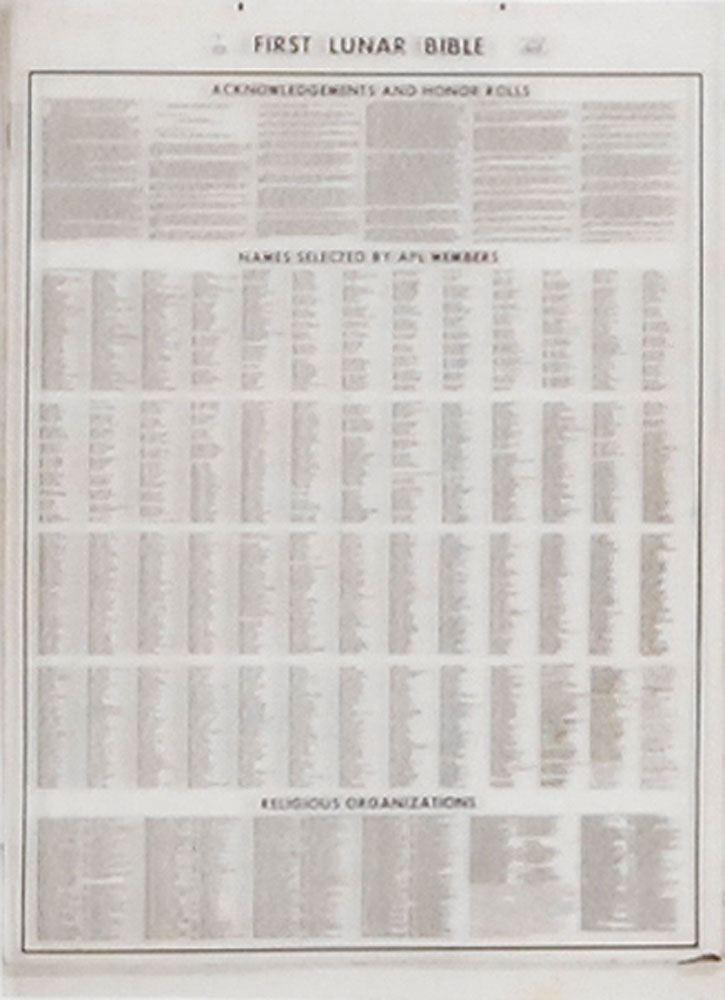 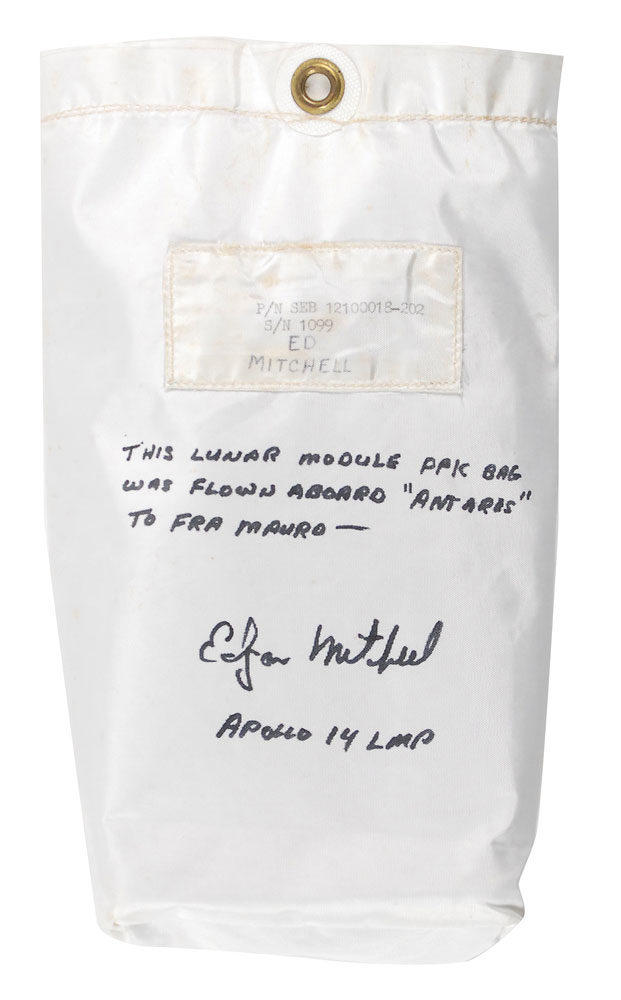 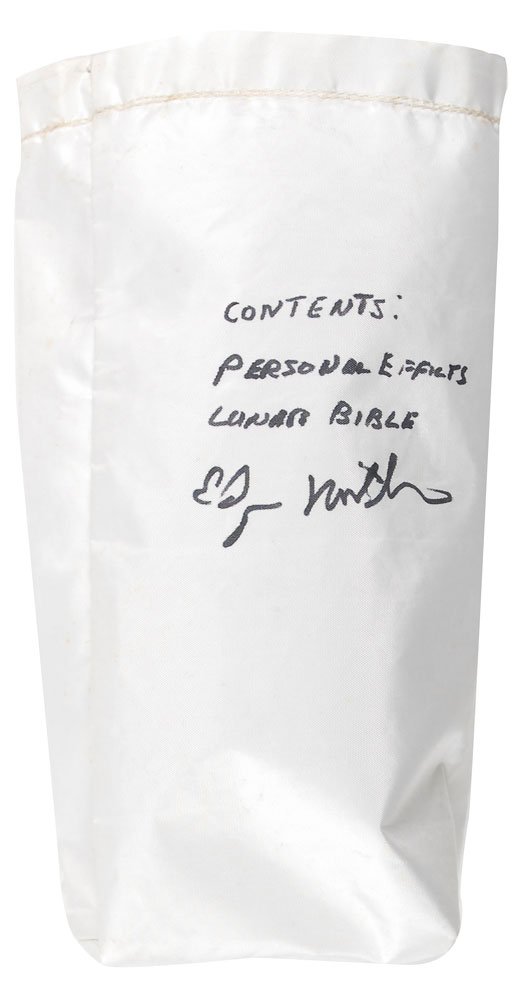 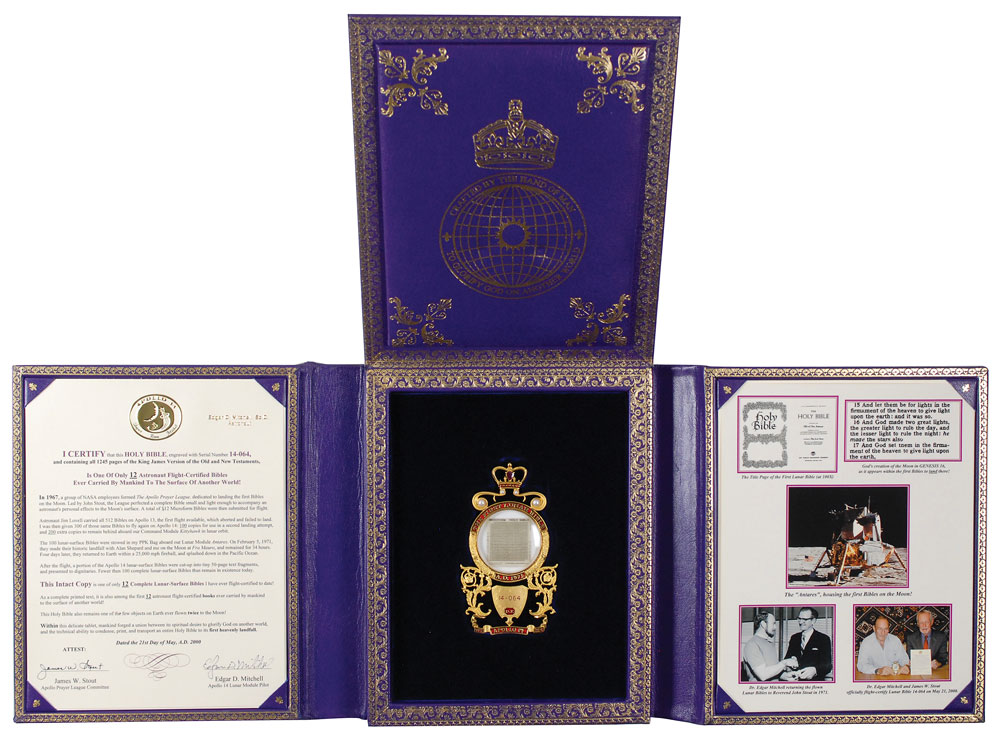 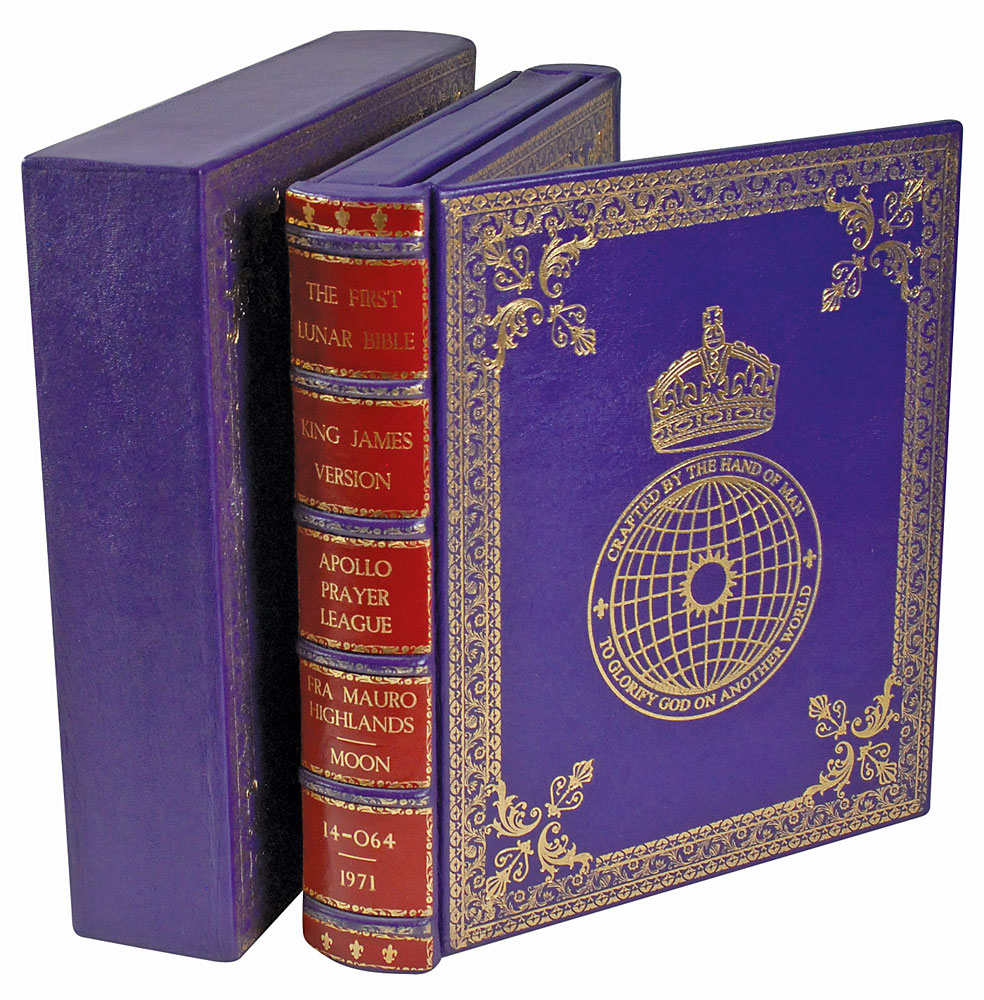 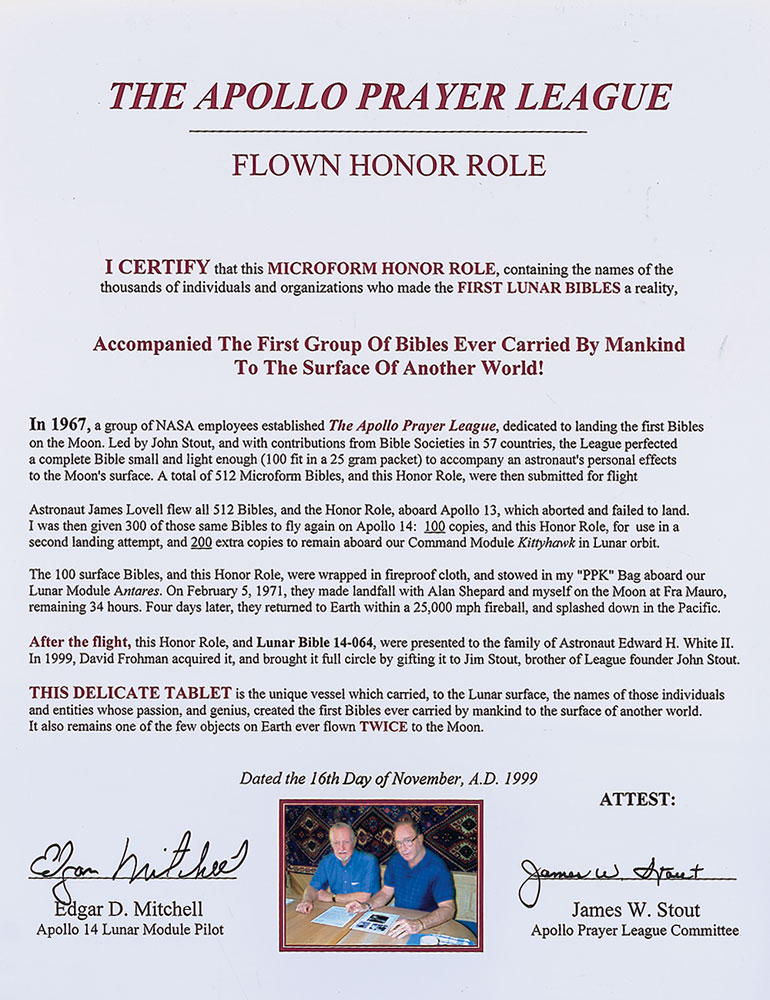 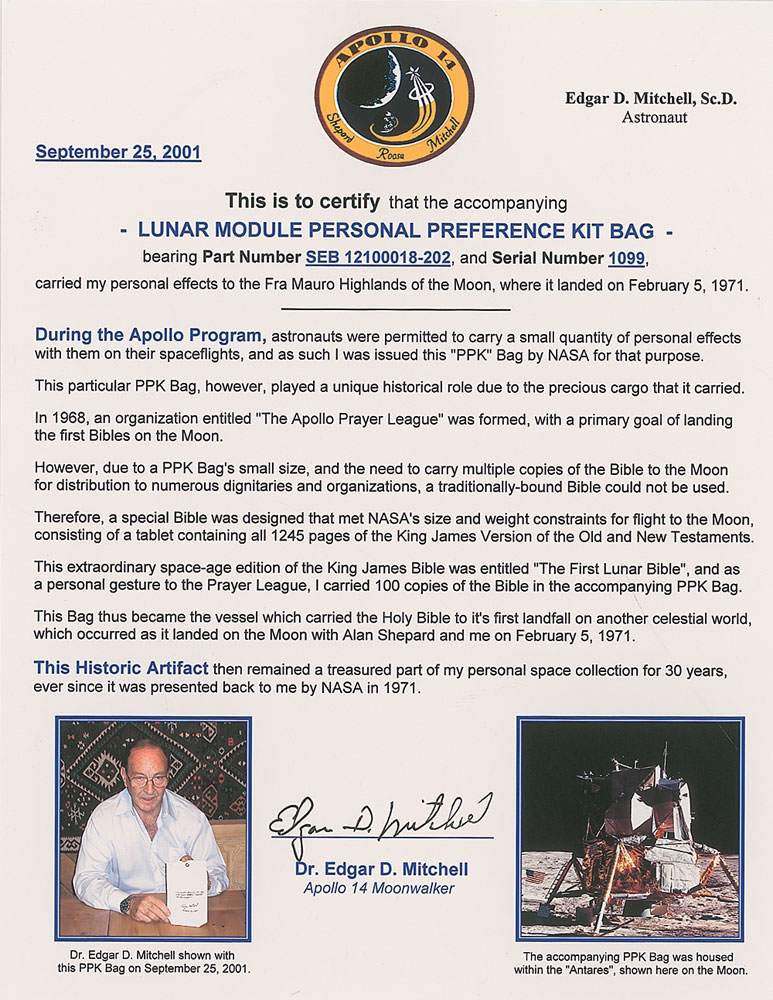 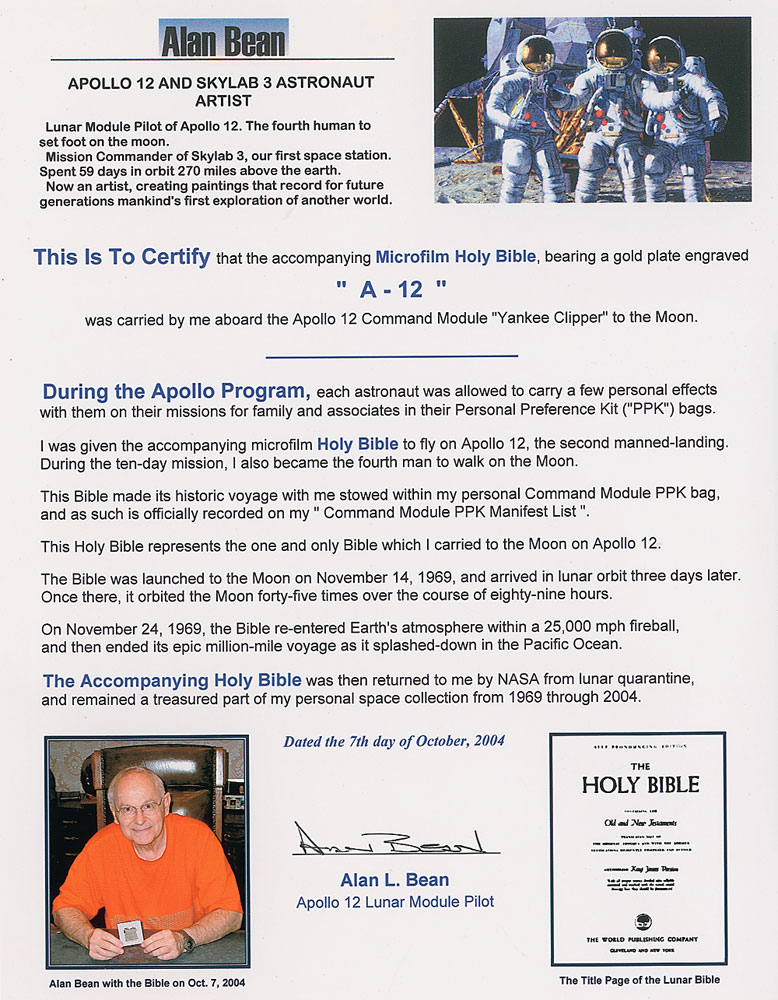 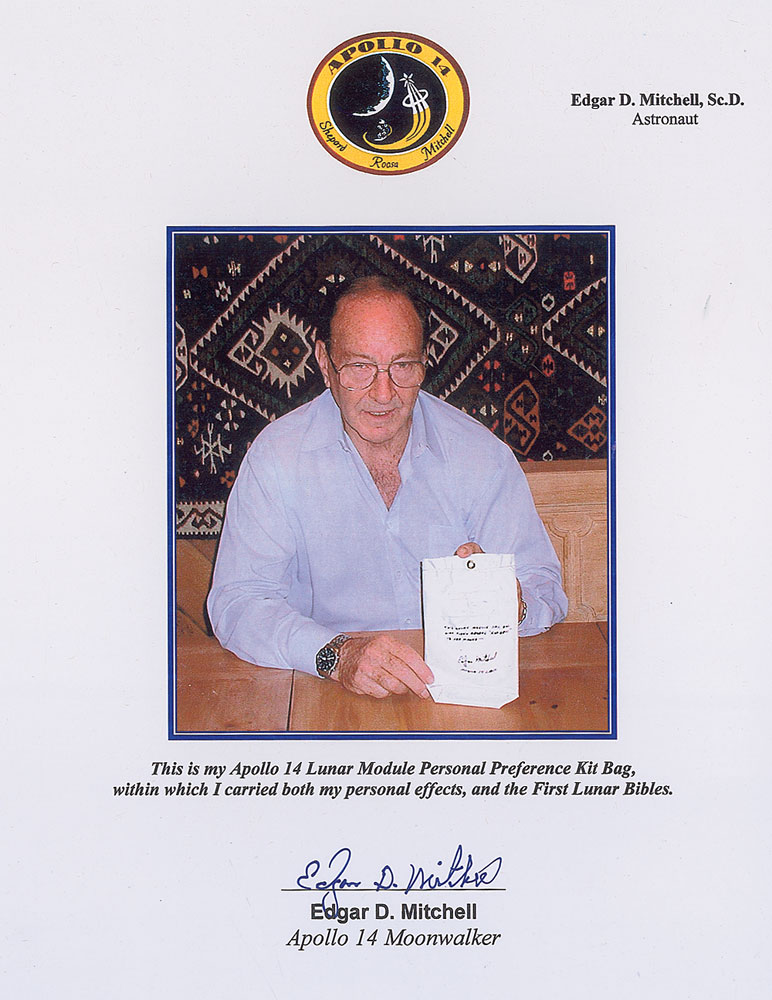 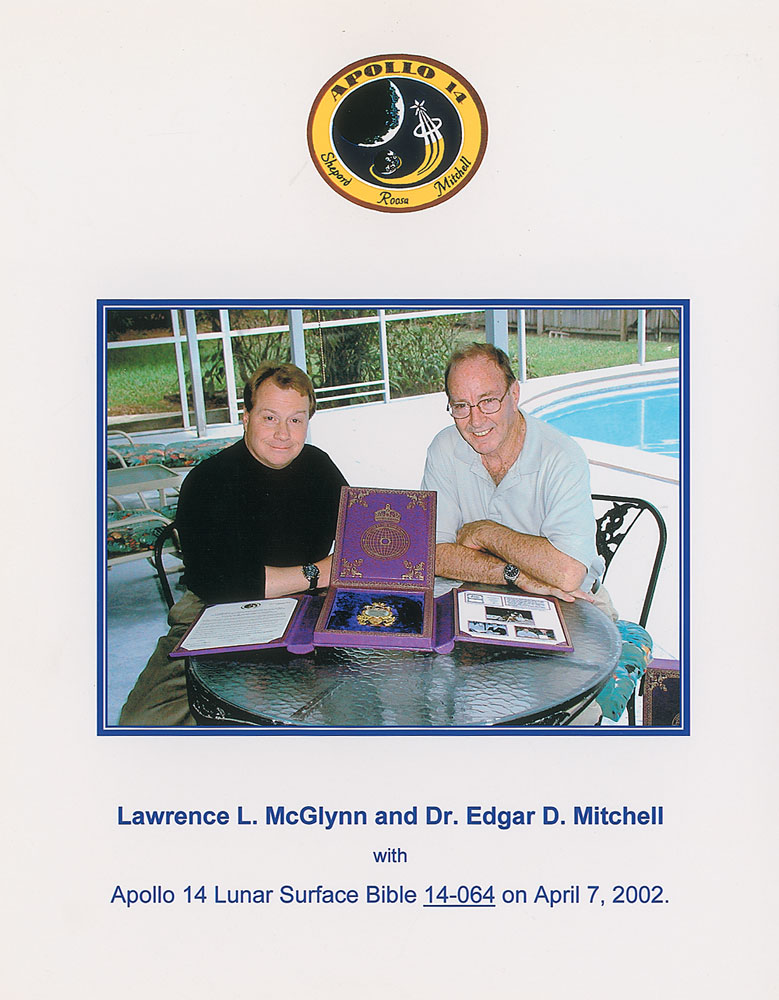 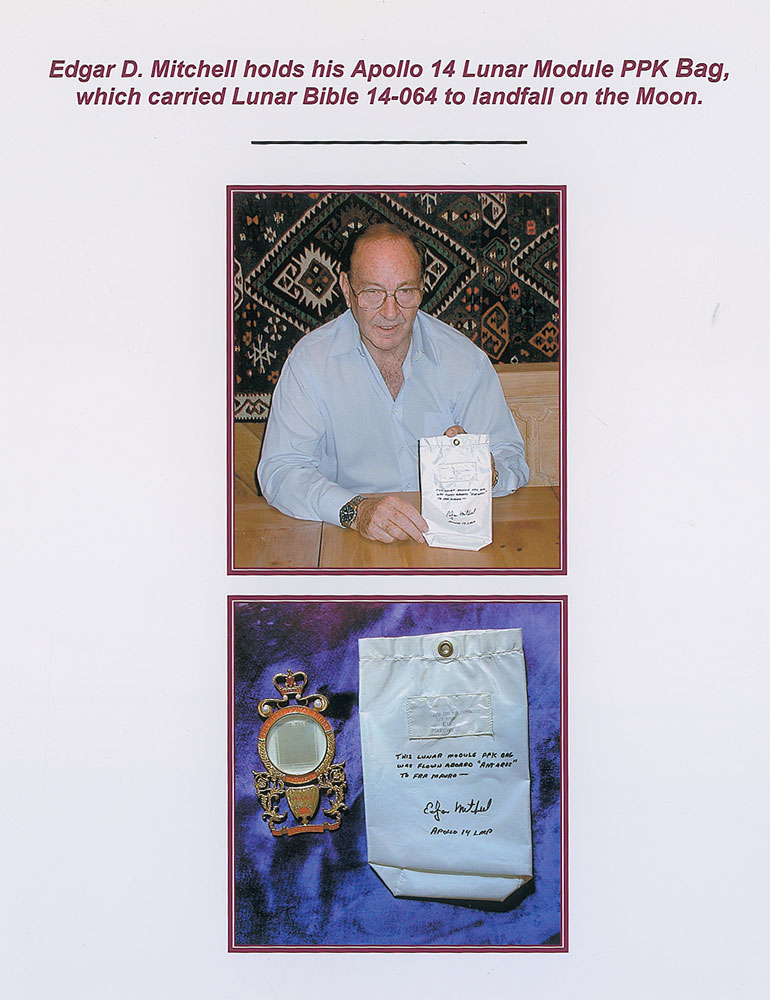 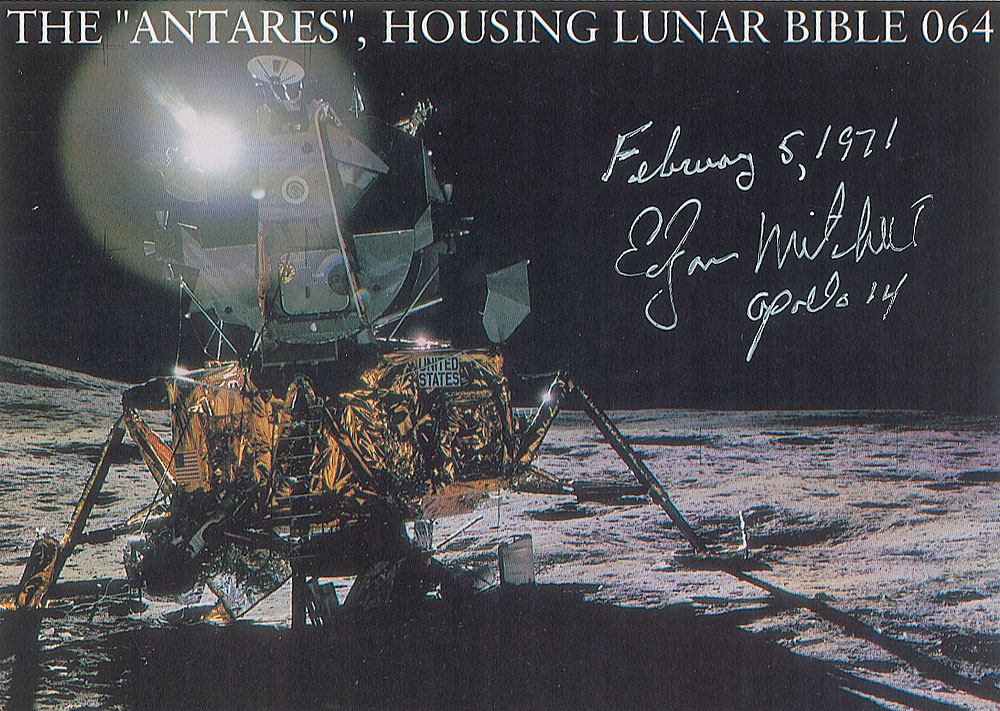 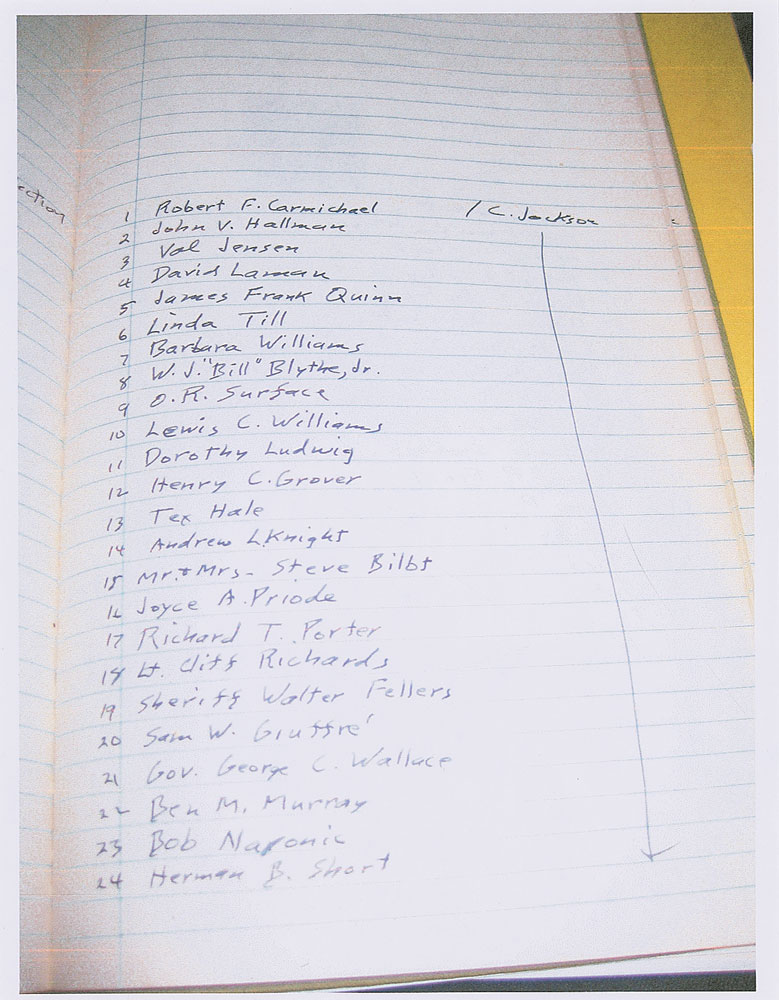 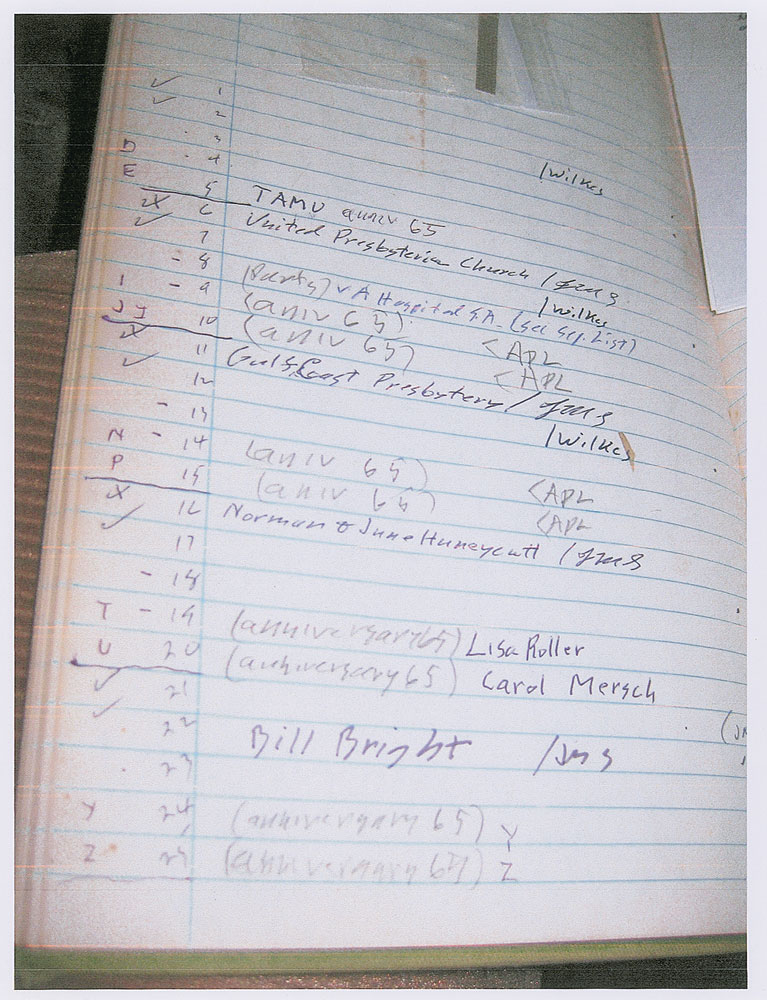 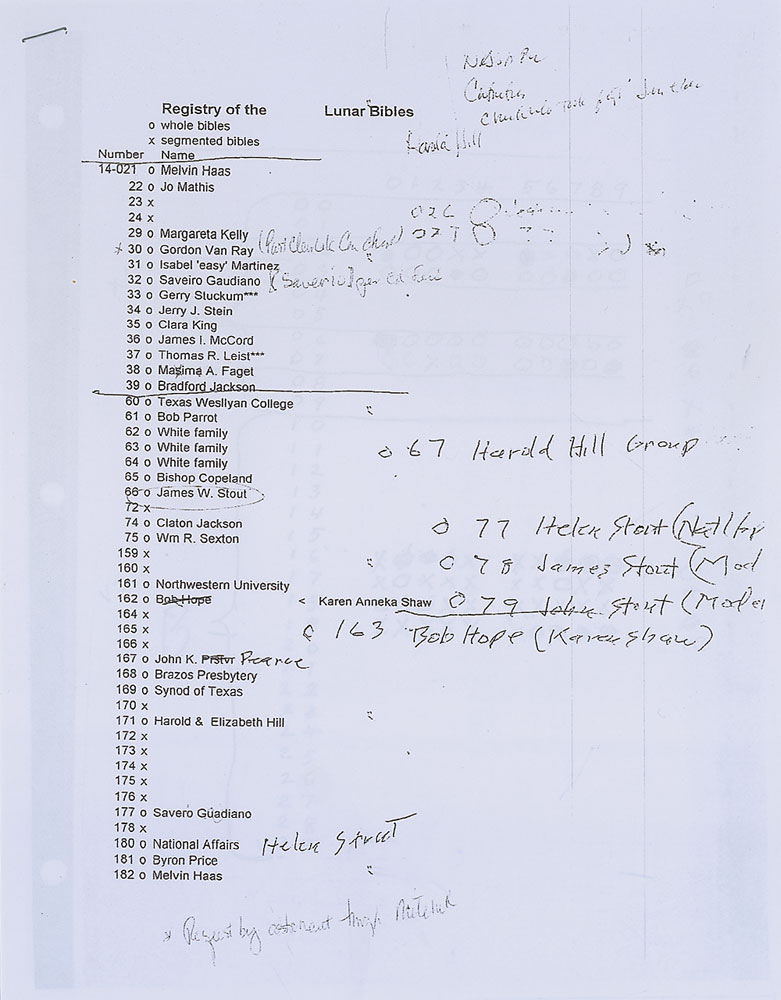 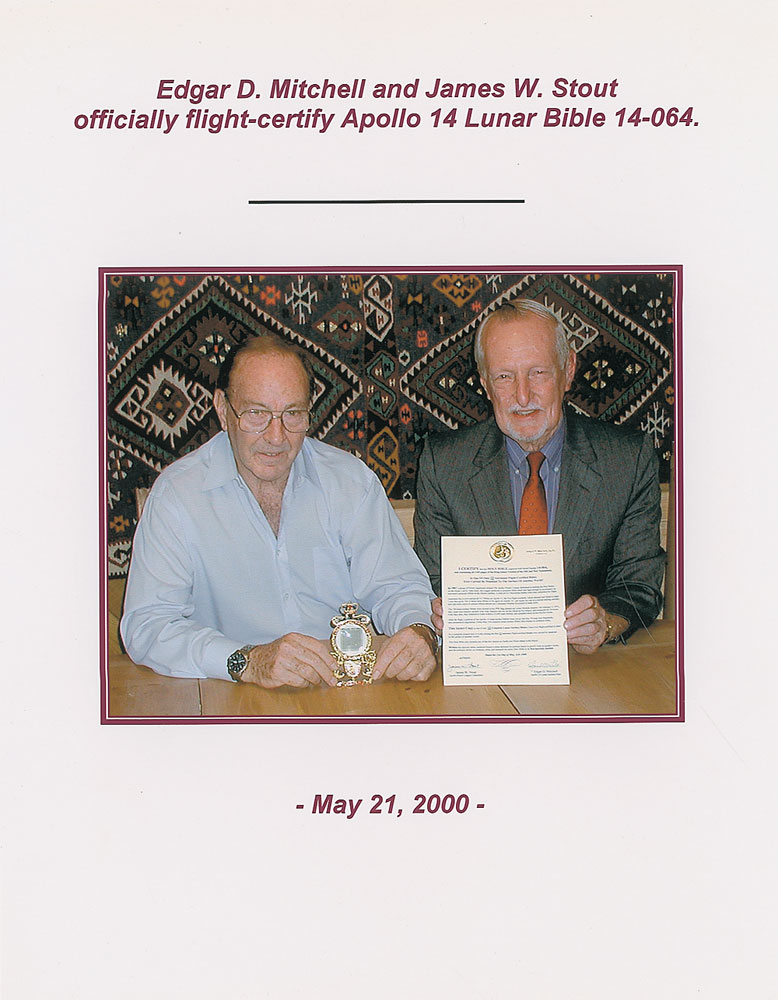 The only complete set of flown lunar bibles in existence, including an Apollo 14 bible originally presented to the family of astronaut Ed White

A one-of-a-kind offering of the only complete set of flown microfilm lunar bibles, carried on board the Apollo 12, 13, and 14 missions. Unique in its own right, this collection is made even more special for several reasons: only one single bible was carried on the Apollo 12 mission (as mentioned by Alan Bean in a 1984 article in the Smithsonian Air and Space magazine), an Apollo 13 bible destined for the lunar surface and returned to Earth after its harrowing mission, and the Apollo 14 bible, carried by Edgar Mitchell to the lunar surface, and later presented directly to the family of astronaut Edward White after its return to earth, and fully documented by Apollo Prayer League founder John Stout. Only one such collection can and does exist, with the following representing the only opportunity to own a complete set of full lunar bibles. The collection consists of:

The only flown microfilm King James Bible carried on Apollo 12, 1.5 x 1.75, containing all 1245 pages of King James Version of the Bible, carried to lunar orbit on board the Command Module Yankee Clipper during the mission. This bible was originally destined to visit the lunar surface, but a mistake on the lunar landing checklist resulted in the bible orbiting the moon in the Command Module. Bible is housed in a beautiful jewel-encrusted gold display utilizing nearly 12 troy ounces of solid 22K red gold, and set with a large ruby and pearls, with “The Apollo Prayer League / Apollo 12, A. D. 1969,” in raised relief at the top and bottom of display, and bearing an engraved number “A-12,” on the front. Bible is accompanied by a letter of authenticity from Apollo 12 Lunar Module Pilot Alan Bean, which reads, in part: “This is to certify that the accompanying Microfilm Holy Bible, bearing a gold plate engraved “A-12” was carried by me aboard the Apollo 12 Command Module ‘Yankee Clipper’ to the Moon…This Bible made its historic voyage with me stowed within my personal Command Module PPK bag, and as such is officially recorded on my ‘Command Module PPK Manifest List.’ This Holy Bible represents the one and only Bible which I carried to the Moon on Apollo 12…The accompanying Holy Bible was then returned to me by NASA from lunar quarantine, and remained a treasured part of my personal space collection from 1969 through 2004.”

A flown complete microfilm King James Bible, 1.5 x 1.5, carried to the moon on board Apollo 13. The microfilm is affixed to its original 8 x 10 presentation sheet of NASA stationery, labelled “Aerospace Ministries No. 13-008.” A typed presentation below reads, “This Bible was flown to the moon April 11-17, 1970, on Apollo 13 spacecraft,” and signed by James Lovell, Jack Swigert, and Fred Haise,” and presented to Harold H. Hill, who was a member of the Apollo Prayer League, second in rank to only Stout himself.

An incredibly rare complete microfilm 1245-page version of the King James Bible, 1.5 x 1.5, carried to the lunar surface by Apollo 14 Lunar Module Pilot Edgar Mitchell, and later presented to the family of Apollo 1 astronaut Edward H. White II.  This Bible first flew around the Moon on Apollo 13, but due to a near-catastrophic explosion the Bibles did not land and instead returned to Earth. This Bible was then flown back to the Moon a second time aboard Apollo 14, where it landed housed within astronaut Edgar Mitchell's Lunar Module "PPK" Bag (included in this lot) on February 5, 1971. The bibles were then given to Apollo 14 Lunar Module Pilot Edgar Mitchell who stowed the Bibles in his PPK bag and landed them safely on the moon February 5, 1971, on board lunar module Antares. Bible is beautifully presented in an eye-catching riby, pearl and gold display using 6.6 troy ounces of 22K gold , engraved “The First Lunar Bible, A. D. 1971,” and numbered, “14–064.” Accompanied by a signed certificate of provenance from Mitchell and James W. Stout, which reads, in part: “Astronaut Jim Lovell carried all 512 Bibles on Apollo 13…which aborted and failed to land. I was then given 300 of those same Bibles to fly again on Apollo 14: 100 copies for use in a second landing attempt…The 100 lunar-surface Bibles were stowed in my PPK Bag on board our Lunar Module Antares. On February 5, 1971, they made their historic landfall with Alan Shepard and me on the Moon at Fra Mauro, and remained for 34 hours…After the flight, a portion of the Apollo 14 lunar–surface Bibles were cut–up into tiny 50 page fragments, and presented to dignitaries. Fewer then [sic] 100 complete lunar–surface Bibles thus remain in existence today. This intact copy is one of only 12 Complete Lunar–Surface Bibles I have ever flight–certified to date! As a complete printed text, it is also among the first 12 astronaut flight–certified books ever carried by mankind to the surface of another world.” The bible display, letter, and a second informational sheet, which incorporates two photos of Mitchell and Stout are all housed in a custom handmade leather clamshell case.

Also included with this Apollo 14 bible is Mitchell’s flown PPK kit, 5.75 x 9.5, with a 3 x 2 label sewn to one side, serial number 1009, with Mitchell’s name printed at the bottom. Signed on one side in black felt tip, “This lunar module PPK bag was flown aboard ‘Antares’ to Fra Mauro—Edgar Mitchell, Apollo 14 LMP,” and signed on the other side, “Contents: Personal effects, lunar bible. Edgar Mitchell,” and accompanied by signed certification from Mitchell. Five other earlier certificates of authenticity for the bible signed by Mitchell are also included, which document the evolution of the certification.

Additionally a flown 1 x 1.5 flown microfilm “Honor Roll,” which contains the names of the individuals and organizations that made the bibles possible, is also included. This Honor Roll accompanied the 100 bibles Mitchell carried to the lunar surface, and is accompanied by a certificate of authenticity from Mitchell stating this particular honor roll was also presented to the family of Edward White, and later owned by John Stout.

Another microfilm bible is also included, this one bordered in gold-leaf and taped inside a United Bible Societies presentation folder, with a small description printed on the front cover stating, “This is the first book taken from Planet Earth to the surface of another celestial body,” although it’s actual flight-status is unknown.

Three bound volumes of provenance and background information are present, which trace the history of the bibles, documentation of their certifications, photographs, and other pertinent information relative to their presentations. Among the paperwork included is:

—a 2002 letter which states, “Lunar Bible 14-064 was originally acquired…from the estate of Gemini IV astronaut Ed White in 1999…The Bible…is the actual copy of the First Lunar Bible that ultimately found it’s way into Ed White II’s family. It was presented to Ed White II’s widow, Pat White, by Reverend John Stout circa 1972.”

—multiple copies of letters, articles, newsletters, and memos from Stout regarding the Apollo Prayer League, the bibles, and other correspondence about the League

—two signed photos of Mitchell, one of the Antares on the lunar surface, and one of Mitchell returning the microfilm package to John Stout

—newspaper clippings, articles, and photos relating to the bibles carried into space

—other correspondence concerning the issuing of the bibles and much, much more


After the fire that claimed the lives of Ed White, Gus Grissom, and Roger Chaffee, Reverend John Stout established the Apollo Prayer League, whose main purpose was to pray for the safety of the astronauts. Soon after, membership in the league swelled to over 40,000 NASA employees, and efforts were begun on the Lunar Bible Project. Despite the failed efforts of getting the bibles to the moon on the Apollo 12 and 13 missions, the league’s dreams were finally realized when Apollo 14 brought 300 bibles to the moon, including the 100 carried on the surface by Mitchell. This collection represents the only set of complete flown lunar bibles assembled, with extensive and irrefutable provenance and documentation, and such deep personal association of the Apollo 14 bible and the family of Ed White, for whom the Apollo Prayer League was originally established. The uniqueness of this collection cannot be overstated, and represents a once-in-a-generation opportunity to acquire the only collection of these bibles available. RR Auction COA.