A poem for his masterful friend Voltaire: "Might it be that verses flow from you like prose?" 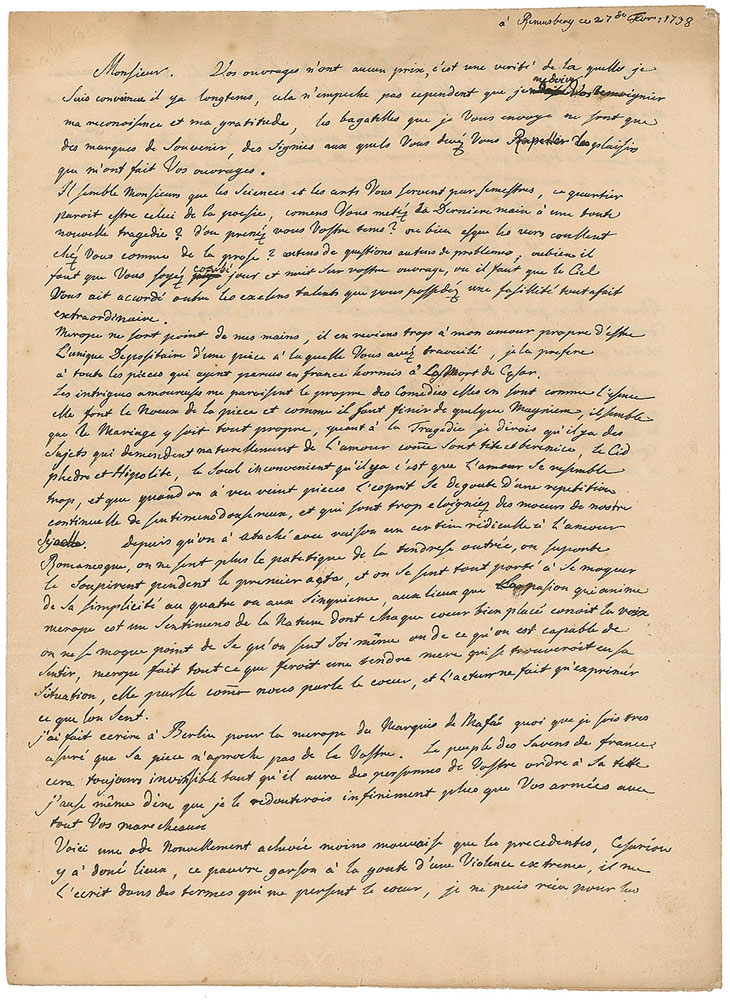 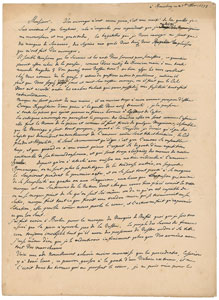 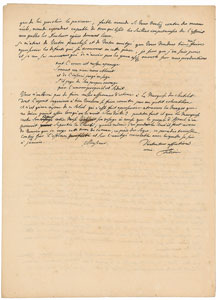 A poem for his masterful friend Voltaire: "Might it be that verses flow from you like prose?"

King of Prussia (born 1712) from 1740 until his death in 1786. His political prowess and enlightened attitudes toward religion, learning, and the humanities earned him the sobriquet 'Frederick the Great.' Outstanding ALS in French, signed "Frederic," one page both sides, 7.5 x 10, February 27, 1738. Frederic the Great writes to Voltaire, in part (translated): "Your works are priceless. For some time I've been convinced of that truth, but that doesn't keep me from my obligation to express my recognition and gratitude to you. The little trifles I send you are merely tokens of remembrance, signs for you to recall the pleasures which your works have given me. It seems Sir that the Sciences and the Arts are at your service on a quarterly basis. This quarter seems to belong to poetry. How is it that you are putting the finishing touches to an entirely new tragedy? Where do you find the time? Or might it be that verses flow from you like prose? So many questions so many problems; Or might it be that you are immersed in your Work night and day or it must be that Heaven has granted you an entirely extraordinary facility, in addition to the excellent talents you possess. Your 'Merope' is never out of my hands. It redounds too much to my self-esteem to be the sole custodian of a piece on which you have worked. I prefer it to all your pieces that have appeared in France with the exception of 'The Death of Caesar.'

Amorous intrigues seem to me to be the essential element of Comedy...As for Tragedy I would say there are subjects which naturally require love such as Titus and Berenice, le Cid, Phedre and Hippolytus. The only problem is that love too much resembles itself and after one has seen 20 pieces, the mind finds the endless repetition of syrupy sweet feelings distasteful, feelings that are too far removed from the customs of our century. Ever since love in romantic novels has been justly associated with a certain foolishness, one no longer feels the emotional impact of excessive tenderness...the lover pining away in the first act...we find ourselves inclined to make fun of him in the 4th or 5th act...the passion which animates Merope is a natural feeling whose voice is recognized by everyone whose heart is in the right place. One does not at all mock what one feels oneself or what one is capable of feeling.

Merope does everything a tender mother would do if she were in her position, she speaks as we do, speaks to the heart, and the actor merely express what we are feeling. I've written to Berlin for the Marquis de Maffei's 'Merope' although I am very certain that his piece won't come near yours. The scholarly people of France will always be invincible as long as there are persons of your kind at their head, I even dare to say that I would be infinitely more afraid of them than of your armies with all your Marshals. Here is a newly finished Ode, less bad than the preceding ones. Cesarion [Frederick's pet name for Dietrich Count von Keyserlingk, widely believed to be his lover] inspired it. That poor boy has an extremely violent case of the gout. He writes me about it in terms that pierce my heart and I can do nothing for him except counsel patience—a feeble remedy against real maladies, but nevertheless a remedy capable of calming impetuous flashes of the mind created by intense pains.

I expect that you, in your frankness and your friendship, will be kind enough to inform me of the defects...in the piece. I sense that I'm proud of it and I'm not pleased that my eyes aren't sufficiently open concerning my own work. [Here Frederick pens a poem] Error is so much a part of us, often a trifle blinds us. Whether fool or wise man, when he judges his own work he's seduced by his own vanity. You won't forget to bestow a thousand assurances of my esteem on the Marquise [Emilie] du Chatelet [highly respected mathematician, physicist, author, and Voltaire's longtime companion] whose brilliant mind has made itself known by a small sample. It is just a ray of that sun that was seen between the clouds and that can't be seen except through a veil. Perhaps it will be necessary for the Marquise to hide her brilliance as did Moses when he hid his face because the people of Israel couldn't bear his brilliant light; nevertheless I will venture to take on the sight of that brilliance; before dying I must see the land of Canaan, that country of Wise Men, that Earthly Paradise." Intersecting folds, some mild toning along top edge, and some light wrinkling, otherwise fine condition.

Engrossed with the French Enlightenment in the mid-1730s, Crown Prince Frederick began a now-famous correspondence with Voltaire that would last nearly half a century. For the first four years, leading up to Frederick's crowning, the two indulged their mutual intellectual fascinations with one another, prodigiously writing and enclosing their latest poems, philosophies, and reviews, amidst glowing praise. This letter, written two years into their friendship, captures the intensity of their early relationship. Complimenting Voltaire's prolific work and range—"This quarter seems to belong to poetry. How is it that you are putting the finishing touches to an entirely new tragedy?...Or might it be that verses flow from you like prose?"—Frederick offers his scholarly opinion on the place of romance in different genres of drama, using Voltaire's recent reinterpretation of the Francesco Maffei drama 'Merope' as the example of the perfect use. Sharing a new ode of his own, he encourages Voltaire to send his opinion of the work, remarking that though he is proud of it, "my eyes aren't sufficiently open concerning my own work." His closing comments referring to Emilie du Chatelet's 1737 paper 'Dissertation on the Nature and Propagation of Fire,' are especially interesting, offering glowing praise of her genius—quite opposite the harsh opinions he expressed in private, fueled by his jealousy of the attention that Voltaire bestowed upon her. While the two lived together at Cirey, her chateau in Lorraine, Frederick sent 'Cesarion' there to obtain copies of all Voltaire's works. A fascinating letter revealing the spark of this famous friendship between two of 18th-century Europe's most influential men.