Remarkable collection of letters from the Desert Fox, including several war-dated, with excellent content from the months leading up to D-Day 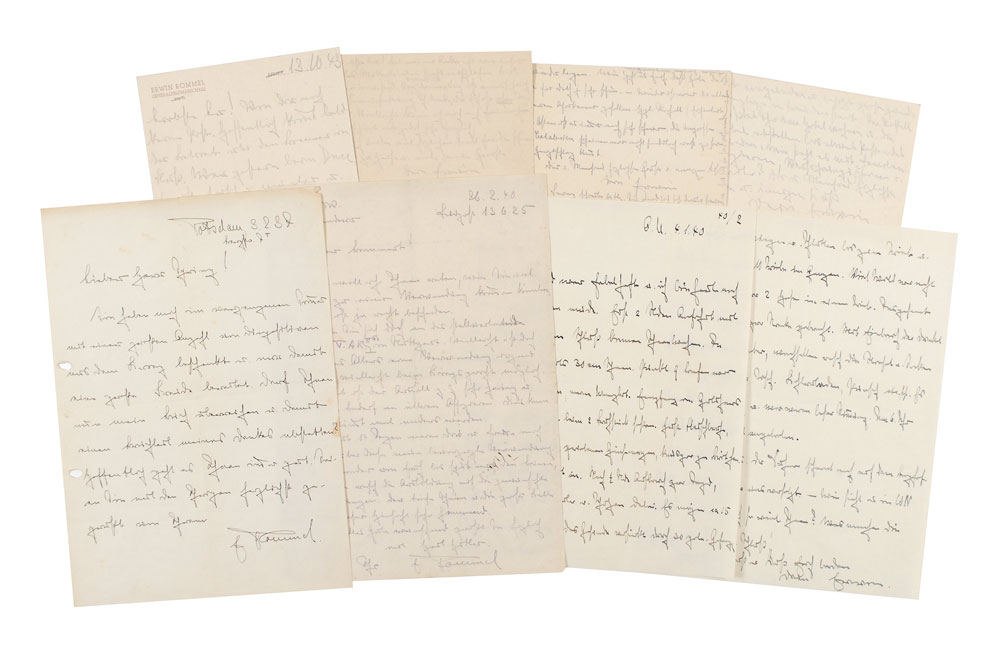 Remarkable collection of letters from the Desert Fox, including several war-dated, with excellent content from the months leading up to D-Day

An impressive collection of 7 ALSs in German, most written in pencil, ranging in date from February 3, 1937, to October 13, 1943, (all war-dated except the first), including five to his wife. A translated selection from his letters is as follows:

February 3, 1937, one page, to “Herr Spring,” signed “E. Rommel.” Rommel sends thanks for a sent gift, “which made me very happy. May I surprise you with my letter and thereby render a fraction of my thanks?”

January 4, 1940, two pages, to his wife, signed “Your Erwin.” “The hunt yesterday was fabulous. I am still tired in a good sort of way. First we drove by car for about two hours, and then we had nothing but snow. We arrived punctually at 9:00 AM. Reception was at the Golden Pheasant where numerous guests were having their second breakfast: deer’s breast, goose breast, goose fat, minced goose stomach and crisp rolls. The event started in a nice way. After half an hour the hunt began, assisted by the sons and daughters as game flushers and hunters, There were about 15 hunters. The domestics, reinforced by 30 Polish prisoners, flushed the game. We rode cars and sleds. There were a total of ten drives, but there was not much game. Sometimes only two hares in a drive. There was a total bag of 39 hares. As darkness set in we returned and quickly changed our boots and socks. Then we had dinner. Stuffed cabbage, punch etc. It tasted great and we were in the best of moods. At 6:00 PM we started the return trip. No news here. The Fuehrer is apparently still at the Berghof. Dietl will probably be transferred to our troops. How does Wiener Neustadt look? Still have lost of snow? That’s it for now.” Just months before the German invasion of France, during which he would distinguish himself as the commander of the 7th Panzer Division, Rommel enjoyed a quiet period in the war, indulging his passion for hunting while Hitler stayed at his Berghof mountain villa.

February 26, 1940, one page, to “Brommert,” and signed “E. Rommel”: “I will advise you to get a new job, because your pension is not very high. I would advise you to call on General 5., Arcade 2A in Stuttgart. Maybe this will be an opportunity for you, in spite of your age. If this proves unsatisfactory maybe you should try the War Court. On the front we are losing few people at the present time; therefore there is no use for older officers. Maybe this situation will change sooner or later. I have been a Commander of a Division since about two weeks ago, and I am very happy about this new job. I am busy from the early morning to the late evening—in order to bring my division to the highest standards possible. It was a big disadvantage to us that we have had a lot of snow and cold weather. I wish good success to you.”

November 3, 1940, on a postcard, addressed in Rommel’s hand, to Lucie, signed “Your Erwin.” “At my arrival, our beloved mother just quietly slept away. Karl was present. The cremation will probably take place on Thursday. I think you should come without Manfred. Eventually, I shall try to get a leave but it looks doubtful. To both of you, many thanks for your regards.”

September 7, 1943, one page, both sides, to his wife, signed “Your Erwin.” “I well survived the aerial attack last night in the bunker of our settlement. Gunther managed to warn us in time. Otherwise, I would have overslept. I currently have an upset stomach. It will probably pass. How are you doing? It is very nice for you that Grete is there. Once again, one of the old faithful Africans [Afrika Corps members] has fallen. Captain Rochell. It’s probably very bad in the East as well. The attacks in Calabria don’t seem all that serious to me. The main strike is coming.” Shortly after giving up the disastrous campaigns in North Africa, Rommel was sent to northern Italy to prepare a line of defense against a possible British invasion. Headquartered in Lake Garda as commander of the newly formed Army Group B, he ignored a number of smaller attacks, correctly assuming that they were diversions from “the main strike” that would land in Normandy a few months later.

September 19, 1943, one page, both sides, to Lucie, signed “Erwin,” written just three days after his appendectomy and while hospitalized. He sends thanks for two letters, expresses his happiness she has moved, and asks her to contact a friend if in Freudenfuert. “He has visited us often. He owns big buildings in Freudenfuert. In an emergency, you must live in a hotel and put the furniture in storage until you find something suitable.” He also lets her know his is “allright.”

October 13, 1943, one page, both sides, to his wife, signed “Erwin.” “No mail from you yet. Hope things will get moving over the summer. Was with Duce yesterday. He is fresh, cheerful, and has great plans.” Following Mussolini’s removal from power, the new Italian government immediately began negotiations with the Allies. Stationed in Lake Garda for one more month before heading to the coast of France, Rommel wrote this letter the same day that Italy officially declared war on its former Axis partner.

In overall fine condition. A more comprehensive description is available online at rrauction.com, along with translations for all of the letters. Copies of the letters in German are available upon request. RR Auction COA.