Force’s scarce and striking reproduction of the Declaration, handsomely displayed 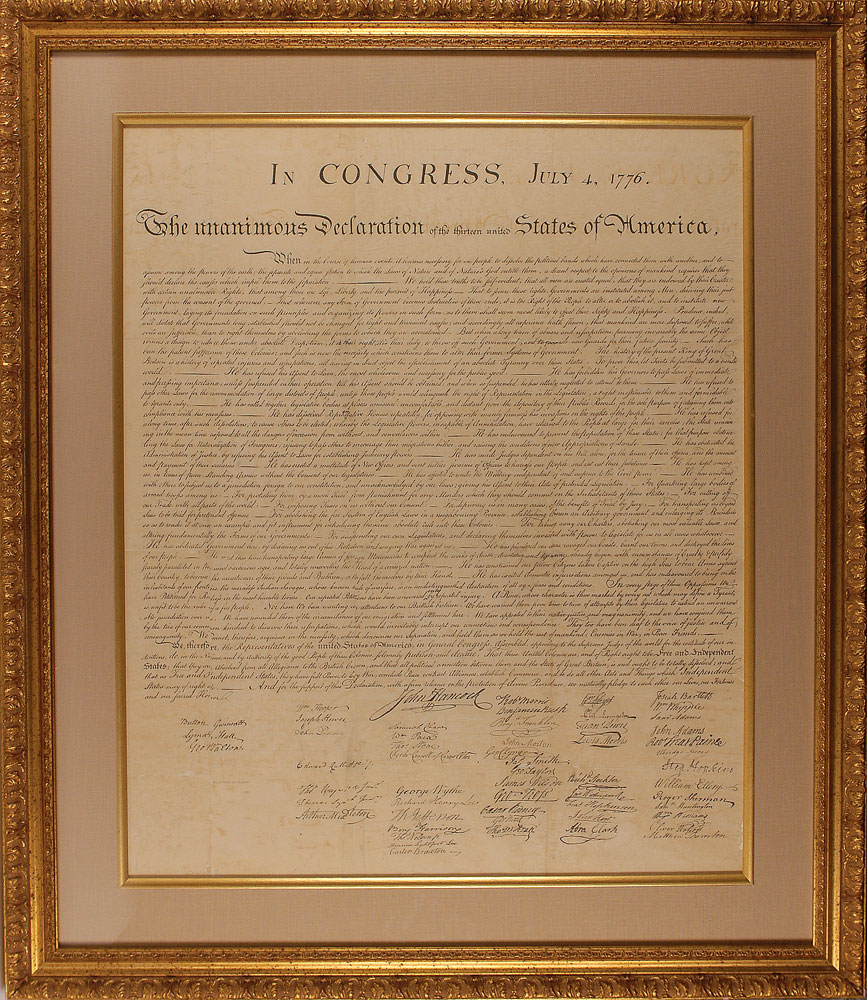 Force’s scarce and striking reproduction of the Declaration, handsomely displayed

Scarce engraved broadside, “In Congress, July 4, 1776. The Unanimous Declaration of the Thirteen United States of America. When in the Course of Human Events.” [Washington, DC,] engraved by W.J. Stone, and reprinted in 1833 from the same copperplate for Peter Force’s multi-volume work, American Archives (1837–1853).

By 1820, the original Declaration of Independence, had seriously deteriorated due to inappropriate handling and storage. In an effort to preserve the memory of the venerable document, Secretary of State John Quincy Adams commissioned William J. Stone to engrave an exact facsimile on a copper plate. When Stone completed his painstaking work in 1823, Congress ordered 200 official copies printed on vellum. Stone’s original engraved plate remained with the Department of State.

Several years later, Peter Force, historian, publisher and mayor of Washington DC (1790–1868), conceived a 20-volume anthology entitled American Archives, which would reprint letters, documents and broadsides from the American Revolution and convinced Congress to fund an edition of 1,500 sets. For the project, Force arranged with the State Department to print 4,000 copies of the Declaration using Stone’s original copperplate. Stone’s imprint was neatly burnished out at the top of the plate—and “W.J. STONE SC[ULPSIT] WASHN.” was placed in the lower left. The facsimiles were folded and bound into volume one of the fifth series of American Archives: A Documentary History of the United States of America.

Recently uncovered documentation demonstrates that Force’s edition was not printed in 1848 as previously believed, but earlier, in 1833. American Archives was published at intervals between 1837 and 1853, but paid subscriptions to the elaborate (and bulky) collection proved disappointing. In 1843, when Force received Congressional re-authorization to continue the work, he had scaled back his subscription plan to 500 copies. In the end, only 9 of the projected 20 volumes were ever issued.

Although Force printed over 4,000 copies, extant editions of his facsimile are surprisingly scarce. The Force printing, the second edition of the first exact facsimile, remains one of the best representations of the Declaration as the manuscript looked over 150 years ago, before the document’s near complete deterioration today.

Beautifully cloth-matted and framed, and possibly mounted, to an overall size of 34 x 39.5. In overall very good condition, with intersecting storage folds, well-done professional repairs to separations along folds, repaired areas of small paper loss, with well-done touch ups to the text in those areas, and other separations, light mirroring and ink transfer to print, and some scattered light toning. A visually-striking example of one of only a few hundred printings known to exist. Oversized. RR Auction COA.