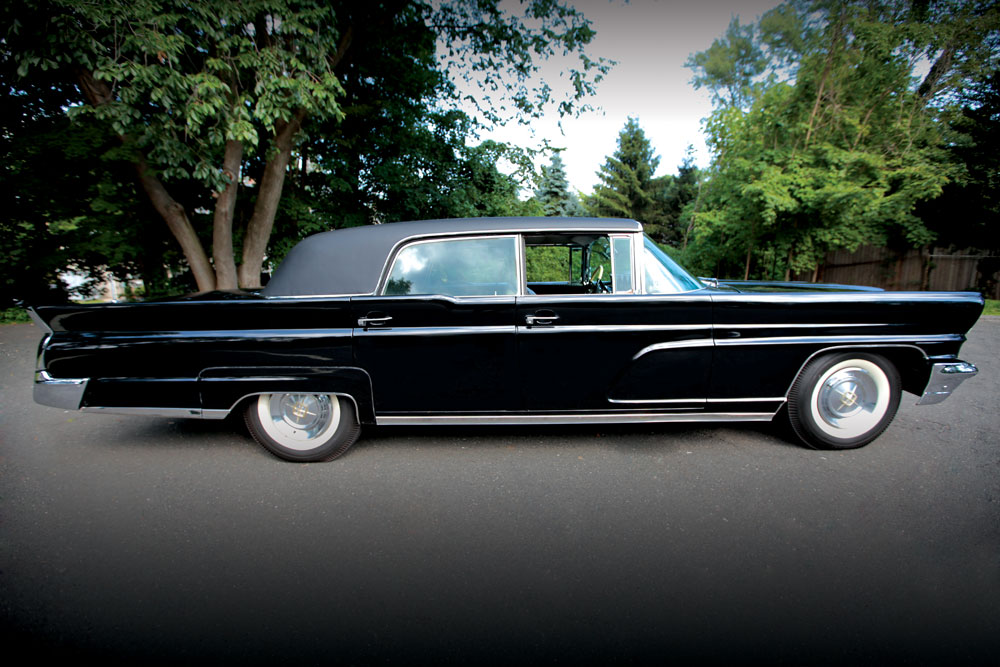 A black 1960 Continental Mark V 6 passenger Limo converted for Lincoln by Hess and Eisenhardt of Cincinnati, Ohio. from the Kennedy White House motor pool. This four-door bulletproof limo features a divider window, passenger air controls, power steering and brakes, and a very uncommon two-way telephone in the back seat. Much of the body has been restored, to the tune of approximately $35,000, however, the interior remains in its original condition, with beige leather seats, matching carpeting, and the aforementioned telephone. Leased to the White House for $500 a year from Ford, the limo was used for the president’s personal needs in Washington, DC, then returned the public market through secondary dealerships, where it was purchased in March of 1964 by Dr. James C. Walsh.

After Dave Powers declined Walsh’s offer to include the limo in the Kennedy Library due to space constraints, it was donated to Kirkland Hall College in Easton, Maryland. A letter to the institution’s president provides additional background information regarding the car, in part: “I spoke to Mr. Campbell Schmidt Jr….an official of the Washington office of the Ford Motor Company. He told me that President Johnson had switched all the White House cars…As a result the Ford Motor Company was going to sell this car and at my wife, Mary’s, insistence I purchased it on the spot.…The late president who had been exceptionally gracious to our son…who had attended the White House school…It is because of this association that I had the opportunity to meet the late president and to know in fact that he did use this car for his own personal uses in contrast to the official use of the larger White House limousine.”

The limo was later sold in a fundraising auction by the college to George W. De Franceaux, who leased it to the Allstate Exhibit Company for a lengthy exhibition “of the John F. Kennedy automobile.” It was then displayed at the Museum of American Tragedy in St. Augustine, Florida, until the museum’s owner passed away in 1998, at which time it was sold at auction. A classic, show-worthy car with excellent association to the president. RR Auction COA. Additional images may be view or downloaded as a PDF by clicking here (opens in new windows).