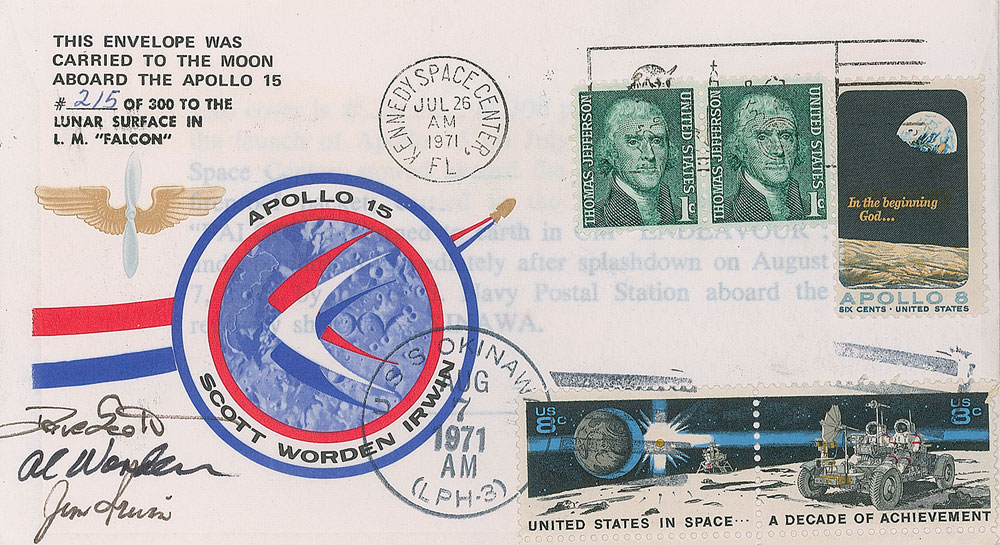 Uncommon Apollo 15 postal cover, 6.5 x 3.75, numbered 215 of 300, carried to the lunar surface aboard the Falcon, signed in the lower left corner by crew members Dave Scott, Al Worden, and Jim Irwin. In fine condition. This particular cover comes from astronaut Dave Scott’s personal collection. Accompanied by a one-page typed notarized certification, signed “Alfred M. Worden,” “David R. Scott,” and “James B. Irwin.” The provenance reads in part: “Postal covers were carried aboard the Apollo 15 Mission, which postal covers were stamped and postmarked at Kennedy Space Center, Florida, on the date of the launch, July 26, 1971, and carried aboard the Apollo 15 Spacecraft during the entire term of the Mission, to include landing on the moon and were returned to the Earth at the termination of the Mission on August 7, 1971…The postal covers were in the possession of one or more of the undersigned until 1972, at which time they were deposited with the United States Government…The undersigned have this date inspected Postal Cover No. 176, bearing NASA Serial No. 223, and aver, affirm and certify that said Postal Cover is a cover which was carried aboard the United States Lunar Mission—Apollo 15.” All three crew members have also added their initials to a small correction in the text. Also included is a two-page letter of authenticity signed by Dave Scott, which reads, in part: “I hereby certify that the postal cover No. 215 included with this letter was carried to the lunar surface aboard the Lunar Module Falcon.” Scott goes on to recall the history of these covers and their eventual return to the Apollo 15 crew. In fine condition.

As was common practice on Apollo missions, postal covers and medallions were carried aboard the spacecraft as mementoes. Because of the increased mass of equipment to be carried by the Apollo 15 lunar module (including the Lunar Rover), the number of medallions was halved and 400 postal covers were carried instead. The covers were provided by a German stamp dealer, who would retain 100 (not to be sold on the open market), and 300 would be divided among the crew (a fee was also offered, but eventually declined). Several months after the mission, the German stamp dealer advertised his 100 covers for sale. When the situation came to NASA's attention, NASA impounded all of the crew’s covers, which were then deposited in the National Archives. In February 1983, the crew brought legal action against NASA for return of the covers. A settlement was reached quickly and on July 19, 1983, NASA returned the covers to the crew in a private meeting at the National Archives.

During the settlement, the crew signed a notarized letter of provenance for each cover. The legal document is, of course, specific in its detail, noting that the postal covers “were carried aboard the Apollo 15 Mission…and carried aboard the Apollo 15 Spacecraft during the entire term of the Mission to include…the moon, and were returned to the Earth at the termination of the Mission on August 7, 1971.”

The trail of the offered cover is a piece of space collectible legend, with the provenance that tells the story in great detail! Pre-certified Steve Zarelli and RR Auction COA.