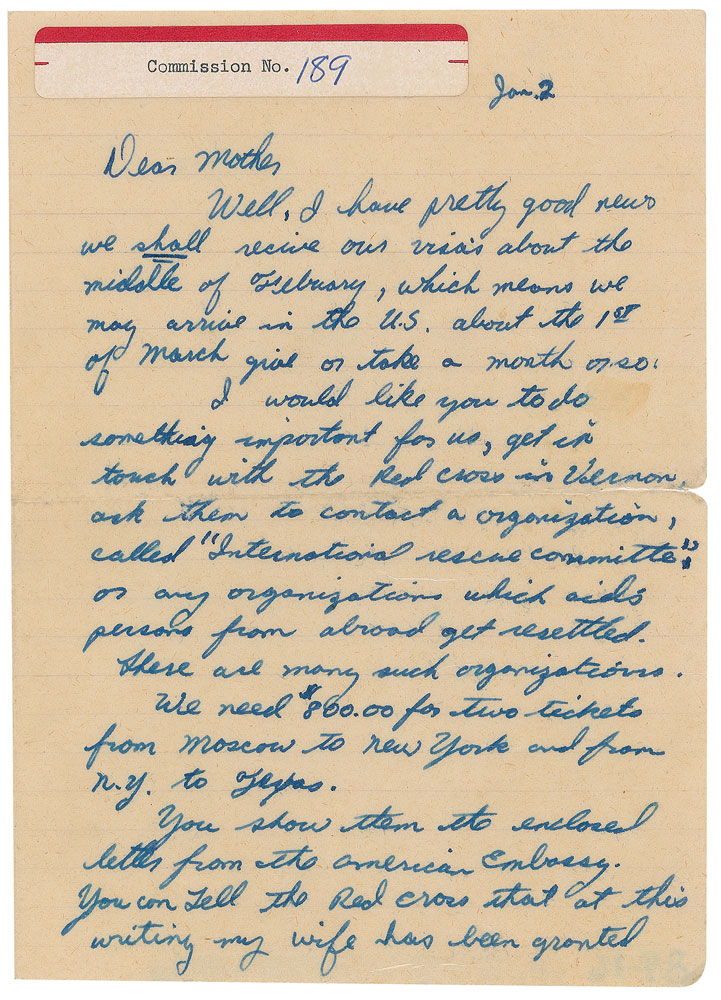 ALS signed “Love Lee,” three pages, lightly-lined on two adjoining sheets, 5.5 x 7.75, January 2, [1962]. Letter to his mother. In full (with grammar and spelling retained): “Well, I have pretty good news we shall recive our visa’s about the middle of Febuary, which means we may arrive in the U.S. about the 1st of March give or take a month or so. I would like you to do something important fir us, get in touch with the Red Cross in Vernon, ask them to contact a organization, called ‘International rescue committe,’ or any organization which aid's persons from abroad get resettled. There are many such organizations. We need $800.00 for two tickets from Moscow to New York and from N.Y. to Texas.

You show them the enclosed letter from the American Embassy [photocopy of the letter, Warren Commission Exhibit No. 241, is included]. You can tell the Red Cross that at this writing my wife has been granted non-quoto immigration stutus for entrance into the United States, and that both of us have now recivied Soviet exit visa’s to leave the Soviet Union. These visa’s will be good until about the middle of april. Tell them all outstanding documentation has already been resolved. We only need the money for the tickets now.

Ask them to contact the American Embassy, Moscow for information and if they send money, to send it; c/o U.S. Embassy, Moscow U.S.S.R. I want you to try to get the money through some organization, and not try to collect it yourself, alone. Do not, of course, take any loan only a gift. and don’t send your own money. A lot of such organizations exist which help people in our case, so it won’t do any harm to take a try. We recivied you Christmas card with Photo’s they were very good, both of us enjoyed them very much. Write Soon.” In fine condition, with a thin mounting strip on top of lamination on second page. This letter was an official exhibit (No. 189) in the Warren Commission investigation into JFK’s assassination and, like most of the exhibits, is protectively and permanently soft-laminated. Pre-certified John Reznikoff/PSA/DNA and RR Auction COA.