Awaiting visas to return to America, Oswald writes from Russia, “On Nov. 7-8 the big revolution day holidays will come off. They’ll be a lot of red flag waving and firworks like on the 4th of July in the States” 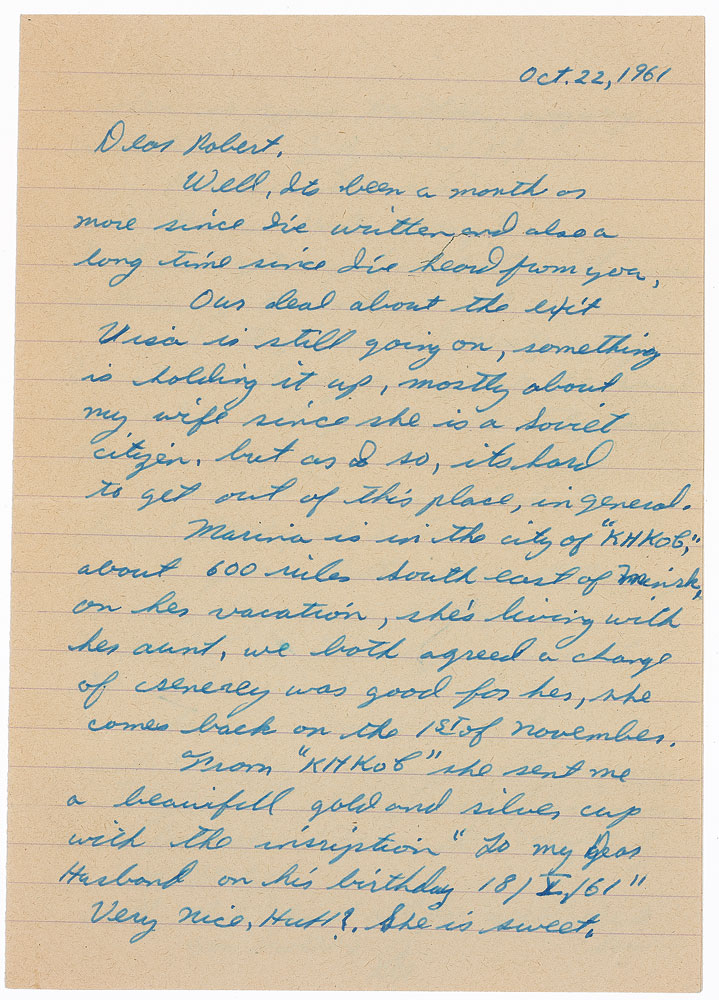 Awaiting visas to return to America, Oswald writes from Russia, “On Nov. 7-8 the big revolution day holidays will come off. They’ll be a lot of red flag waving and firworks like on the 4th of July in the States”

ALS signed “Your brother, Lee,” two pages, lightly-lined, 5.5 x 8, October 22, 1961. Letter to his brother Robert. In full (with grammar and spelling retained): “Well, Its been a month or more since I’ve written and also a long time since I’ve heard from you. Our deal about the exit Visa is still going on, something is holding it up, mostly about my wife since she is a Soviet citizen, but as I so [said], its hard to get out of this place, in general. Marina is in the city of ‘KHKob,’ [Kharkov] about 600 miles South east of Minsk, on her vacation, she’s living with her aunt, we both agreed a change of senerey was good for her, she comes back on the 1st of November.

From ‘KHKob’ she sent me a beauifill gold and silver cup with the insription ‘To my Dear Husband on his birthday 18/V,/61’ Very Nice, HuH? She is sweet. When is your birthday anyway sometime in July isn’t it? How is Vada doing? Did you get my last letter with some pictures of Minsk in it? I think around New Years, if I’m still unlucky enough to be around here, I’ll call you on the telephone O.K.?

Hows the hunting out at the farm? Still good I bet. I got a letter from the Embassy the other day, they are keeping in touch as to developments with the exit visa. Soon, on Nov. 7-8 the big revolution day holidays will come off. They’ll be a lot of red flag waving and firworks like on the 4th of July in the States. Well, that’s about all for now. Write Soon.” In fine condition. This letter was Warren Commission Exhibit 306 and originates from the collection of Dr. John K. Lattimer (1914-2007). Lattimer was a doctor and renowned collector who who did extensive research on the Lincoln and Kennedy assassinations, becoming the first non-affiliated medical specialist, chosen by the Kennedy family, to examine the medical evidence related to the Kennedy assassination.

At the time of writing this letter, Oswald had already spent months struggling to obtain exit visas for himself and his then-pregnant wife from the Soviet government. While there seems to be a slightly optimistic undertone to this message, he would grow increasingly agitated with such difficulties and bureaucratic roadblocks that he would eventually write to Senator John Tower, saying that the Soviet Union was holding him, a citizen of the US, 'against his will and expressed desires.' Also particularly interesting is Oswald's closing comment in which he draws the comparison between holidays celebrating the American and Russian revolutions—a commonality between these otherwise diametrically opposed nations. Pre-certified John Reznikoff/PSA/DNA and RR Auction COA.