The father of Impressionism rings in 1925 with the heavy burden of completing his Nympheas: “I had to ask the Beaux Arts to give me more time” 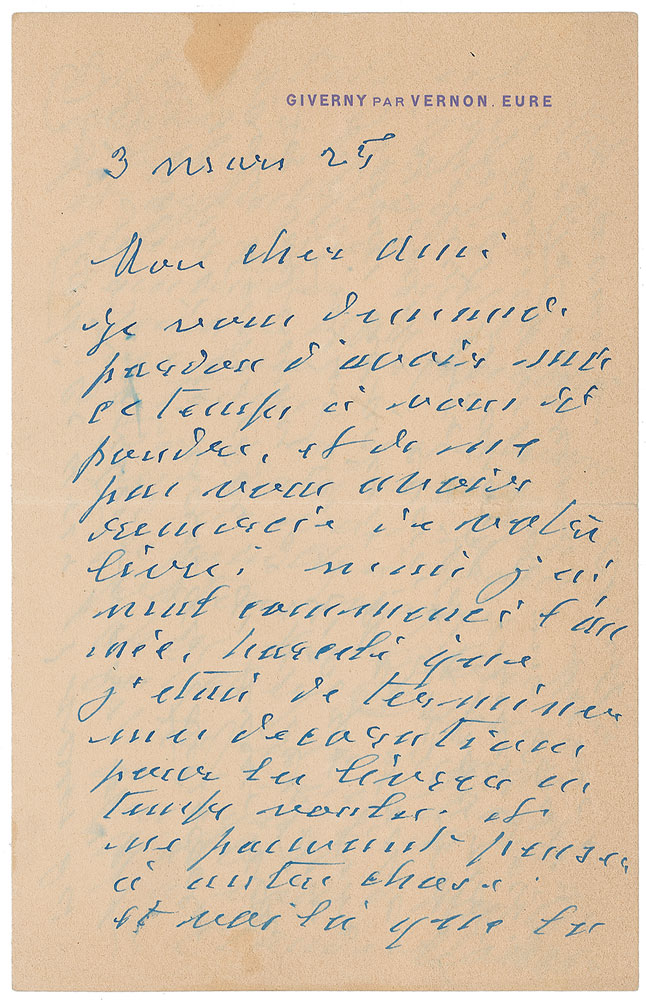 The father of Impressionism rings in 1925 with the heavy burden of completing his Nympheas: “I had to ask the Beaux Arts to give me more time”

ALS in French, signed “Yours in friendship, Claude Monet,” three pages on two adjoining sheets, 5 x 8, March 3, 1925. Letter to writer Jean Ajalbert. In part (translated): “I ask your pardon for having delayed in answering and thanking you for your book; but I started off the New Year badly, harassed as I was to finish my decoration and deliver it at the time required. I couldn’t think of anything else. And behold the fatal date arrived. And because I was all worn out and in need of rest I had to ask the Beaux Arts to give me more time. I see no possibility of lending you what you ask for. Inquire from Bernheim or Durand.” Monet goes on to add a full-page postscript, signed “C. M.,” which reads, “Everything I’ve just told you will stay between us, isn’t that so. And then I…wanted to ask you if you remember that certain little wine [Rosé] des Riceys we drank at Sacha’s [likely Sacha Guitry who filmed Monet at Giverny] house and I think I remember that it wasn’t bad at all…it would be very nice of you to give me the address.” In fine condition, with several small spots over a few words of text, a brush to last name of signature, as well as a couple brushes to a few letters of text.

In the spring of 1922, Monet agreed to donate his Nymphéas (Water Lilies) series to the French government to be housed in redesigned, oval rooms at the Musee de l’Orangerie. After working with the Louvre’s head architect on the plans for the new space—natural light, plain, curved walls, and sparse interior decoration—the artist’s cataracts made it impossible for him to meet the project’s deadline of 1924. Recovering from a surgery that completely changed his vision (removing the reddish tint that had prevailed in his sight, and his paintings, for the last several years), he was forced to push back the delivery of the series. It would not make its way to the museum until after his death in 1926, finally opening to the public in May of 1927. Regretfully declining friend and art critic Jean Ajalbert’s request for a few pieces of work, Monet directs him to “Bernheim or Durand,” of Bernheim-Jeune and Durand-Ruel galleries, the two major handlers of his work, to fulfill his needs. A magnificent letter from Monet’s final year, working through one of his finest and most famous series. Pre-certified John Reznikoff/PSA/DNA and RR Auction COA.

This item is Pre-Certified by PSA DNA Precertified Letter
Buy a third-party letter of authenticity for $125.00