Over 10,000 19th and 20th century images ranging from presidents, authors, musicians, actors, soldiers and much, much more 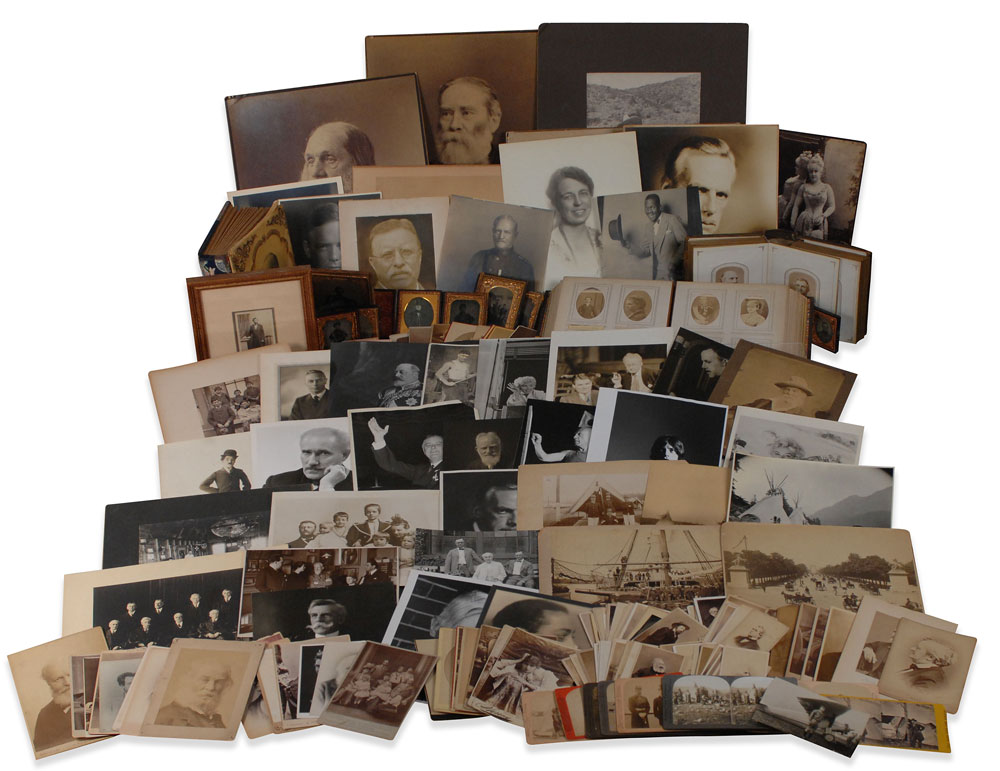 Over 10,000 19th and 20th century images ranging from presidents, authors, musicians, actors, soldiers and much, much more

An enormous lifetime collection of easily over 10,000 + unsigned photographs and images consisting of many different forms of photography including carte-de-visites, cabinet photos, stereoviews, daguerreotypes, and more modern photos. Photographers and studios include Sarony, Brady, Elliott and Fry, C. W. Bell, Pach Brothers, Purdy, London Stereoscopic, and other American and European studios. A very wide range of subjects are included in the collection including presidents, royalty, heads of state, religious figures, authors, luminaries of the stage, composers, musicians, castles and monuments, entertainers and members of the military, primarily the Civil War. While many of the images appear to be of unidentified family members and gatherings, included in the collection are images of:

A selection of stereoviews include U. S. Grant, Theodore Roosevelt, and native Americans. Oversized photos include native Americans, a Brooklyn Bridge commemorative composite photo, the streets of Paris, Civil War soldiers, family gatherings, cityscapes, oil drilling, and railroads. Approximately 125 daguerreotypes of various sizes are also included, most in their original cases, some missing their covers, others having their covers separated. A few vintage scrapbooks and photo albums are also included, one entitled “My China Cruise.”

A camera, two stereoviewers, and several slide and negative viewers are also included, although the working condition of each is unknown. The camera is a Kodak Senior Six-16 (with box), two stereoviewers (one an Underwood and Underwood), and two Tru-View viewers (with approximately 20 slide rolls).

Collection rates in overall very good to fine condition. Due to the enormity of the collection please be advised that extra shipping charges will apply. The sheer overwhelming volume of items precludes a list, and interested parties are strongly advised to view the collection in person at our offices, as this collection is sold as is, and no returns will be accepted. Large collections such as this are seldom offered as a whole, and there are certainly still many discoveries that lie within. A PDF of the collection’s highlights is available by clicking here. RR Auction COA.