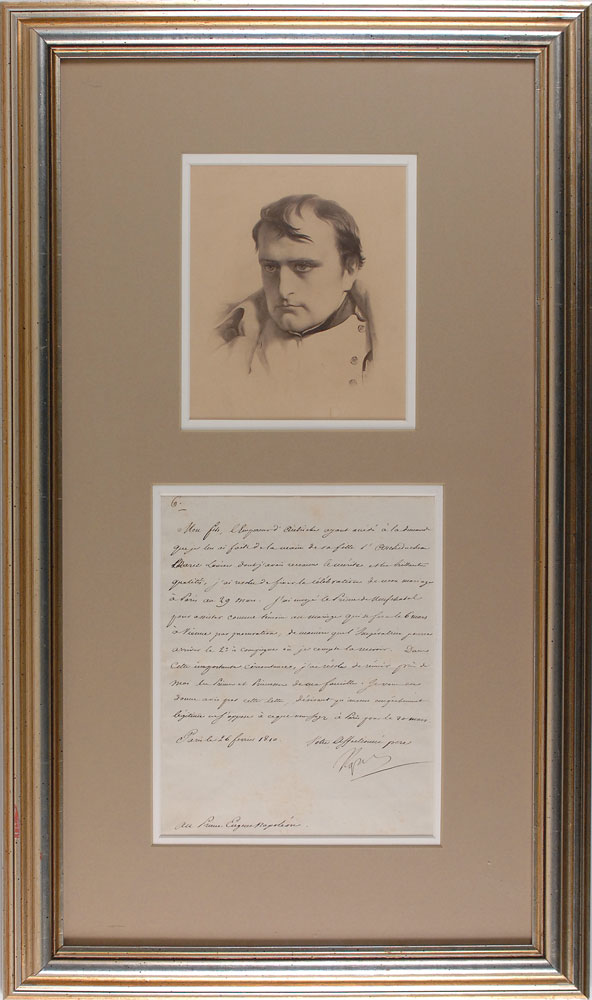 LS in French, signed “Napole,” one page, 7 x 9, February 26, 1810. Letter to his adopted son, Prince Eugene Napoleon de Beauharnais, announcing his intentions to marry Marie-Louise of Austria. In part (translated): “The Emperor of Austria has acceded to the request I made of him for the hand of his daughter Archduchess Marie Louise…For this important event, I have decided to reunite at my side the Princes and Princesses of my family.” Double-matted and framed with an imposing portrait to an overall size of 15.75 x 27. In fine condition, with central horizontal and vertical folds and some scattered mild foxing and toning. Oversized.

When Napoleon declared the hereditary transmission of power through the ‘direct, natural and legitimate line of descent from Napoleon Bonaparte, from male to male’ in 1804, he sealed the fate of his marriage to the aging Josephine. Despite their deep respect and love for one another, which continued for remainder of their lives, the two officially divorced in a grand ceremony on January 10, 1810. Determined to marry a European royal, thereby creating a strong alliance with another major power and helping legitimize his somewhat shaky claim to royalty, Napoleon began negotiations with Russia and Austria, finally reaching agreement with the Austrian Emperor to take his daughter, Marie-Louise. The two were married by proxy in early March, met for the first time at the end of the month, and held a civil ceremony at the start of April—an event for which Napoleon gathered “the Princes and Princesses of [his] family.” An excellent, historically significant, and personal letter regarding an important event in the life of the Emperor, centered on his hopes of building a dynasty. Pre-certified John Reznikoff/PSA/DNA and RR Auction COA.