“I’ve always seen Los Angeles as a microcosm of The States, a genetic blue-print,” writes Morrison in the spring of ‘71: “I came here originally to make films & got into music by accident” 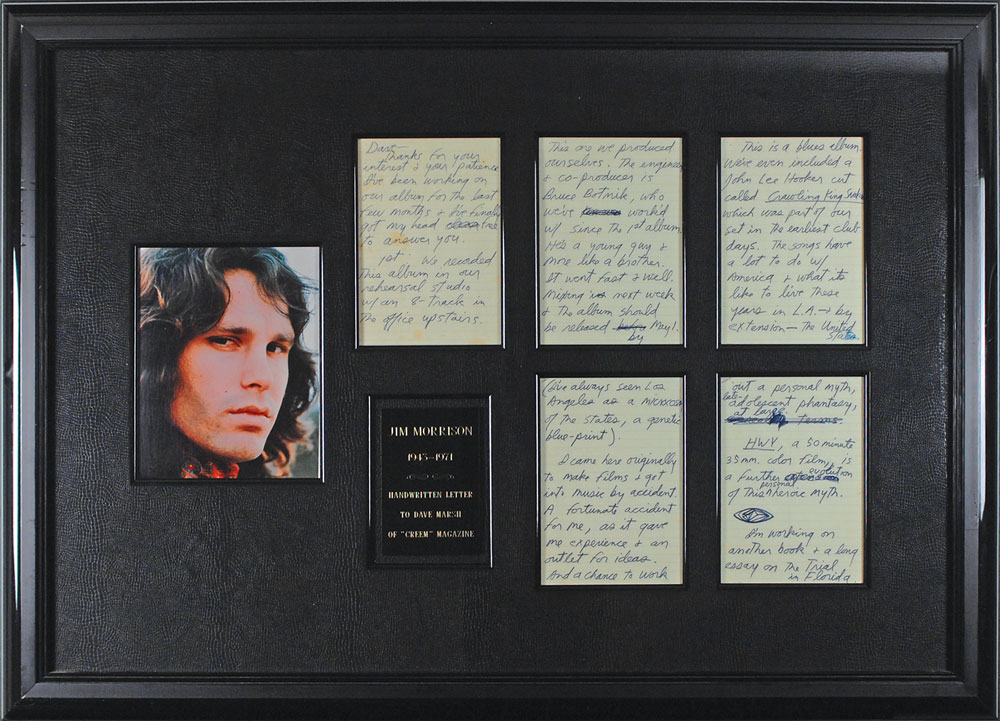 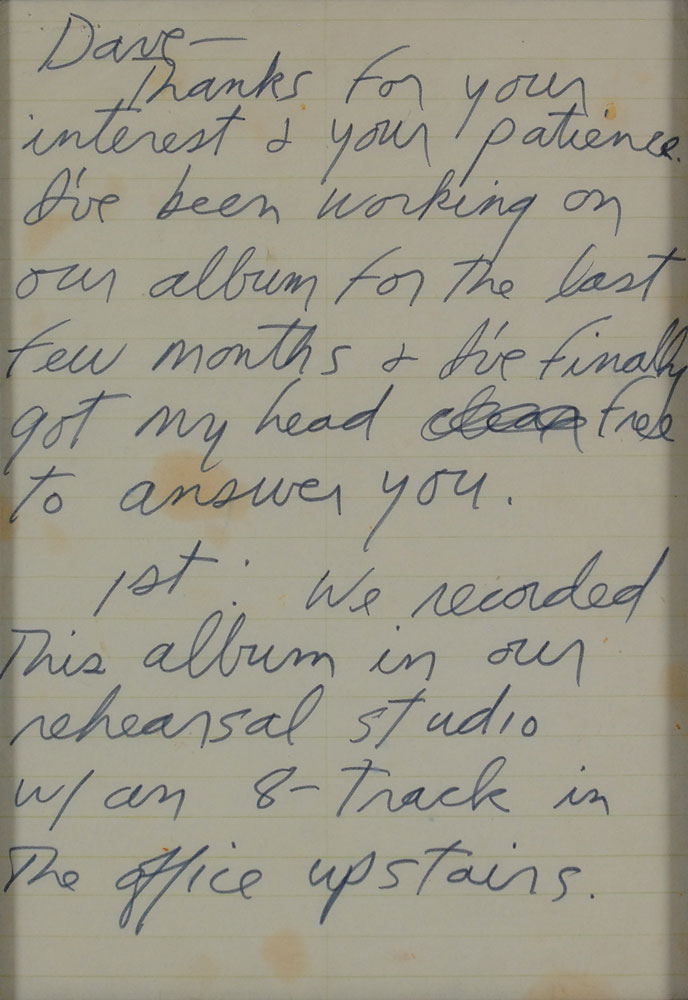 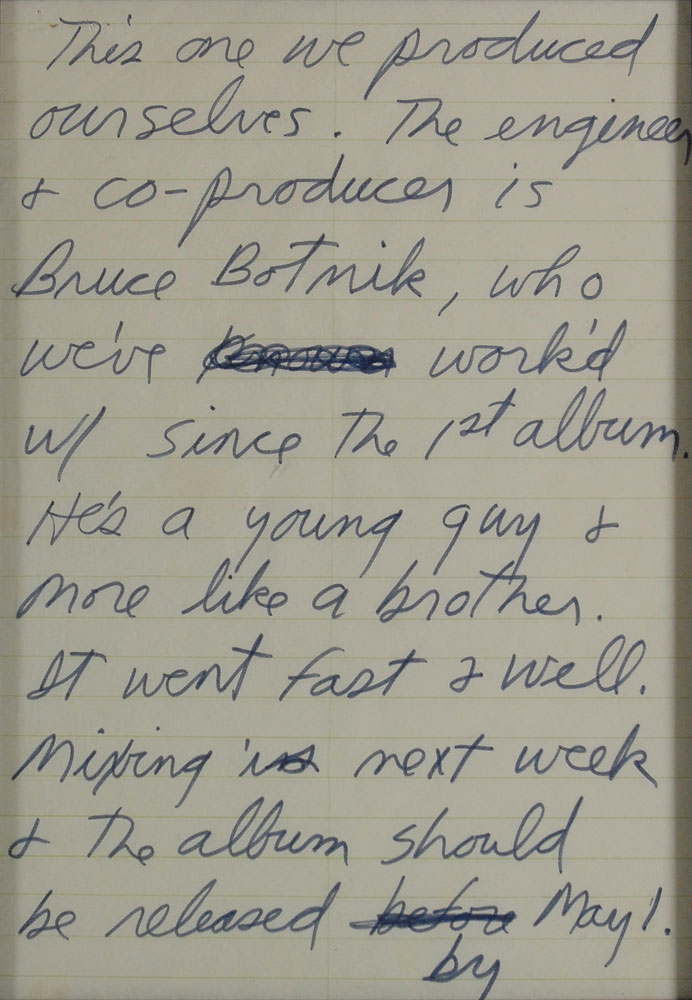 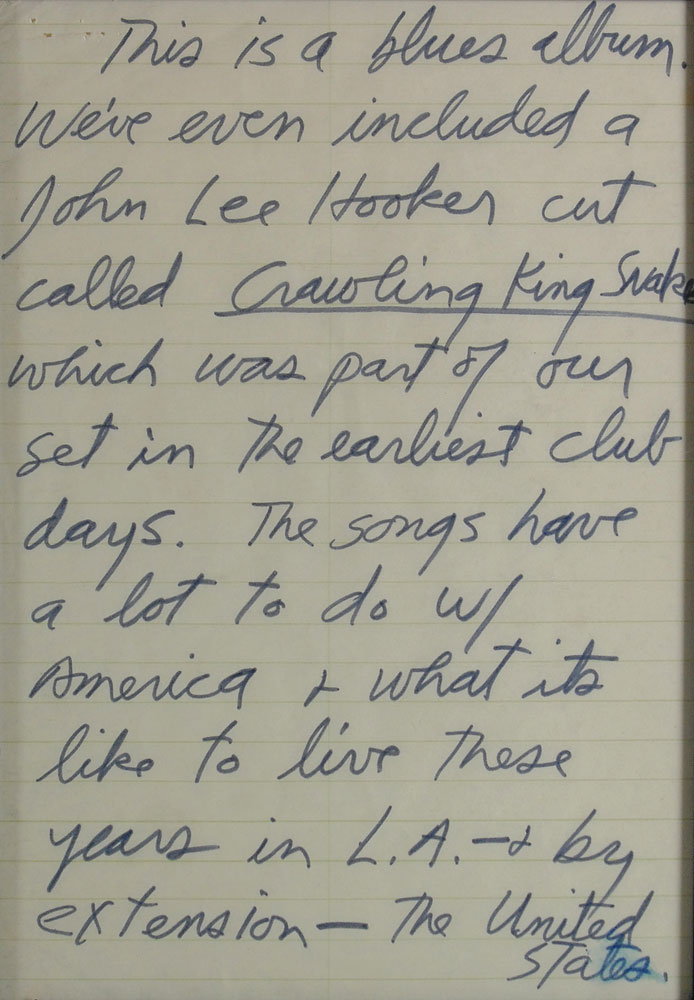 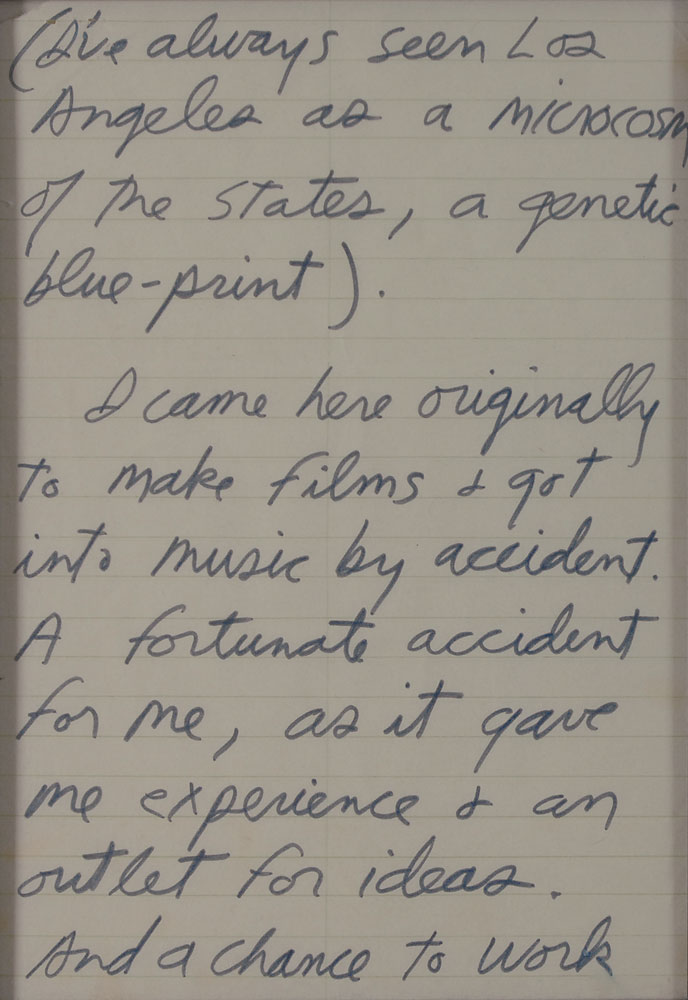 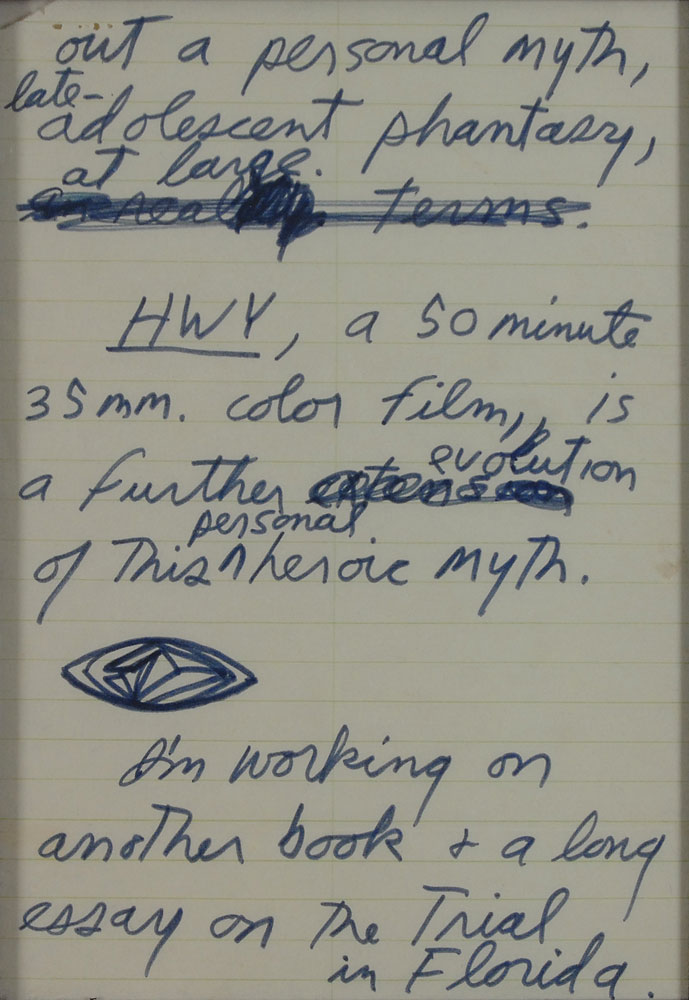 “I’ve always seen Los Angeles as a microcosm of The States, a genetic blue-print,” writes Morrison in the spring of ‘71: “I came here originally to make films & got into music by accident”

Autograph letter, five pages, lightly-lined, 6 x 8.25, no date, but circa Spring of 1971. Unsigned letter to Dave Marsh of Creem Magazine. In full (with spelling and grammar retained): “Thanks for your interest & your patience. I’ve been working on our album for the last few months & I’ve finally got my head free to answer you. 1st we recorded this album in our rehearsal studio w/ our 8-track in the office upstairs. This one we produced ourselves. The engineer & co-producer is Bruce Botnik, who we’ve worked w/ since the 1st album. He’s a young guy & more like a brother. It went fast & well. Mixing is next week & the album should be released by May 1. This is a blues album & we even included a John Lee Hooker cut called Crossing King Snake, which was part of our set in the earliest club days. The songs have a lot to do w/ America & what its like to live these years in L.A.—& by extension—The United States.

(I’ve always seen Los Angeles as a microcosm of The States, a genetic blue-print). I came here originally to make films & got into music by accident for me, as it gave me experience & an outlet for ideas, and a chance to work out a personal myth, late-adolescent phantasy, at large. HWY, a 50 minute 35 mm. color film, is a further evolution of this personal heroic myth. I’m working on another book & a long essay on the Trial in Florida.” Near the bottom of the final page, Morrison also adds a small doodle resembling and eye. Nicely matted and framed (with a textured almost lizard-like mat), a color portrait of Morrison, and a small plaque to an overall size of 41.5 x 30. In fine condition, with some small stains to the first page.

During the final stages of the mixing process for what would become their final album, L.A. Woman, Morrison responded to a letter from the always-critical founding editor of Creem, David Marsh, with extraordinary insight into his and The Doors’ life at the time. Proudly touting the work as a “blues album,” representing “what its like to live these years in L.A.,” he segues into his own personal experience with the city that made him. Admitting that he “got into music by accident” in his quest to live out a “personal heroic myth,” the UCLA film school grad discusses other aspects of his development as an artist, including his cinematic work HWY, and a book-in-progress on his trial in Florida (he was convicted of indecent exposure for an incident at a 1969 concert in Miami). Only a handful of Morrison correspondence has ever come to market, and with such remarkable personal and professional content and emphasis on Los Angeles, this scrawling five-page letter is by far one of the most important. A remarkable piece from the iconic rock front man, just months before his early death at the age of 27. Pre-certified Roger Epperson/REAL and RR Auction COA.