Arriving in Hawaii for the filming of Rainbow Bridge, “Jimi Hendrix, Seattle, Washington” and friends register at their hotel 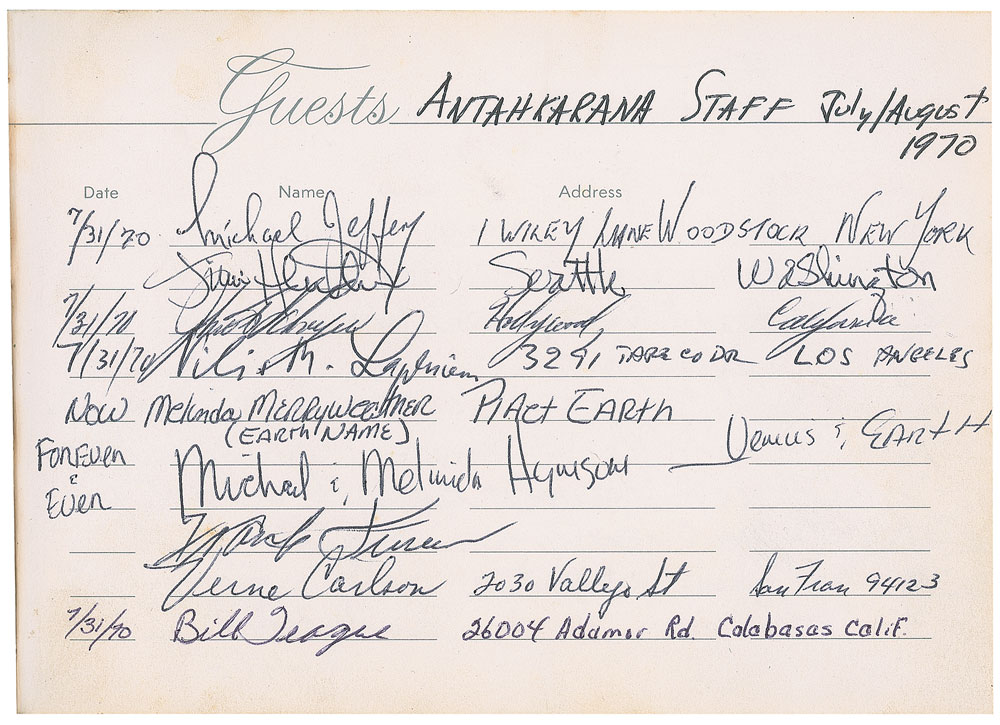 Arriving in Hawaii for the filming of Rainbow Bridge, “Jimi Hendrix, Seattle, Washington” and friends register at their hotel

Leatherbound guest book from a hotel in Hawaii, 8 x 6, signed inside in black ballpoint, “Jimi Hendrix, Seattle, Washington.” Although undated, the signatures immediately preceeding and following Hendrix’s signature are both dated July 31, 1970, the page is headed at the top in an unknown hand, “Antahkarana Staff July/August 1970,” and the page is also signed on both sides by 18 others, including Rainbow Bridge collaborators Michael Jeffrey (producer), Chuck Wein (director), Melinda Merryweather, John Schreyer (editor), Michael Hynson, Maureen Thornton, Miss Mercy, and Patricia Hartley. In fine condition.

The day prior to signing this register, Hendrix played a free outdoor concert on the slopes of Hawaii’s Haleakala volcano. The show would be included in the film Rainbow Bridge—a documentary about various singers, musicians, and artists, who attended a ‘New Age’ gathering in Maui—which was financed by Hendrix’s manager, Mike Jeffrey, who also signed the register. The final version of the film used very little footage from the show, as it was not intended to be a concert film, and no songs were released on the soundtrack due to poor audio quality due to the strong winds that day. The following day Hendrix and his reformed Experience, would play his final show in the United States, at the Honolulu International Center, before heading to Europe on the second leg of the tour, which concluded just two weeks before his untimely death. Pre-certified Roger Epperson/REAL and RR Auction COA.