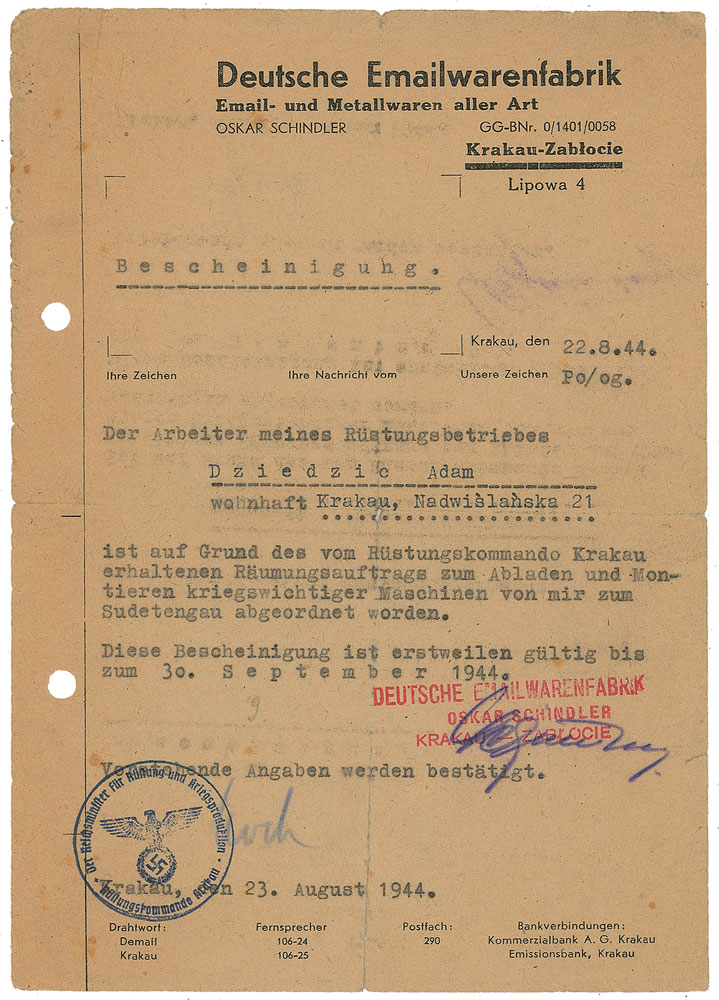 German industrialist (1908–1974) credited with saving almost 1,200 Jews during the Holocaust by employing them in his enamelware and ammunitions factories. Letter in German, one page, 5.75 x 8.25, Krakau-Zablocie, Poland, August 22, 1944. Letter regarding one of Schindler’s employees. In full (translated): “The employee of my armament factory, Adam Dziedzic, residing in Krakau, Nadwaislanska 21, on the order of the general military command in Krakau, received a clearings contract for unloading and assembling war-necessary machinery and has been sent to Sudetengau. This certificate is temporarily valid until September 30, 1944.” Letter bears Schindler’s German Enamelware Factory stamp below the text, and is signed over the stamp in blue pencil by Schindler.

Also includes a medical transfer document in German, one page, 5.75 x 8.25, Brunnlitz, Czechoslovakia, January 27, 1945. In full (translated): "It is herewith confirmed that Adam Dziedzic, born on May 28, 1922 in Krakau, residing in Krakau, Nadwaislanska, has been employed in my company since January 1, 1944. This certification is to be presented to the Health Department." Also bears Schindler’s German Enamelware Factory stamp below the text, and is signed by a company representative. In very good condition, with intersecting folds (slight edge separations and partial separation to lower quarter of central vertical fold), some scattered foxing and small edge tears, and filing holes to the left border. Accompanied by a letter of provenance in Polish from one of Dziedzic’s descendants, attesting to the authenticity of the documents.

These exceptional documents are especially desirable as there are very few from this period in Schindler's life, and their dates and locations 'bookend' the story surrounding the famous 'Schindler's List.' The first comes from Emalia (his initial enamelware factory in Krakau), where he employed over 1,000 Jewish people under an arrangement with the brutal Amon Goeth, who ran the adjacent Plaszow concentration camp. While prisoners at Plaszow were in constant fear for their lives under Goeth's sadistic reign, Schindler's facility offered a safe haven, where they had improved access to food and medicine, could worship freely, and did not need to live in constant terror. In the summer of 1944, Goeth's secretary alerted Schindler that the Nazis would be closing all factories not directly related to the war effort. Schindler countered this using bribery and leveraging relationships to obtain permission from the head of the armaments command—as referenced in the letter—to focus on producing arms and move the factory, workers included, from Krakau to Brunnlitz, located in the Sudetenland (Sudetengau).

This document is of great historical importance, as it verifies and dates this move, often thought to have begun later. With this permission, Dziedzic, an important supervisor at the factory, could begin moving machinery to the new location. The famous list was developed shortly hereafter, in October 1944, naming approximately 1,000 Jewish workers to relocate to the new factory—without the move, there is no list. As evidenced by the second document, issued from Brunnlitz, Dziedzic must have remained in the new location and worked in an important supervisory role. This document was most likely necessary to allow the Polish Dziedzic to safely pass between Brunnlitz and Krakau, as Germans considered Poles to be racially inferior. He would have been returning to Brunnlitz either to receive medical care or to search for supplies, such as food and medicine, which were scarce in the Sudetengau.

It is also interesting to note that during this time—January 1945—Schindler's wife, Emilie, ran day-to-day operations at the Brunnlitz factory, while Oskar frequently traveled in search of provisions. So, in effect, Dziedzic's medical pass was issued under the authority of both Oskar and Emilie. Schindler documents are extremely difficult to find and rarely surface for public auction—especially those of such immense historical value that are associated with the 'Schindler's List' period. Pre-certified John Reznikoff/PSA/DNA and RR Auction COA.