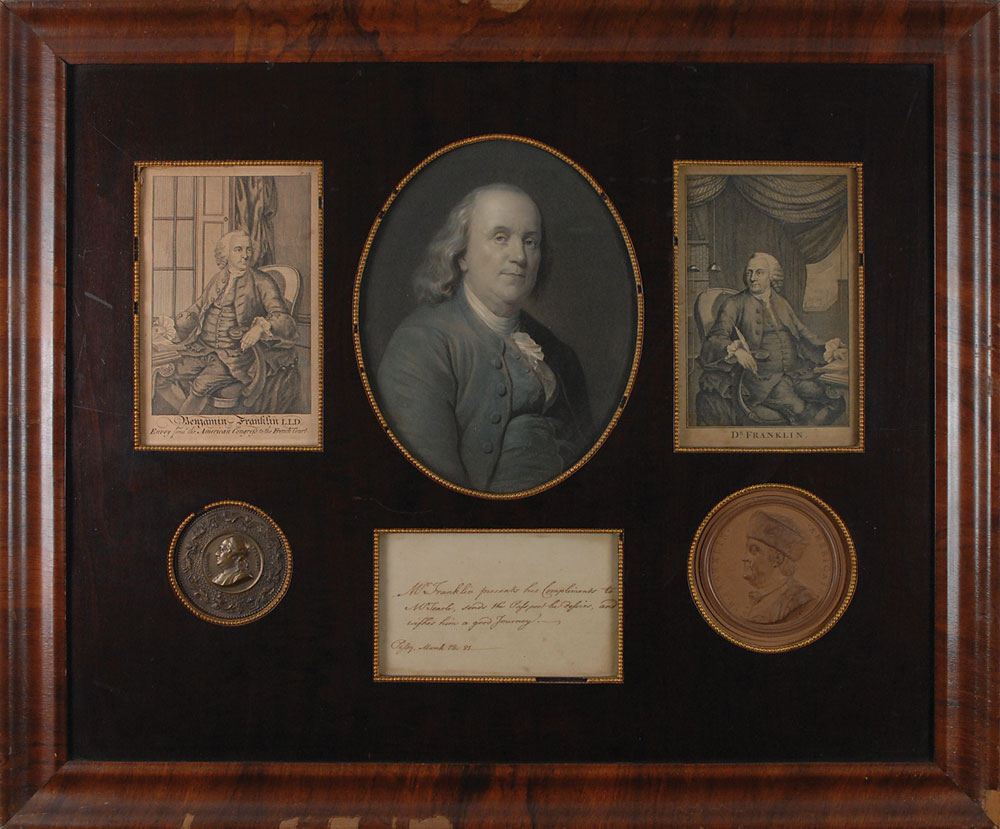 Revolutionary War–dated third-person ALS signed in the text, “Mr. Franklin,” one page, 6 x 3.5, Paris, France, March 12, 1781. In full: “Mr. Franklin presents his compliments to Mr. Tearle, sends the passport he desires, and wishes him a good journey.” Also included are a color portrait of Franklin, two 18th century engraved portraits, and two medals featuring Franklin in relief, including one rare and highly sought after 1777 terracotta medallion by Jean Baptiste Nini, all of which are matted and framed with the letter to an overall size of 25 x 20.75. In fine condition, with light scattered toning and soiling, and some chipping to the frame itself.

At this time, Franklin was in France serving as an ambassador to the court of Louis XVI. He proved an integral part of American diplomatic relations overseas, where he helped to negotiate the critical military alliance with France in 1778, as well as the Treaty of Paris in 1783, which ended the Revolutionary War. While there, he also took it upon himself to develop the first American passport, based upon the design used by the French—a single sheet of paper with a description of the bearer, valid for between three and six months. In addition to the fascinating association between the content of the letter and Franklin’s creation of the passport, the Nini medallion housed in the display is quite scarce and valuable in itself. Sculpted from a sketch the year before Franklin was commissioned as minister to France, it became a popular collectible among the pro-American people of the country. Franklin references Nini’s ‘clay medallion’ in a 1779 letter to his daughter, remarking that it was ‘the first of the kind made in France,’ and that a multitude of images of him in various formats had been created in the following years—by then, his ‘face was as well known as that of the moon.’ Oversized. Pre-certified John Reznikoff/PSA/DNA and RR Auction COA.