Supporting Union soldiers in an extensive collection of over 300 autographs, photos, and ephemera 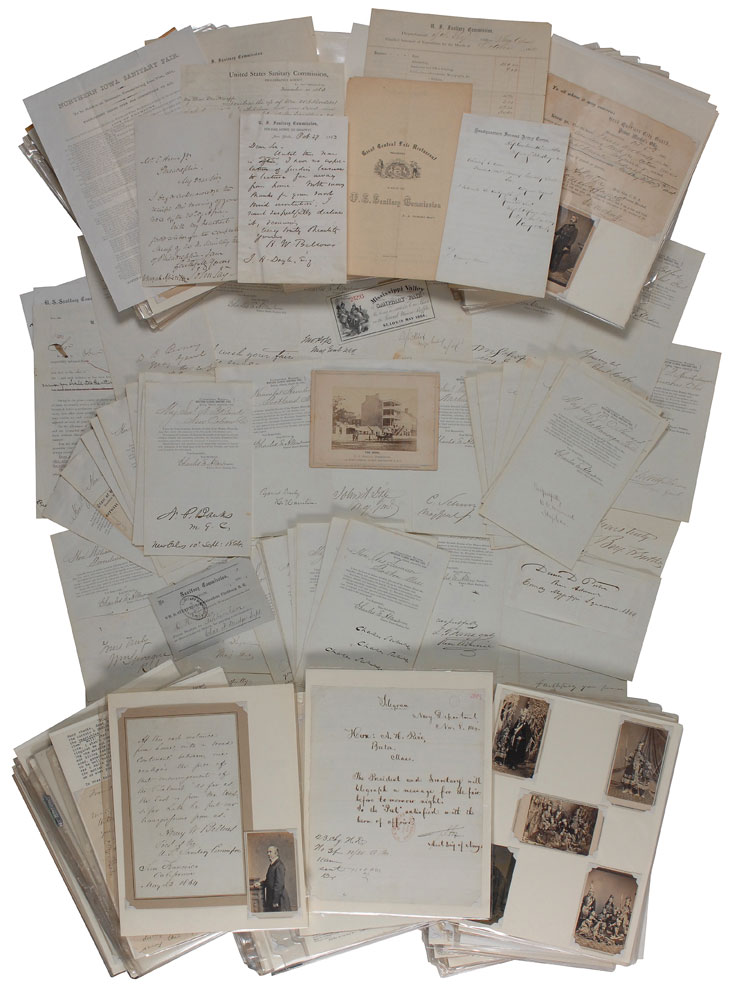 Supporting Union soldiers in an extensive collection of over 300 autographs, photos, and ephemera

The United States Sanitary Commission was a relief agency designed to support sick and wounded soldiers during the Civil War, created in 1861 in response to the unsanitary and poor living conditions of Union soldiers—the close quarters, general filth, and poor diets of the enlisted men led to epidemics of disease for which the Army was unprepared. The commission organized massive groups of volunteers and acquired charitable contributions to improve conditions and offer care for soldiers in the field and in military hospitals. In 1863, it began to hold fairs, which became wildly successful fundraising events and allowed individual citizens to demonstrate support for the troops, encouraging a broad feeling of unity and national identity throughout the country.

Enormous collection of documents, letters, photos, and ephemera related to the Civil War–era Sanitary Fairs, primarily those in Illinois and Philadelphia in 1864. The group consists of over 320 pieces, over 150 of which are signed. Organizers for fairs in both locations contacted prominent individuals in all fields—primarily focused on political and military figures—and requested autographed material and mementos for fundraising purposes. These signed items include many autograph request documents, as well as assorted letters, documents, and individual signatures. In overall fine condition.

Letters, most of which are ALSs, include Winfield Scott Hancock, Schuyler Colfax, Jared Sparks, John J. Peck, Robert Charles Winthrop, Dorothea Dix, and many of the organizers, such as Henry Whitney Bellows and Ellen McLellan. Some individual signatures include Benjamin F. Butler, David Dixon Porter, Owen Lovejoy, and John L. Worden. The majority of these were sent to organizers of the Sanitary Fair in Philadelphia, either complying with an autograph request or wishing them luck with their fair.

Also includes approximately 115 unsigned carte-de-visite photos of exhibitions at the Sanitary Fairs or of the various autograph signers, as well as 15 stereoview photos of the Great Central Fair in Philadelphia and Metropolitan Fair in New York. Other pieces of ephemera include approximately 40 bulletins, tickets, announcements, receipts, documents, and mailing envelopes related to various Fairs.

All together, this is a remarkably comprehensive collection that demonstrates the widespread and fervent support of the Sanitary Commission's efforts. In addition to the autographic material from political and military notables, the letters, documents, and photographs offer great insight into the the inner workings of these fairs and the complexity involved in orchestrating such large events. Impressively large and broad in scope, this is a one-of-a-kind collection that celebrates the often overlooked contributions of the Sanitary Commission to the Union war effort.