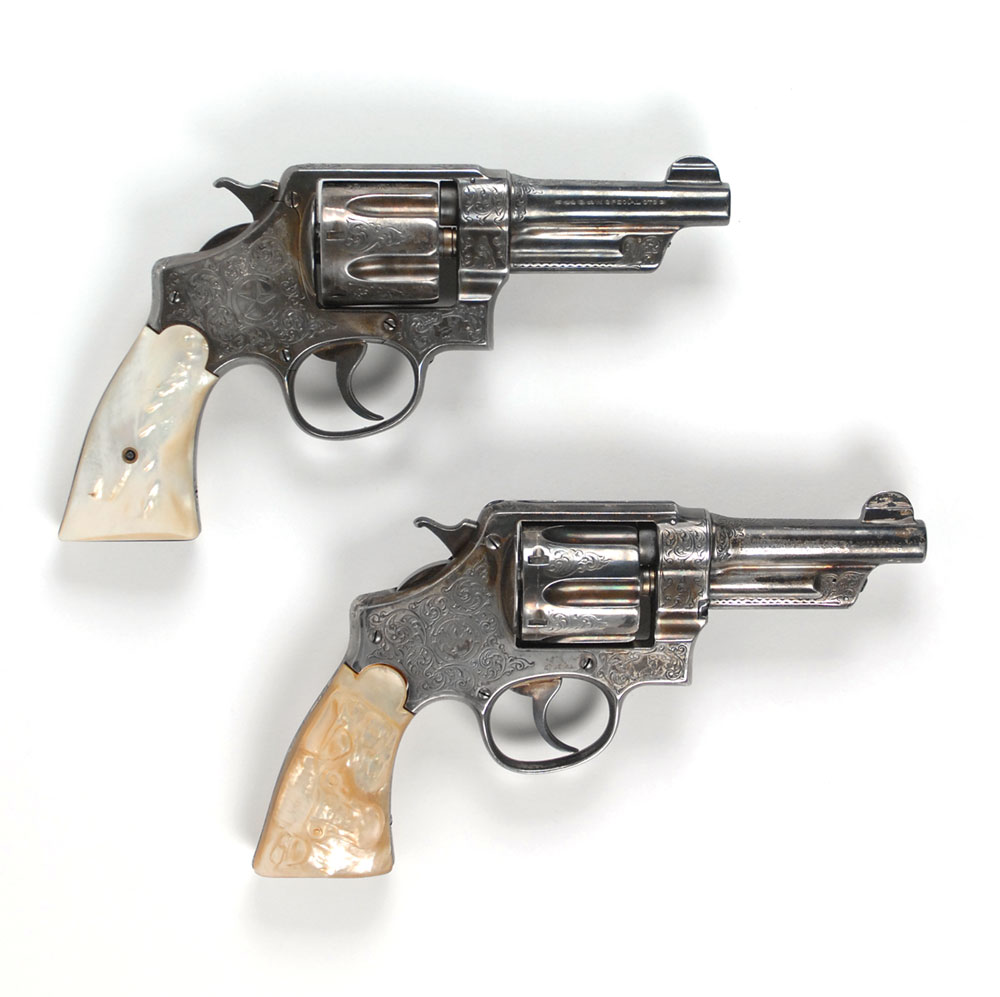 A pair of silver-plated and engraved Smith and Wesson .44 Special Hand Ejector Double-Action revolvers with mother-of-pearl grips, carried by famed Texas Ranger Clint Peoples. Peoples was born in Bridgeport, Texas, in 1910 and wanted to become a Texas ranger from an early age. His law enforcement career began in 1930 as a deputy sheriff for Montgomery County, Texas, after which he was appointed as a special Texas ranger. He then held positions as a chief deputy constable, chief deputy sheriff, and a Texas highway patrolman, before being appointed as a Texas ranger private on November 30, 1946. Later he served as captain of Headquarters Company from 1953 to 1957, and captain of Company F from 1957 to 1967. He became senior ranger captain in 1969 until his retirement in 1973. That same year he was appointed the US Marshal for the Northern District of Texas by President Richard Nixon. A hardcover book by James M. Day titled Captain Clint Peoples: Texas Ranger, Fifty Years a Lawman is included with these revolvers. The book covers Clint’s early life and details his many encounters with miscreants, hardcases, and other Texas notables. The book is signed and inscribed by Peoples to the mother of the consignor. Also accompanied by two identical original signed affidavits signed by Clint Peoples’s wife Donna Peoples attesting to each gun’s authenticity, an original laminated May 9, 1972 letter from Smith & Wesson to Clint Peoples referring to these exact guns and referencing them by serial number, and an original September 11, 1973 letter written to Raymond Brown presenting him with the here-offered pair of guns and signed by Clint Peoples.

The revolvers are engraved similarly and at first glance appear to be identical. They both have full engraving coverage in a well-done leafy scroll with each having small vignettes of a running buffalo, a stag in a woodland, and oddly, a stone bridge over a waterway. Both are engraved on the backstraps in script with “Clint Peoples,” over “Senior Ranger Captain,” in block lettering. Both revolvers have 4″ barrels with shrouded ejector rods.

Revolver serial #12975?, has the third locking system referred to as Triple Lock Smith and Wesson. It has service style mother-of-pearl grips with a carved bull head on the right side. This revolver served as the inspiration for engraving on the second revolver, serial #32586. This revolver’s engraving differs only in that a Texas ranger badge is engraved on the side plate instead of the Smith and Wesson monogram. The mother-of-pearl grips on this one are not carved. This revolver is signed under the grips by deceased Master Engraver Frank Hendricks, who became the first president of the Firearms Engravers Guild of America. This revolver has an unnumbered barrel, otherwise both revolvers have matching numbers on the metal parts. Both revolvers function well with the bores having very good rifling and minor fine pitting. The silver-plating has tarnished to an attractive blue/black with areas of light wear showing bright silver. The plain mother-of-pearl grips have a tiny chip at the heel in the left side and the carved grips have a tiny chip at the same spot with a hairline crack at the butt.

Although guns like these served many Western lawmen for serious social work with the criminal element, they were also popular accessories for rangers to wear to social events like barbecues where they tried to impress their friends and neighbors. Clint Peoples died in an automobile accident on June 22, 1992.