Historic first-hand accounts of the bombing run on Hiroshima, complete with three diagrams of the planes positions and detonation 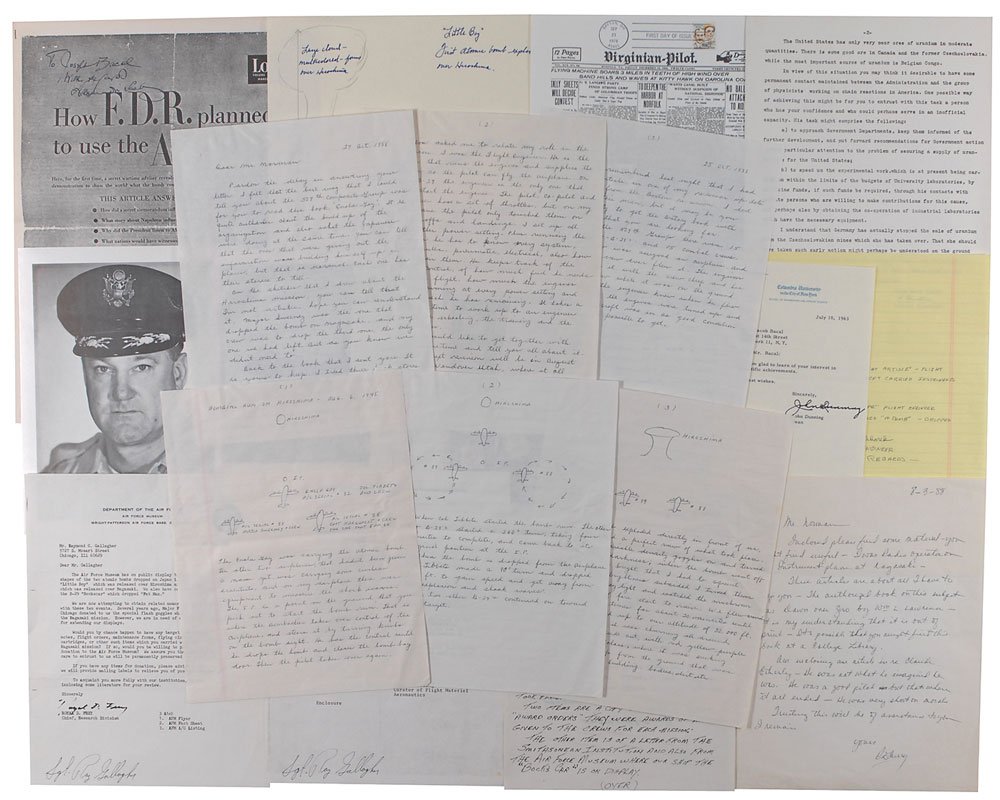 Historic first-hand accounts of the bombing run on Hiroshima, complete with three diagrams of the planes positions and detonation

The Ferebee letter is dated April 10, 1997, and reads, in part: "Much of the information in the movies & books was not correct…I flew 13 missions east of England with Paul & Dutch, then we went to N. Africa in Nov. for the invasion there. We continued together until Jan 1st 1943…I stayed and continued to fly with different crews when requested until I had 64 at which time I came home from Italy in May 1945… had not seen Paul since he left the crew in Jan. 1943. They told Paul that there would be two weapons & the approx. yield would be 20 thousand tons and should destroy all within 5 miles. Also he could get two crews by name. We discussed that information which was all he could tell me, and that night we decided to get Van Kirk to join me as the Nov. Bombadier team & I suggested we get Kermit Beachan as the bombadier and Jim Van Pelt which I had met at Admore, Okla as his navigator. Paul said he had three pilots and two flight engineers, and a gunner to train them…We took off at 0215 AM and approx. 2 hrs later prior to climbing Capt. Parsons & Jeppson started arming the bomb, and I observed it from the entrance to the bomb bay. Once that was completed I went back up front to my seat and relaxed until we got to enemy territory. I could see the target at approx. 60-70 miles and when Paul took the heading Dutch gave him I took control by auto-pilot and had very little to do, because the heading was almost perfect. When the bomb left the AC I stood up & watched to see if it was falling free until I could no longer see it as Paul was in a tight turn, and when we leveled out the cloud was at our altitude. It was a horrible sight and I had never seen anything to compare it to. Capt. Parsons & I were to send a message as to our opinion as to where it was a full order detonation. My message to Guam was that it was satisfactory and Capt. Parsons was very satisfactory, and that caused a delay of approx. one hour before it was forwarded to the president. After taking a good look at the city we continued on to Tinian…That is the first time I ever heard the word atomic used with the project. I was confused as to just what it meant, and it had to be explained to me just what had happened. My main concern was that it had worked and that maybe soon all the millions of people could go home. I never dreamed that today we would still be asking questions about it. I was married after the war & had 4 boys & it was not discussed at home and has never bothered me and I would do it again under the same circumstance. I'm sure it saved millions of lives by helping bring the war to a close. Sincerely, Tom Ferebee, Bombadier."

Corliss has added three diagrams and notations on two lined sheets. “Bombing Run on Hiroshima Aug. 6, 1945 (Diagram 1) The Enola Gay was carrying the atomic bomb. The other two airplanes, that hadn't been given a name yet, was carrying some civilian scientists, and on my airplane there was equipment to measure the shock waves…(Diagram 2) When Col. Tibbets started the bomb run. The other two B-29's started a 360 degree turn, taking four minutes to complete, and came back to its original position at the I. P. When the bomb is dropped from the airplane Col. Tibbets made a 90 degree turn and dropped 2000 ft. to gain speed and get away from the explosion and shock waves. The two other B-29's continued on toward the target. (Diagram 3) The bomb exploded directly in front of us, so we had a perfect view of what took place. We had variable density goggles on and turned to total darkness; when the bomb went off it was so bright that I had to squint. When the brightness subsided I turned them back to daylight and watched the mushroom type ball of fire start to raise. We flew around it several times for about 20 minutes until it had raised up to our altitude of 30,000 ft. All the time it was churning all around, sometimes inside out, with red, yellow, purple and brown colors, where it was sucking everything up from the ground that was loose; cars, building, bodies, dirt, etc."