Beautiful copy of the first lady’s personally overseen Historic Guide to the White House, signed by the presidential couple to a longtime, devoted staff member 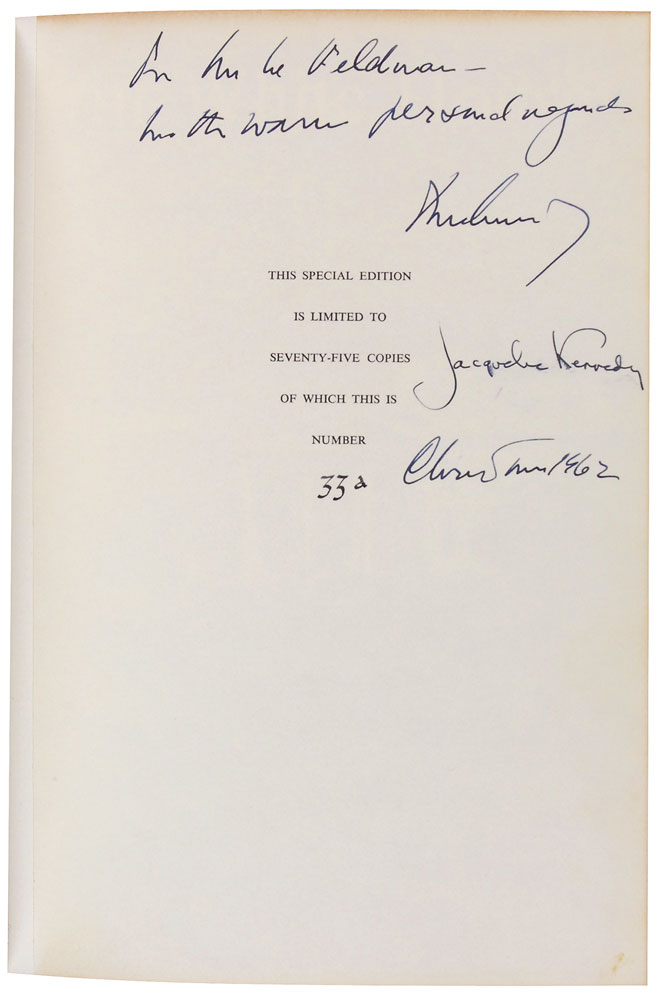 Beautiful copy of the first lady’s personally overseen Historic Guide to the White House, signed by the presidential couple to a longtime, devoted staff member

During their official Christmas party, held on December 12, 1962, President and Mrs. Kennedy presented each member of the Kennedy administration with a stunning, red leather-bound copy of the Executive Mansion’s story, the publication of which was overseen by the first lady as part of her restoration and preservation of the White House. This copy, inscribed, “with warm personal regards” to “Mike” Feldman, undoubtedly held much deeper regards than could be conveyed through these four words inside a book cover. Myer (“Mike”) Feldman began working closely with Kennedy in 1957 as a legislative assistant, and had found his place as a close confidante by the time the Senator earned the Democratic nomination for the 1960 presidential election. He played a crucial role in Kennedy’s success, heading the research team that maintained ‘Nixopedia,’ a compendium of Nixon’s every utterance, vote, and potential weakness that would help during crucial debates with their Republican opponent. After Kennedy’s election, Feldman remained by his side, serving as deputy special counsel to the president, writing speeches, working on trade matters and legislative issues, and serving as White House liaison to several Cabinet officials. He also provided invaluable insight into the American Jewish community and Israel’s emerging nuclear arms program. A gorgeous book centered on one of Jacqueline Kennedy’s most memorable contributions during her time as first lady, made exponentially more desirable by its inscription to a close friend and loyal staff member to the president through the most important years of his career. RR Auction COA.