“Through hot wars and cold, through recession and prosperity, through the ages of the atom and outer space, the American people have never faltered and their faith has never flagged” 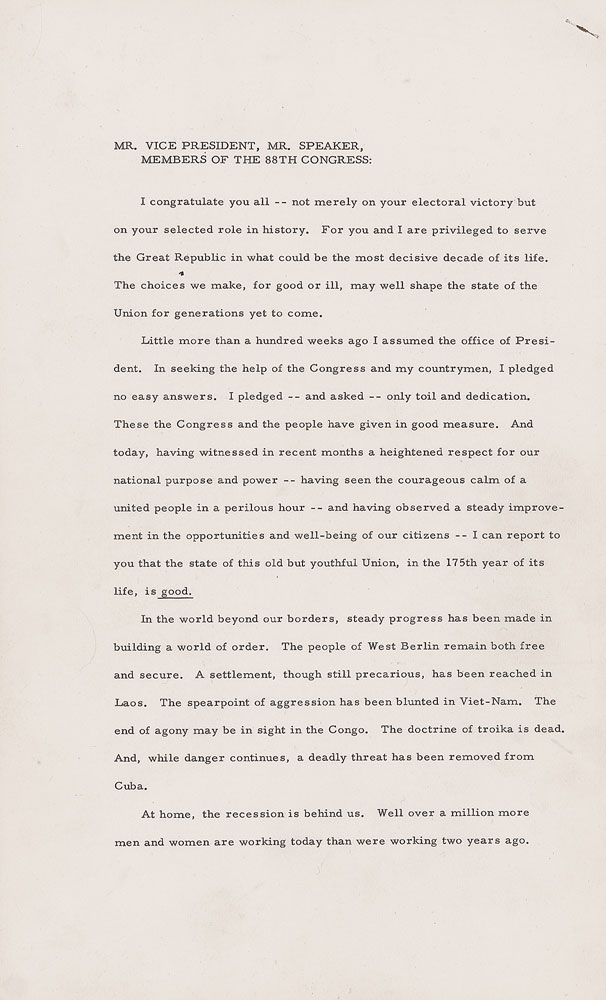 “Through hot wars and cold, through recession and prosperity, through the ages of the atom and outer space, the American people have never faltered and their faith has never flagged”

Incredibly rare signed manuscript of Kennendy’s third and final State of the Union address, given on January 14, 1963, on 17 pages of legal-size 8.5 x 14 White House watermarked paper. Kennedy’s final State of the Union address was quite memorable as he touched upon the nation’s economy and several areas of foreign policy, including Cuba, China’s invasion of India, West Berlin, and Vietnam. In part: “I can report to you that the state of this old but youthful Union, in the 175th year of its life, is good. At home, the recession is behind us. Well over a million more men and women are working today than were working 2 years ago. The average factory work week is once again more than 40 hours; our industries are turning out more goods than ever before; and more than half of the manufacturing capacity that lay silent and wasted 100 weeks ago is humming with activity. In short, both at home and abroad, there may now be a temptation to relax. For the road has been long, the burden heavy, and the pace consistently urgent. But we cannot be satisfied to rest here. This is the side of the hill, not the top. The mere absence of war is not peace. The mere absence of recession is not growth. We have made a beginning—but we have only begun…Through hot wars and cold, through recession and prosperity, through the ages of the atom and outer space, the American people have never faltered and their faith has never flagged. If at times our actions seem to make life difficult for others, it is only because history has made life difficult for us all…I think these are proud and memorable days in the cause of peace and freedom. We are proud, for example, of Major Rudolf Anderson who gave his life over the island of Cuba. We salute Specialist James Allen Johnson who died on the border of South Korea. We pay honor to Sergeant Gerald Pendell who was killed in Viet-Nam. They are among the many who in this century, far from home, have died for our country. Our task now, and the task of all Americans is to live up to their commitment.” Signed on the final page in black ink, “John F. Kennedy.” In fine condition, with a staple hole to top right corner of each page.

On January 14, 1963, President Kennedy stood before a joint session of the US Congress to deliver his third, and what would become his final, State of the Union address. Memorable in its tone of confidence in both the nation’s domestic prospects and its foreign policy, the address highlighted recent achievements—a decrease in unemployment and an increase in industry, the peaceful resolution of the Cuban Missile Crisis, and easing tensions with Vietnam, among others—but warned against the continuing threat of Communist nations. Discussing tensions within the Communist bloc, he warns, “hope must be tempered with caution. For the Soviet-Chinese disagreement is over means, not ends. A dispute over how best to bury the free world is no grounds for Western rejoicing.” Remembering those who gave their lives in Cuba, South Korea, and Vietnam, he proclaims, “difficult days need not be dark. I think these are proud and memorable days in the cause of peace and freedom,” and ends his address with a note of hope. While signed copies of the press release for this memorable address can be found at auction from time to time, this official White House release, holding the watermarked presidential seal, is of the utmost rarity. A pristine and highly desirable piece from a historic moment. RR Auction COA.