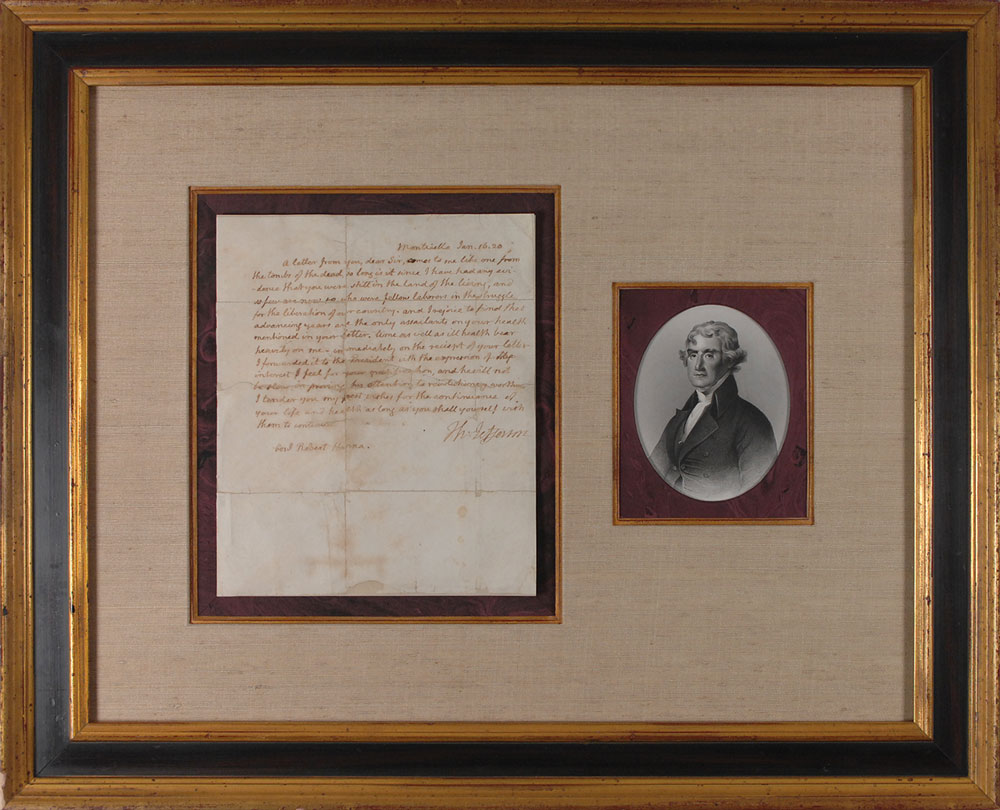 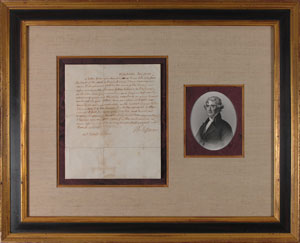 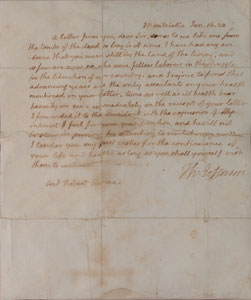 ALS signed "Th: Jefferson," one page, 8 x 9.5, Monticello, January 16, 1820. Letter to Robert Hanna, Sr. In full: "A letter from you, dear sir, comes to me like one from the tombs of the dead, so long is it since I have had any evidence that you were still in the land of the living and so few are now who were fellow laborers in the struggle for the liberation of our country. And I rejoice to find that advancing years are the only assailants on your health mentioned in your letter. Time, as well as ill health, bear heavily on me. Immediately on the receipt of your letter, I forwarded it to the President with the expression of interest I feel for your petition, and he will not be slow in proving his attention to Revolutionary mothers. I tender you my best wishes for the continuance of your life and health as long as you shall yourself wish them to continue." Double cloth-matted and framed with a portrait of Jefferson to an overall size of 25 x 20.25. Intersecting folds, one through a single letter of the signature, several repairs to separations along folds and creases, an area of repaired paper/word loss to center of letter affecting small portions of four words of text, and scattered light soiling, otherwise very good condition. Provenance: Christie's, June 2003.

Nearly half a century after writing the Declaration of Independence, having settled into retirement at Monticello and begun work on his newly founded University of Virginia, Jefferson received an unexpected letter from an old friend, General Robert Hanna. His former classmate at the College of William and Mary, Hanna also served bravely in the Revolutionary War, fighting in several key southern battles including Kings Mountain and Cowpens. He went on to become one of Indiana's pioneering settlers, and in 1816 played a key role in drafting the state's Constitution. This wonderfully gracious letter is Jefferson's response to Hanna's request that he forward President Monroe a petition requesting pensions for widows of veterans. Pleased to assist, Jefferson writes that he immediately did so "with the expression of interest I feel for [it]," believing that Monroe would "not be slow in proving his attention to Revolutionary mothers." A truly remarkable letter from one of America's Founding Fathers, delighted to hear from a long-since forgotten fellow patriot. Oversized.