Homesick while stationed in Germany Elvis writes to family friends at the start of 1959, “I wish we could have been in Memphis and at good old Graceland” 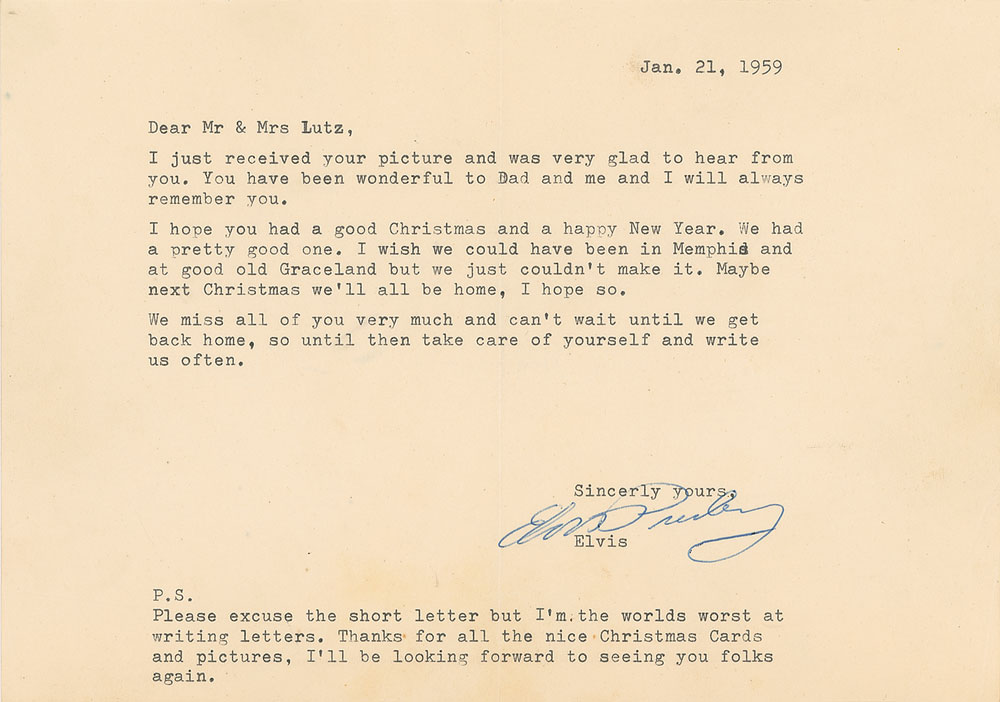 Homesick while stationed in Germany Elvis writes to family friends at the start of 1959, “I wish we could have been in Memphis and at good old Graceland”

TLS, one page, 8.25 x 5.75, Bad Nauheim, Germany, January 21, 1959. Letter to Mr. and Mrs. M. J. Lutz, written from the Hotel Grunewald. In full: “I just received your picture and was very glad to hear from you. You have been wonderful to Dad and me and I will always remember you. I hope you had a good Christmas and a happy New Year. We had a pretty good one. I wish we could have been in Memphis and at good old Graceland, but we just couldn’t make it. Maybe next Christmas we’ll all be home, I hope so. We miss all of you very much and can’t wait until we get back home, so until then take care of yourself and write us often.” Under his signature, a typed postscript reads, “Please excuse the short letter but I’m the world’s worst at writing letters. Thanks for all the nice Christmas Cards and pictures. I’ll be looking forward to seeing you folks again.” In fine condition, with a central vertical fold, and a few light creases and wrinkles. Accompanied by the original mailing envelope with “Elvis Presley, Hotel Grunewald, Bad Nauheim, Germany,” typed in the return address area. Elvis valiantly tried to ease his homesickness while in Germany. Although he lost his mother before joining the army, he was joined by his father, his paternal grandmother ‘Minnie Mae,’ and a few friends from Memphis, including a couple future ‘Memphis Mafia’ members. Even with the White House being deluged with letters for his discharge, Presley would miss another Christmas at home, not being discharged until March of 1960. Any correspondence from Presley is quite scarce and highly sought after by collectors. Pre-certified Roger Epperson/REAL and RR Auction COA.