"I think Sherman will move to Weldon," the besieged Lee reveals his impending doom to General Johnston from Petersburg. “We cannot fight Grant to advantage as long as he holds his entrenchments” 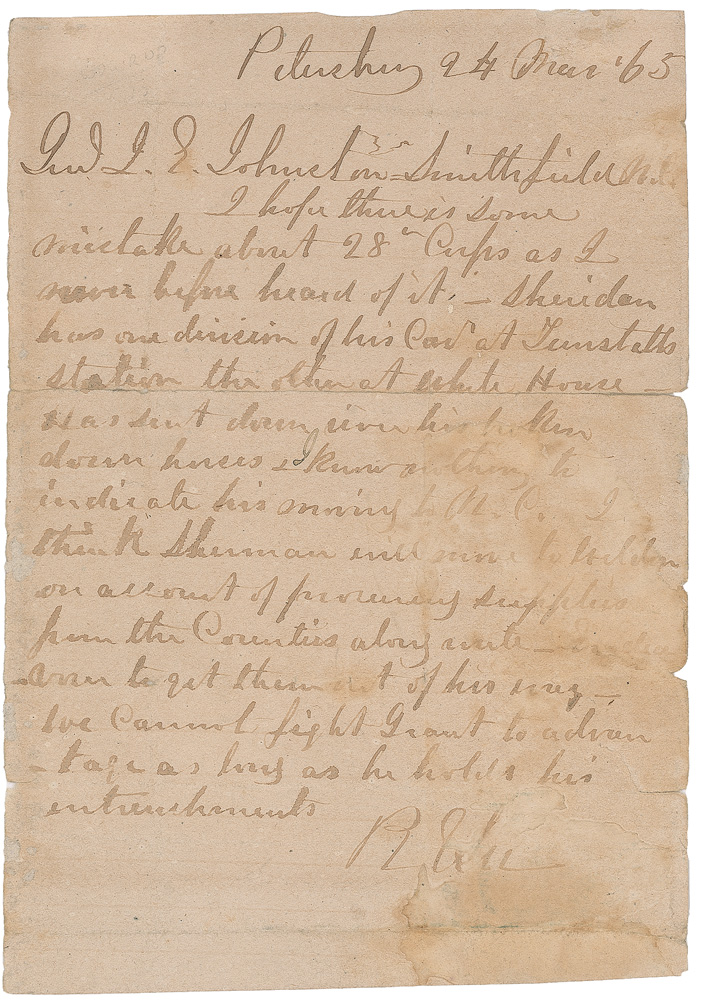 "I think Sherman will move to Weldon," the besieged Lee reveals his impending doom to General Johnston from Petersburg. “We cannot fight Grant to advantage as long as he holds his entrenchments”

Career army officer and the most successful general of the Confederate forces during the Civil War (1807–1870). He eventually commanded all Confederate armies as general-in-chief. His victories against superior forces in an ultimately losing cause won him enduring fame. After the war, he urged sectional reconciliation, and spent his final years as president of the school that would come to bear his name, Washington and Lee University. Important war-dated ALS signed “R. E. Lee,” one page, 5 x 7, Petersburg, March 24, 1865. Letter to “Genl. J. E. Johnston, at Smithfield, N. C.” In full: “I hope that there is some mistake about 28th Corps as I never before heard of it. Sheridan has one division of his Cav. at Tunstalls Station the other at White House. Has sent down river his broken down horses & I know nothing to indicate his moving to N. C. I think Sherman will move to Weldon on account of procuring supplies from Counties along route. Endeavor to get them out of his way. We cannot fight Grant to advantage as long as he holds his entrenchments.” Old repairs to reverse of several fragile intersecting folds and small tears, a horizontal fold through signature, damp staining to right side of letter lightly affecting some words of text and a bit of the signature, and portions of text and signature a bit light, but still completely legible, otherwise very good condition.

Besieged in the crucial railroad supply town of Petersburg, Virginia since June 1864, Lee’s troops spent nine brutal months attempting to force Grant's army to retreat. With Philip Sheridan's cavalry on the way from the Shenandoah Valley with another 50,000 Union troops, and Sherman preparing to join Grant from the Carolinas (after defeating this letter's recipient, Joseph E. Johnston, in the decisive Battle of Bentonville on March 21), the already severely weakened and outnumbered Confederate forces were running out of time. In the early morning hours of March 25, 1865, Lee ordered a surprise attack on the Union lines at Fort Stedman under Maj. Gen. John Brown Gordon, hoping to force Grant to retreat and protect his supply depot at City Point. Lacking the power to press forward, however, the Confederates were unable to withstand the Union's counterattack and retreated to their original defensive lines. Finally yielding to the overwhelming pressure and unavoidable defeat, Lee abandoned both cities in April 1865, leading to his surrender at Appomattox on April 12. Accounting for generals Grant, Sherman, and Sheridan as the forces mount against him, this extraordinary letter to Johnston, written one day before the final attempt at securing Virginia, is one of the finest Lee pieces we have ever offered. Pre-certified John Reznikoff/PSA/DNA and RR Auction COA.