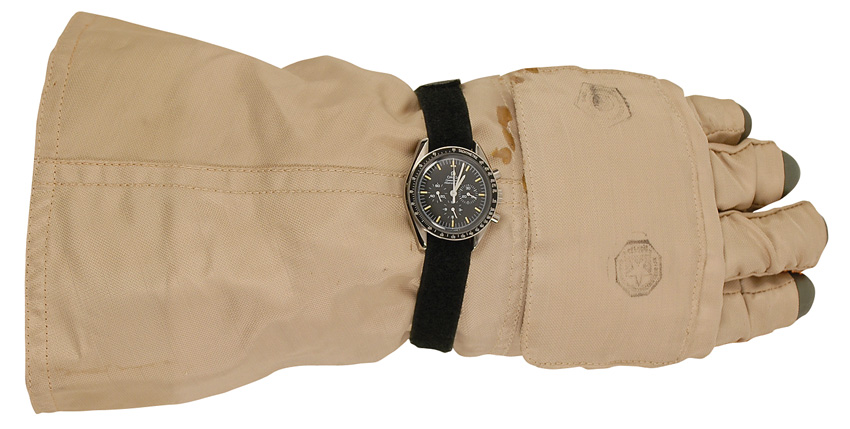 Two flown and EVA-used items worn by cosmonaut Gennadi Mikhailovich Strekalov. An important Omega Speedmaster Professional manual chronograph with NASA flight qualification logo on back, delivered to the Mir Space Station on board Soyuz TM-21, worn by Gennady Michailovich Strekalov during five of his spacewalks (EVA) between May and June of 1995, and equipped with Velcro strap for fitting around his space-suit glove. This iconic model, one of the few existing examples actually worn in space, has full chronograph functions including minute and hour registers with constant seconds, tachymeter bezel for calculations of speed in units per hour, anti-magnetic movement cover, black dial and bezel insert, luminous markers, and is engineered for full water-resistance. The mechanism is Omega caliber 861, 17 jewels, serial number 48294756 repeated on both movement and lug-back, the back with full inscription reading “Flight qualified by NASA for all manned space missions / The first watch worn on the moon” concealed largely beneath the Velcro attachment swatch. Watch is accompanied by a left-handed glove from Strekalov’s Orlan EVA space suit worn during a May 1995 spacewalk, serial number 0540183, with outer thermal insulated nylon canvas, pebbled rubber palm and finger pads, rounded rubber fingertips, and two Velcro flaps above the knuckles. Accompanied by two handwritten letters from Strekalov, in Russian. One lists his missions and commendations, and states: “’Omega’ watch—special watch for work in space—was delivered on board Mir station with ‘Soyuz TM-21’ spacecraft. It was used 5 times at EVA in period May-June of 1995.” Second letter reads, in part: “I…confirm that glove of spacesuit ‘Orlan’ was used at extravehicular activity (EVA) in May, 1995…Fastened to this glove, at EVA, was ‘Omega’ watch which was also used in subsequent four EVA.”

The watch is in excellent running condition, all chronograph functions working perfectly, mechanism in mint condition, dial, hands and bezels in mint condition, case nearly mint with hardly any rubbing, wear or scuffing, clearly only used as an instrument and not subjected to regular wear. The strap has some glue remnant where it was in contact with the glove. The case-back and edge was marked with red polish to indicate its sealing and full closure position, to which it has been returned. A spectacular condition example with extensive historic documentation. An excellent collector example of the “Moon Watch” model, here being one of the few on Earth that has actually been in space, complete with the glove on which it was worn, carrying clear documentation.