Supremely rare portraits of the last of the Romanovs, Nicholas and Alexandra 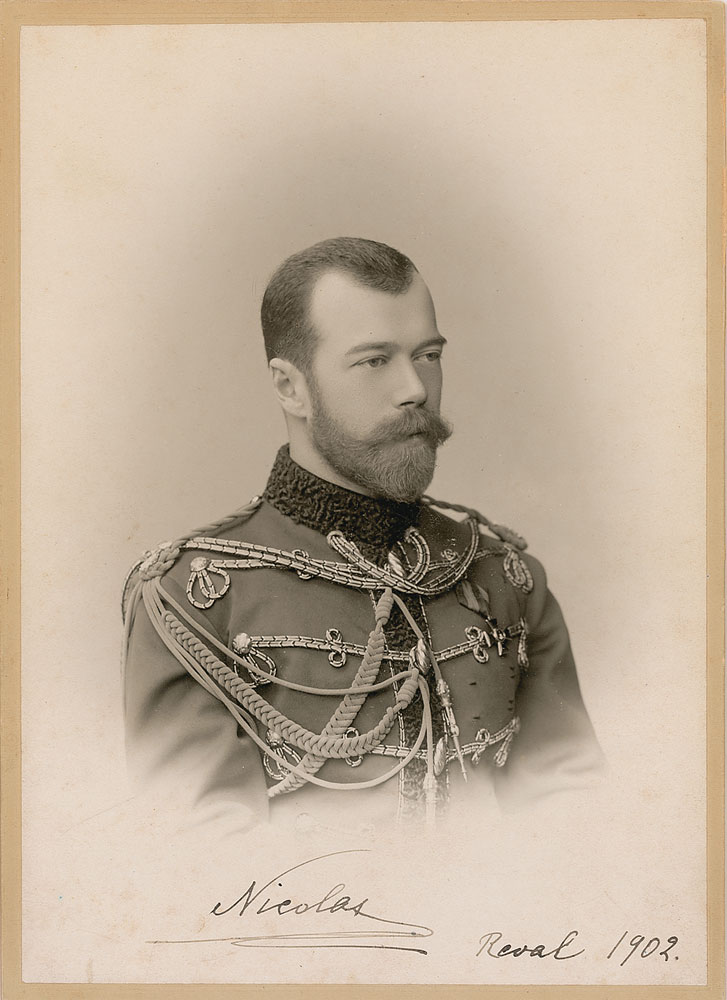 Supremely rare portraits of the last of the Romanovs, Nicholas and Alexandra

The last czar and empress of Russia, who reigned from 1894 until abdication in 1917. In the wake of the Russian Revolution, Nicholas, Empress Alexandra, and their children were imprisoned and finally executed on July 17, 1918. Two photos: one vintage matte-finish 5.5 x 7.5 portrait of Nicholas II affixed to its original 5.75 x 8 mount, by C. E. de Hahn & Co., signed at the bottom of the image in English in black ink, “Nicolas, Reval, 1902”; and one vintage matte-finish 4 x 6.25 profile portrait of Empress Alexandra affixed to its original 7.5 x 10.5 photographer’s mount, signed at the bottom of the image in black ink and dated 1905. Nicholas photo is in fine condition with trivial scattered surface marks and soiling, lightly trimmed edges to the mount, and trivial surface loss to reverse edges of the mount; Alexandra photo exhibits some silvering to dark areas of her hair, a central block of toning to the mount, and a few pencil notations and mounting remnants to the bottom of the mount, otherwise fine condition. Nicholas earned the nickname ‘Bloody Nicholas’ because of his propensity for ordering violence against opposition—one such incident, Bloody Sunday, took place in the same year Alexandra signed this photo. As peaceful protesters marched toward the palace to present a petition, they were gunned down by the Imperial Guard—historians estimate that approximately one thousand were killed. A superb, crystal-clear portrait of the last Russian czar, bearing his exceptionally rare English signature, and a scarce, highly desirable portrait of the empress. RR Auction COA.