Deputy Sheriff Oakley's widow identifies this Colt revolver, confiscated by her husband from the scene of the ambush 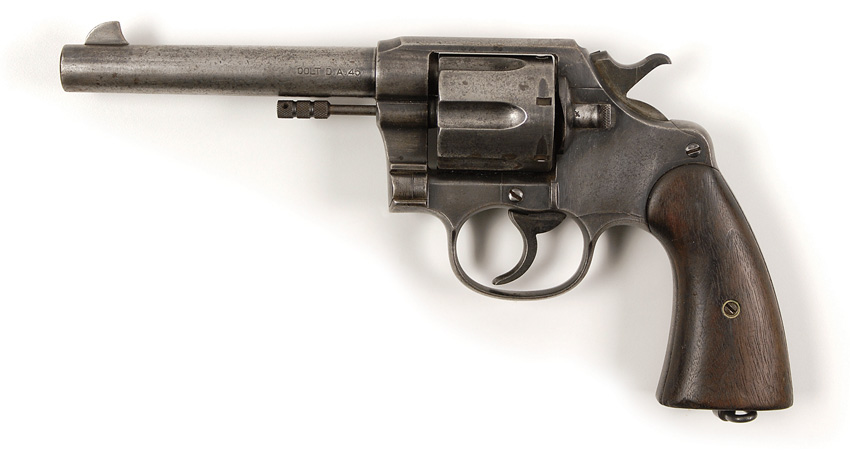 Deputy Sheriff Oakley's widow identifies this Colt revolver, confiscated by her husband from the scene of the ambush

A Colt New Service Model 1909 Double-Action revolver found in the bullet-riddled car driven by Bonnie and Clyde on the day they died. This revolver comes with a Colt Factory letter indicating it was shipped on August 12, 1911, to the US Ordnance Department in Manila, Philippine Islands. It is marked on the butt with “U.S./ Army/Model/1909/No. 148/261” and is a .45 Colt caliber gun with a 5.5″ barrel. The frame is marked with a monogramed circular government inspector’s cartouche plus the government inspector’s initials “R.A.C.” (Rinaldo A. Carr). The revolver is in very good mechanical condition with the metal having an overall gray patina with traces of blue and most of the factory markings are very good. The smooth walnut grips are in good condition and bear an “R.A.C.” inspection stamp on the butt.

Included with the gun is a picture of A. B. Rogers, Sr., a Deputy Sheriff in and for the Parish of Bienville, Louisiana, who was on duty in the court house at the time of Bonnie and Clyde’s deaths. He is displaying some of the ammunition and guns found in their car. Among the items are this revolver, three Colt 1911 pistols, two BARs, one cut down Remington Model 11 semi-auto shotgun, and numerous BAR and pistol magazines with extra ammunition. A letter from his daughter-in-law dated February 28, 2002, states that A. B. Rogers, Sr., was given this 1909 Colt at the time of the photograph. Also included is a notarized letter dated January 24, 1983, from Mrs. P. M. Oakley (the widow of Bienville Parish Deputy Sheriff Prentiss Oakley who fired the first shots in the ambush of Bonnie and Clyde). In this letter she states that her husband was on duty at the time of Bonnie and Clyde’s deaths and “that among the effects found on the body of Clyde Barrow was a: Colt 45 Revolver/U. S. Army Model 1909/ Gun Number 148 261. That said gun is now in the possession of A. B. Rogers, Jr., a resident of Baton Rouge, Louisiana.” Note that Mrs. Oakley’s 50-year-old recollection that this revolver was on Clyde’s body cannot be substantiated at this time, but it is readily visible among the weapons taken from the “death car.”