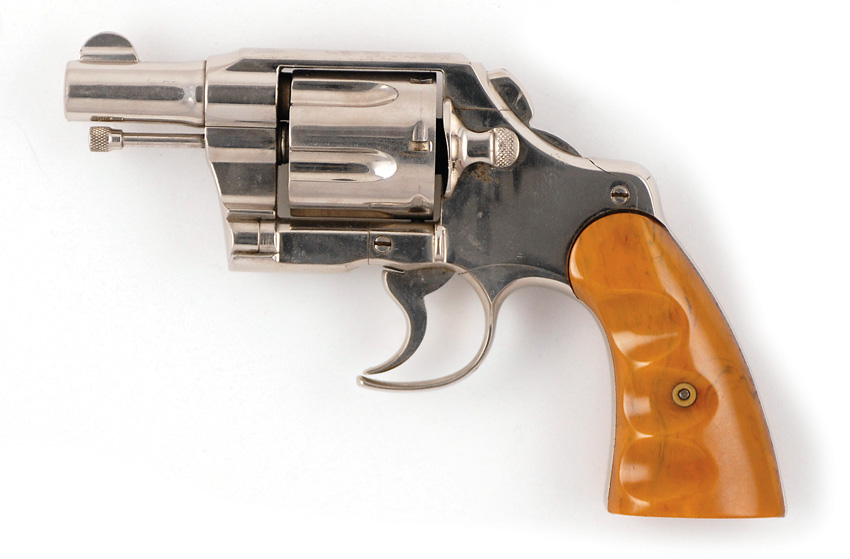 A Colt Army Special .38 Caliber revolver used by Clyde Barrow. This revolver serial number 505844, cal. .38 Special, has been modified in the style of the Colt factory “Fitzgerald Specials” with a 2 3/8″ barrel, bobbed hammer, and a cutaway triggerguard. It is in fine condition with all of a good looking nickel plated refinish remaining and finger grooved yellow phenolic grips. The bore has a couple of spots of light corrosion that should clean.

Three documents attesting to this revolver’s provenance accompany the gun.

2) A notarized affidavit to any fact, dated September 12, 1969, and signed by Rufus Pevehouse in which he sold this revolver to noted Texas gun collector Gaines de Graffenreid. He mentions the gun by serial number and states “serial number 505844, that was confiscated by me, May 6, 1930, from the car of Clyde Barrow and has been in my possession until said sale.”

3) A signed statement by Bill Gunn, Texas Ranger, on the letterhead of Fort Fisher Headquarters, Company F, Texas Rangers (the Texas Rangers Garrison Museum). He states that he was with Gaines de Graffenreid when he acquired this gun from Sheriff Pevehouse on August 26, 1969. He mentions the gun by serial number “that was once the property of Clyde Barrow,” and that “I have known about this revolver for several years and know it to be fully authentic…Sheriff Pevehouse has owned this revolver since May 6, 1930, and I think this to be a top outlaw item that once belonged to Clyde Barrow.” This Colt was sold at auction in 2001 by Christie's.

Note: Although Clyde Barrow was in custody from March 18, 1930, the date mentioned by Sheriff Pevehouse was simply the date that he found this revolver in an abandoned car he had previously impounded. On that date an F-4 tornado with winds of 160 miles per hour hit the little town of Frost, Texas, killing 27 people and demolishing all the public buildings except the jail. The only working vehicle for Sheriff Pevehouse to use was the one he had impounded, and this caused him to find this revolver he had previously overlooked. According to Bobby Flucker, Corsicana Historian, Clyde Barrow’s uncle Frank Barrow had called Sheriff Pevehouse several weeks earlier and said he had a stolen car in his yard and that he better come pick it up. When Pevehouse touched the car it was still very warm and he impounded it. Bobby Flucker also relates in a letter to RR Auction that at an exhibit of this gun in Texas there had been a letter from famed Texas Ranger ‘Lone Wolf’ Gonzales that stated Clyde Barrow had stolen this gun from him. Ranger Gonzales was known to use guns with the triggerguards removed and one other short barreled .38 so modified is well known.