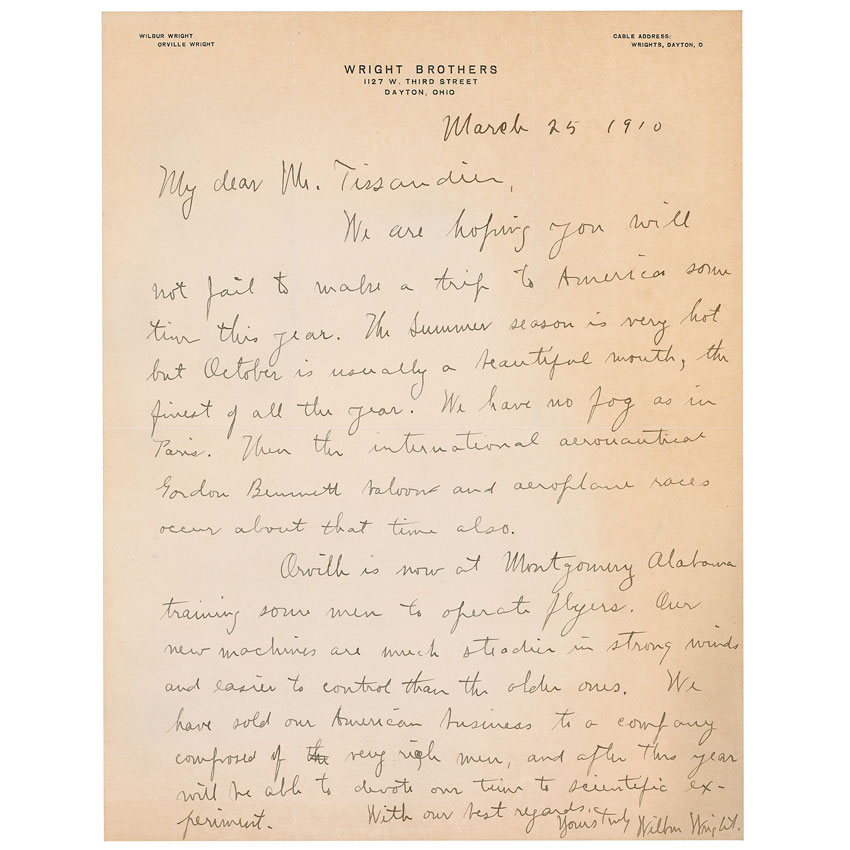 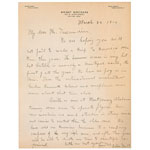 Next Lot
This lot has closed
Estimate: $0+

ALS, one page, 8.25 x 11, Wright Brothers, 1127 W. Third Street, Dayton, Ohio letterhead, March 25, 1910. Letter to M. Paul Tissandier. In full: “We are hoping you will not fail to make a trip to America some time this year. The Summer season is very hot but October is usually a beautiful month, the finest of all the year. We have no fog as in Paris. Then the international aeronautical Gordon Bennett baloon [sic] and aeroplane races occur about that time also.

Orville is now at Montgomery Alabama training some men to operate flyers. Our new machines are much steadier in strong winds and easier to control than the older ones. We have sold our American business to a company composed of very rich men, and after this year will be able to devote our time to scientific experiment.”

Wilbur writes to M. Paul Tissandier, his student pilot from when the Wright brothers were in the south of France in the spring of 1909. Flying for the entertainment of such notables as the kings of England and Spain, Wilbur made over sixty flights at the flying field at Pont-Long near Pau between February and March 1909. Just before Wilbur’s final flight at Pau, he allowed Tissandier to make his first solo flight, which lasted more than twenty minutes. Tissandier was later the first person after the Wright brothers to fly for more than an hour.

In this letter, Wilbur alludes to the flying school the Wrights established in Montgomery, Alabama, where Orville was training exhibition pilots. The brothers had entered into the exhibition business in January 1910 and needed to train pilots immediately. Since winter weather in Ohio was inhospitable to flying, they located the first flight school in the US on an Alabama farm. Wilbur’s “new machines” were the new Wright Model B Flyers, an alteration of the Wright Flyer in which the horizontal elevator was moved from the front to the back, and wheels were added. The Wright Model B became the first mass-produced airplane in history. The “very rich men” had purchased the brothers’ patents for $100,000 after the Wright Company was incorporated a few months prior to this letter. Wilbur also refers to the Gordon Bennett Cup, a balloon race in Paris founded in 1906 by James Gordon Bennett, an American newspaperman and millionaire.

Unfortunately, Wilbur would not be able to dedicate his time to “scientific experiment” as he became preoccupied with legal disputes involving the Wright patents, and passed away in 1912. An exceptionally scarce letter with excellent aviation references. Pre-certified John Reznikoff/PSA/DNA and RR Auction COA.