Rare uninscribed state presentation portrait from their 50 state tour, passed down from the governor of Tennessee 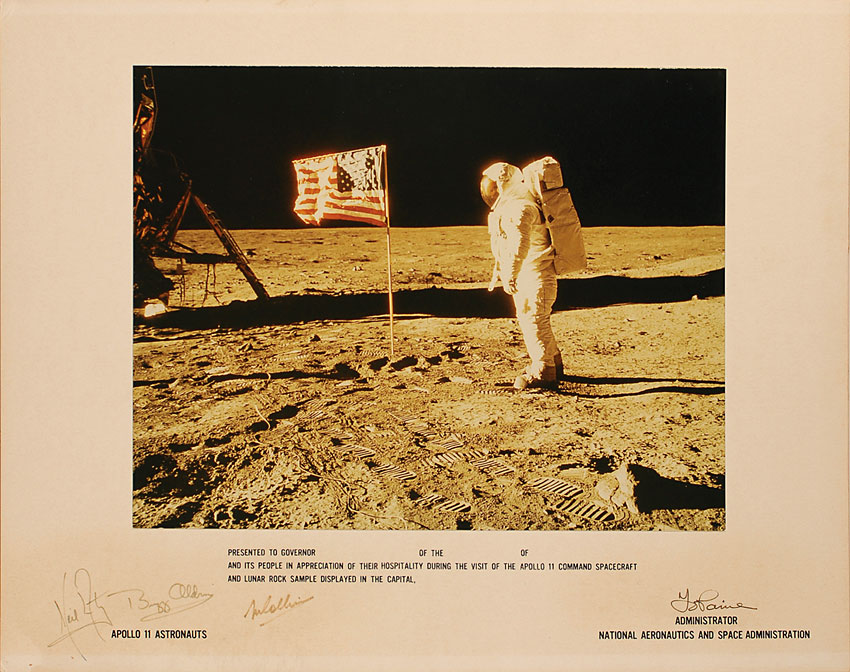 Rare uninscribed state presentation portrait from their 50 state tour, passed down from the governor of Tennessee

Color glossy 14 x 11 photo of Buzz Aldrin facing the flag on the lunar surface during the Apollo 11 mission, affixed to its original 20 x 16 mount. Mount bears an incomplete printed inscription which reads, “Presented to the Governor—of the—of—and its people in appreciation of their hospitality during the visit of the Apollo 11 Command Spacecraft and lunar rock sample displayed in the Capital,” and is signed on the mount in black felt tip by Neil Armstrong, Buzz Aldrin, and Michael Collins. Also signed on the mount by NASA Administrator Thomas Paine. Mount is affixed to a slightly larger off-white mount. Light uniform fading to all three signatures, all of which remain completely legible, and light toning to the mount from previous display, otherwise fine condition. Accompanied by a photocopied letter of provenance from the recipient of the photo which reads, “This Apollo 11…photo was given to me by Buford Ellington, Governor of Tennessee in 1970, via my father Ernie Keller, the Chief of Public Relations (Governor’s Office). This photo was given to Gov. Ellington during ‘The Apollo 11 Fifty-State Tour,’ following the first manned lunar expedition. He decided not to have the lettering completed, and instead gave it to my father to be given to me, Ted W. Keller. I was an Aerospace Engineering student at the University of Tennessee at the time and the Governor knew what it would mean to me to have this inspiration. It has been in my possession until February 2012. At the time, I was told that the print was a 1st generation hand-enlargement from the original negative returned from the moon.” In 1970, the Apollo 11 command module, a lunar sample, and the crew visited all 50 state capitals, ending in Washington, D. C., with the module winding up at the Smithsonian Institute. The crew and module stopped in Tennessee from September 18–21, 1970. A very scarce unissued presentation portrait with exceptional provenance. Pre-certified Steve Zarelli and RR Auction COA.