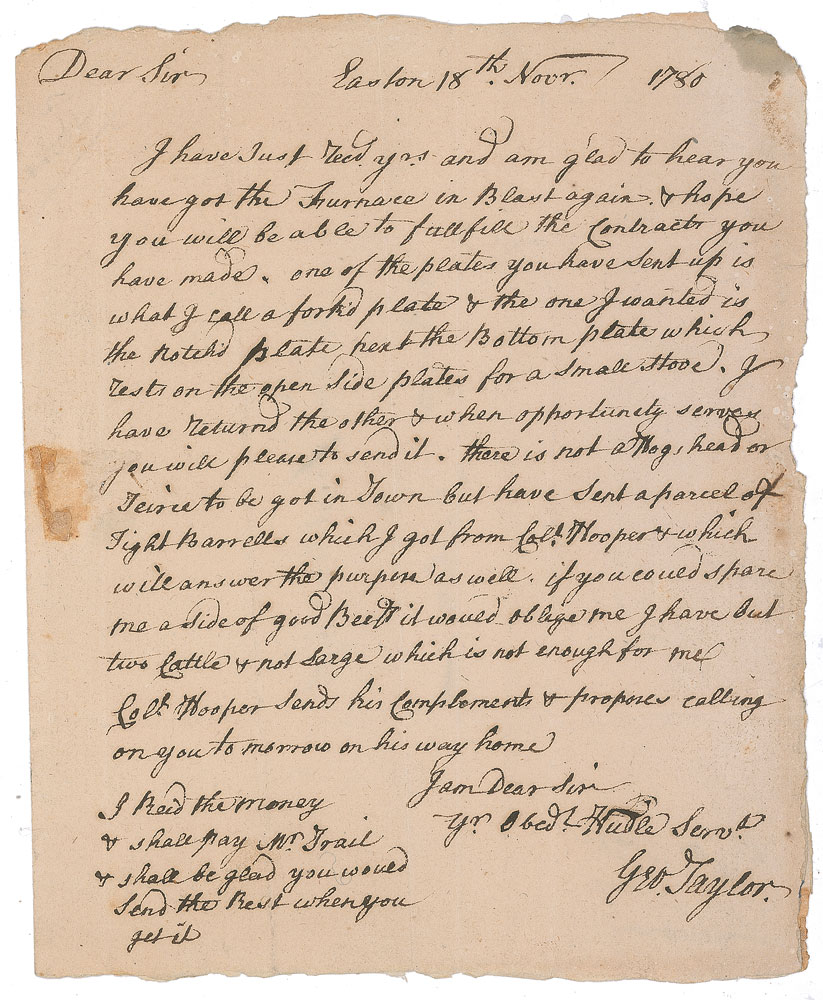 Signer of the Declaration of Independence from Pennsylvania (circa 1716–1781). As a late replacement for a delegate who refused to support independence, Taylor missed the vote but signed the formal Declaration on August 2, 1776. Exceedingly rare, war-dated ALS signed “Geo. Taylor,” one page, 6.5 x 8, November 18, 1780. Taylor writes to rector Richard Backhouse of St. David’s Episcopal Church, in full: “I have just rec’d yrs and am glad to hear you have got the Furnace in Blast again. I hope you will be able to fullfill the contract you have made. One of the plates you have sent up is what I call a fork’d plate & the one I wanted is the notched plate next the Bottom plate which rests on the open side plates for a small stove. I have returned the other & when opportunity serves you will please send it. There is not a Hogshead…to be got in Town but have sent a parcel of Right Barrells which I got from Col. Hooper & which will answer the purpose as well. If you could spare me a side of good Beef it would oblige me. I have but two Cattle & not large which is not enough for me. Col. Hooper sends his complement & proposes calling on you tomorrow on his way home,” adding the postscript, “I Rec’d the money & shall pay Mr. Trail & shall be glad [if] you would send the rest when you get it.” Address panel on reverse is penned in Taylor’s hand, with Blackhouse making a received note. Light intersecting folds, some light soiling, with two pronounced areas of soiling, one at the left edge and one at the top right corner, and rough edges, otherwise fine condition.

Taylor served one of the shortest terms of the delegates to the Continental Congress, but he was distinct among his colleagues. One of only eight foreign-born signers of the Declaration of Independence, having immigrated from Ireland in 1736, he was also the only to have worked his way out of indentured servitude, serving under ironmaster, Samuel Savage, Jr., at Warwick Furnance and Coventry Forge. After Savage died, Taylor married his widow and oversaw both ironworks, eventually forming a partnership with Durham Furnace and working with Pennsylvania’s Committee of Safety; they became the first iron companies to provide cannon shot to the Continental Army in 1775.

The only ironmaster to sign the Declaration, Taylor worked at his trade for his entire life, including the short period of failing health just before his death in 1781. As one of the earliest signers to pass, examples of Taylor's signature are extremely scarce—this is only the second known letter to come up for auction. This rarity is pictured on page 148 of Hamilton’s American Autographs Vol 1. A remarkable letter, of insurmountable desirability. Pre-certified John Reznikoff/PSA/DNA and RR Auction COA.