Fantastic concert, featuring Little Richard and the who’s who of early rock! 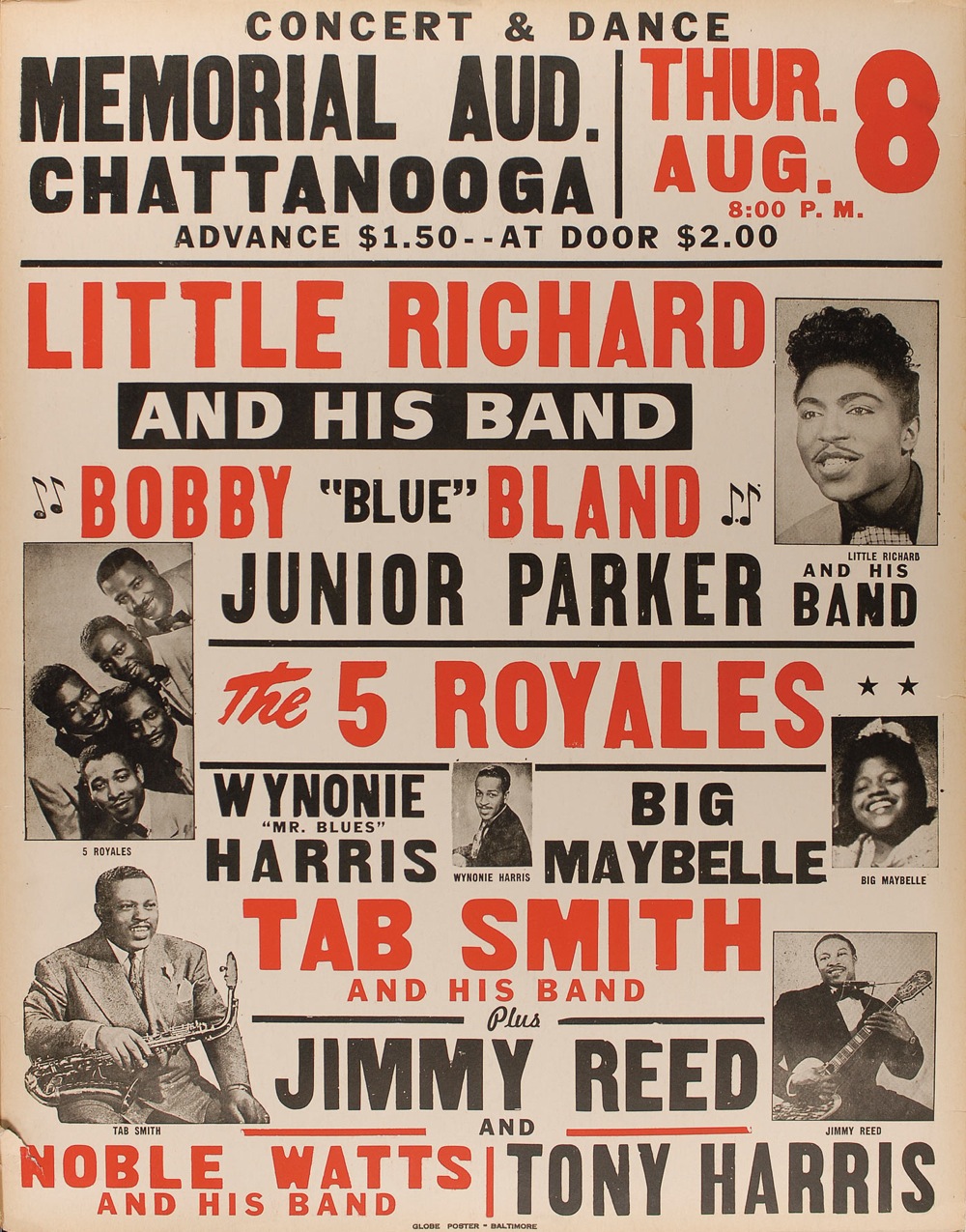 Fantastic concert, featuring Little Richard and the who’s who of early rock!

Original color 22 x 28.25 boxing-style poster for a Little Richard concert at the Memorial Auditorium in Chattanooga. The rock 'n' roll shouter, Little Richard, was certainly deserving of top-billing at this summer '57 gig in Chattanooga. After all, with appearances in three movies (Mister Rock and Roll, The Girl Can't Help It, and Don't Knock the Rock), along with seven hit singles during the year, including 'Lucille' and 'Jenny, Jenny,' Richard's star status was miles above his talented co-stars. As a matter of fact, in 1957, only Elvis Presley was receiving as much attention as the dynamic Little Richard! However, the supporting cast of Blues and R&B artists on hand that summer night in '57 were all pioneers of the genre that, by the mid-1950s, would come to be known as Rock 'n' Roll. While the soulful Bobby 'Blue' Bland was enjoying his first #1 hit in '57 with 'Farther Up the Road,' the harmonica and light baritone voice of his constant touring partner, Junior Parker, made for a delicious combination that influenced many a Rock 'n' Roller. Among them, Elvis Presley who took Parker's Sun Records smash 'Mystery Train' in '54 into mythic status when Elvis gave it his own treatment. The 5 Royales with guitarist/songwriter Lowman Pauling, the man largely responsible for combining Doo Wop, Jump Blues, and Gospel into the developing soul sound of the 1950s, influenced players from Steve Cropper to Eric Clapton. While Wynonie Harris established himself as a Rock 'n' Roller pioneer with 'Good Rockin' Tonight' in 1948, Blues shouter Big Maybelle did the same when she penned the classic 'Whole Lotta Shakin' Goin' On.' The combination of Jimmy Reed's raw vocal passion with his relaxed, steady-rolling guitar style not only made him a virtual hit machine during the 1950s, but impacted heavily on the big beat scene of the 1960s. All in all, the Chattanooga crowd couldn't ask for a more formidable line-up! Produced by Globe Posters of Baltimore. In very good condition, with toning, rubbing, and some tearing along the edges. RRAuction COA.