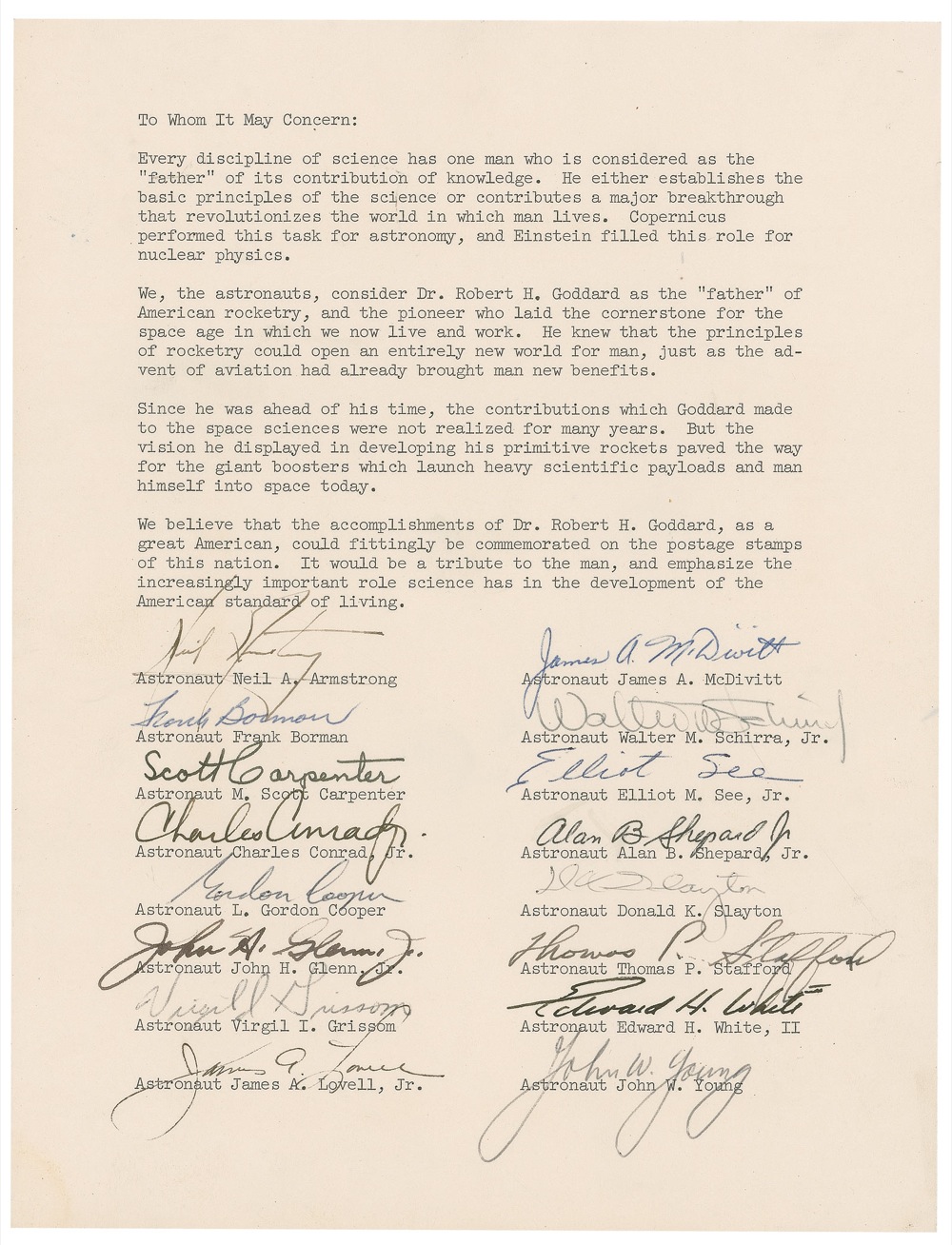 DS, one page, 8 x 10.5, no date [circa 1962]. A petition signed in ink by fifteen Group 1 and Group 2 astronauts requesting Robert Goddard be honored on a US postage stamp. Signed at the conclusion by Neil Armstrong, Frank Borman, Scott Carpenter, Charles Conrad, Jr., Gordon Cooper, John H. Glenn, Jr., Virgil I. Grissom, James A. Lovell, James A. McDivitt, Walter Mr. Schirra, Jr., Elliot See, Alan B. Shepard, Jr., Deke Slayton (signed “D. K. Slayton”), Edward H. White, and John W. Young. (A Thomas P. Stafford signature has been deemed autopen). In full: “Every discipline of science has one man who is considered as the ‘father’ of its contribution of knowledge. He either establishes the basic principles of the science or contributes a major breakthrough that revolutionizes the world in which man lives. Copernicus performed this task for astronomy, and Einstein filled this role for nuclear physics. We, the astronauts, consider Dr. Robert H. Goddard as the ‘father’ of American rocketry, and the pioneer who laid the cornerstone for the space age in which we now live and work. He knew that the principles of rocketry could open an entirely new world for man, just as the advent of aviation had already brought man new benefits. Since he was ahead of his time, the contributions which Goddard made to the space science were not realized for many years. But the vision he displayed in developing his primitive rockets paved the way for the giant boosters which launch heavy scientific payloads and man himself into space today. We believe that the accomplishments of Dr. Robert H. Goddard, as a great American, could fittingly be commemorated on the postage stamps of this nation. It would be a tribute to the man, and emphasize the increasingly important role science has in the development of the American standard of living.” Except for Slayton, each astronaut has signed his full name to the petition. Accompanied by a program honoring the Goddard stamp first day of issue on October 5, 1964. In fine condition, with light uniform toning, a couple areas of faint soiling, and the signatures of Grissom, Schirra, and Slayton a shade light.

The Mercury Seven and the New Nine—officially known as Astronaut Group 1 and Astronaut Group 2—were the men physically taking the risks...and accepting the accolades...for the adventures in space. Yet they were fully cognizant that it was a team effort that got them where they were and would carry them to the moon. They were also aware that they were building upon the successes (and sometimes failures) of earlier pioneers, such as Goddard. The American professor, physicist and inventor is credited with creating and building the world's first liquid-fueled rocket, launched on March 16, 1926. “Every discipline of science has one man who is considered as the ‘father’ of its contribution of knowledge...Robert H. Goddard as the ‘father’ of American rocketry, and the pioneer who laid the cornerstone for the space age,” the astronauts all agree here. As noted, the astronauts’ admiration and influence at the time helped convince the powers that be of the importance of Goddard’s work and his need to be recognized. A one-of-kind and historically significant document bearing the rarely seen full name signatures of America’s first space heroes! Pre-certified Scott Cornish and RR Auction COA.