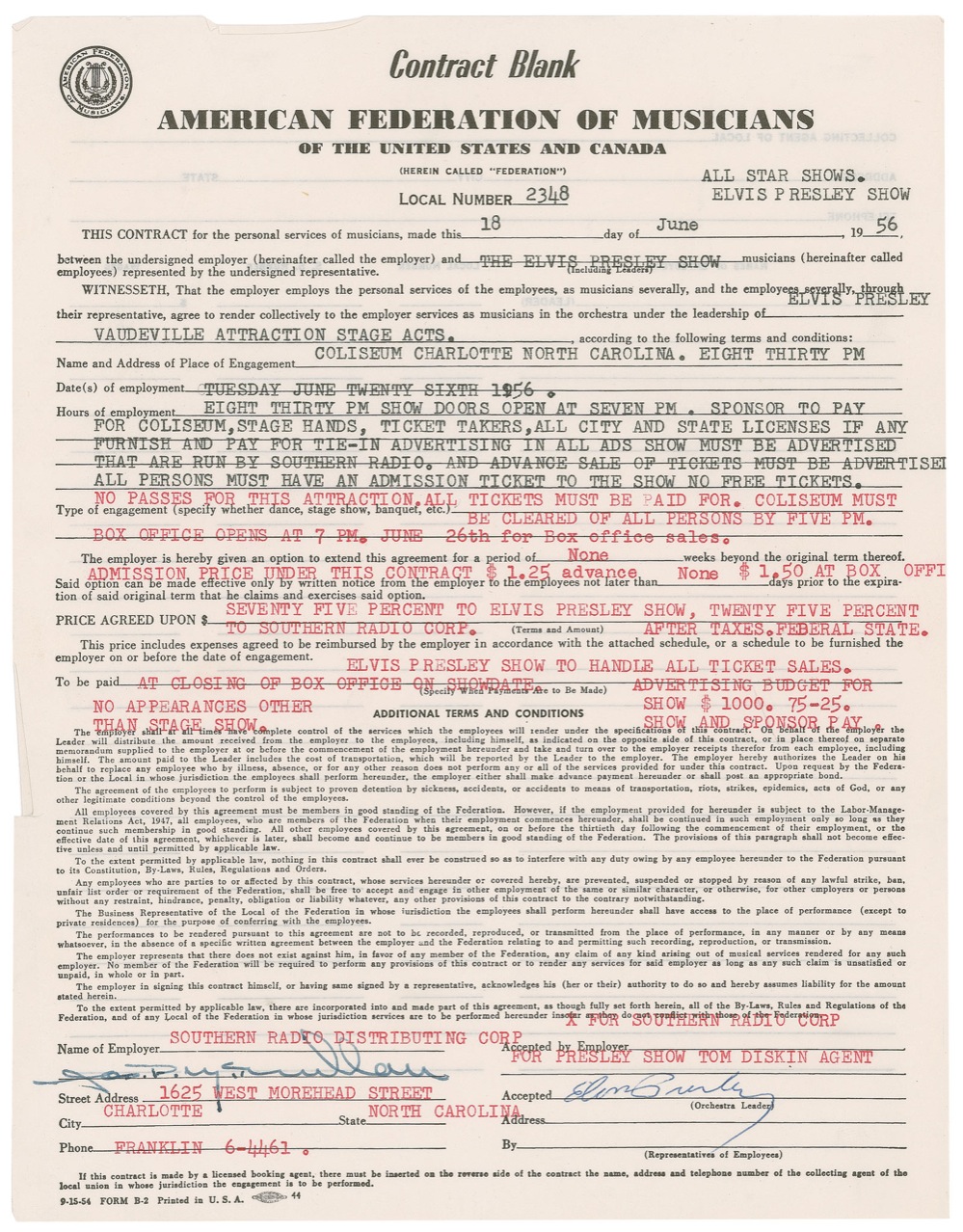 Very early and rare DS, one page both sides, 8.5 x 11, June 18, 1956. Agreement for Elvis to perform at the Coliseum in Charlotte, North Carolina on June 26, 1956. Document is very detailed concerning fees, ticketing, employment, and payments. Document reads, in part: “Eight thirty PM Show doors open at Seven PM. Sponsor to pay for Coliseum, stage hands, ticket takers, all city and state licenses if any. Furnish and pay for tie-in advertising in all ads and show must be advertised that are run by Southern Radio. And advance sale of tickets must be advertised. All persons must have an admission ticket to the show. No free tickets. No passes for this attraction. All tickets must be paid for. Coliseum must be cleared of all persons by five p.m. Admission price under this contract $1.25 advance. $1.50 at box office.” Under price agreed upon, contract states: “Seventy five percent to Elvis Presley Show, Twenty-five percent to Southern Radio Corp. After taxes. Federal. State.” Document also states “No appearances other than stage show,” and provides a $1000 advertising budget. Signed at the conclusion in blue ballpoint by Presley. In fine condition, with two horizontal folds, some scattered light creases, and some creasing and a couple small tears to edges. Accompanied by an unused ticket to the show, and a North Carolina Department of Revenue report of gross tax receipts from the show stating the gross was $8035.36, with $241.06 taxes due. Authentic signed Elvis Presley concert appearance contracts are exceedingly rare and highly desirable, very few authentic examples are known.

Only a week after his breakout single, ‘Heartbreak Hotel,’ finally surrendered the #1 position on the Billboard Pop Singles chart after an eight week stay, The Elvis Presley Show made its way to Charlotte, North Carolina, on June 26, 1956. His debut in front of a Charlotte audience was a mere four months earlier in February when Elvis was part of a Grand Old Opry package tour where the majority of his fan base was still country & western based. The four sold-out appearances in front of 6000 fans at the Carolina Theatre in one-day were primarily due to the inclusion of Elvis on the bill. His national television debut on The Dorsey Brothers Stage Show two weeks prior in tandem with the ascent of his final Sun Records single, ‘I Forgot To Remember To Forget You,’ to #1 on the Billboard Country & Western Singles chart the same week of that first Charlotte appearance sparked rabid interest among teenagers throughout the region. After observing the thousand fans who couldn’t gain admission to the last of the four shows, The Charlotte Observer exclaimed: “Those who got in were mostly teen-aged girls, with gum in their mouths and bobby socks on their feet. The Brando-like singer took a rubber-leg stance and sent ’em with his new musical style. Girls leapt up onto their seats and waved their arms. One girl cut a flip right in front of the stage.”

Elvis ripped through his set at a fever pitch, causing mostly teen-aged girls to leave their seats and rush the stage midway through his seven-song set and causing a five-minute delay during ‘Baby Let’s Play House.’ Leading off with 'Heartbreak Hotel,' followed by 'Long Tall Sally,' 'I Was the One,' 'Baby Let's Play House', 'Blue Suede Shoes,' 'I Want You, I Need You, I Love You,' and 'Hound Dog,' the rabid response was the same at every venue in which Elvis and his Blue Moon Boys (Scotty Moore, Bill Black, and D.J. Fontana) appeared. Pre-certified Roger Epperson/REAL and RR Auction COA.