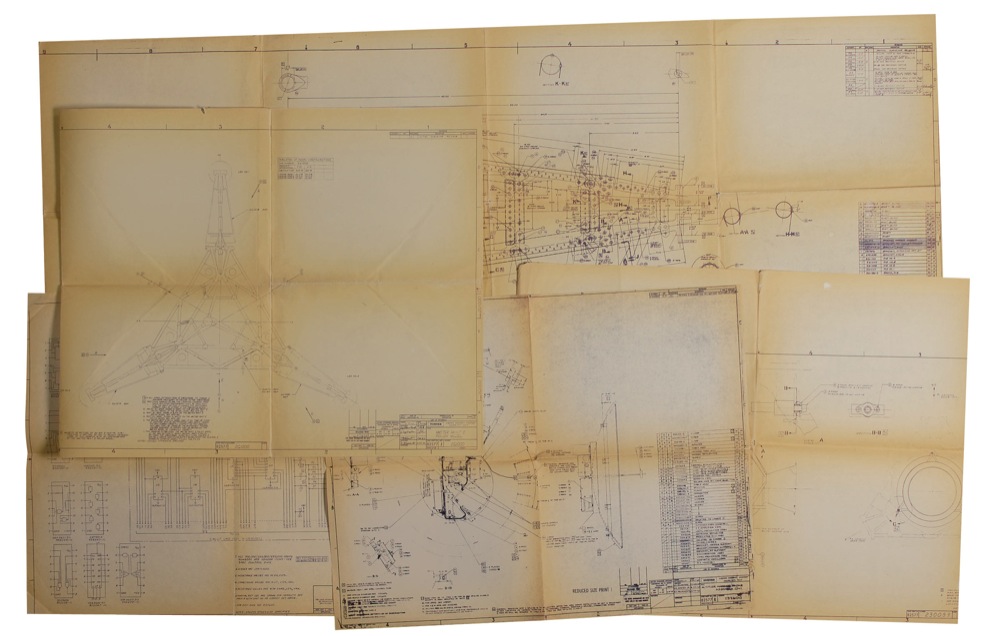 Five original printed Hughes Aircraft Co. blueprints for Surveyor 1, the first US spacecraft to land on the moon. The printed scale blueprints are of various systems and configurations and are as follows: a large 68 x 18 blueprint entitled “Leg, Lunar Landing Gear, No. 3,” showing a highly detailed schematic of the landing leg; a 35 x 18 blueprint entitled “Master Paint and Polish Model,” showing several views of the landing legs; a 34.5 x 18 blueprint entitled “Main Retro Rocket Engine Installation”; a 22 x 17 schematic entitled “Decoder, Radar Master Oscillator, Schematic Diagram,” with a revision document staples to the reverse; and a 22 x 17 schematic entitled “Altitude Marking Radar Assembly.” In fine condition, with storage folds to all blueprints, as well as some partial separations to a few of the folds, and scattered light toning, handling wear, and a few edge tears. Accompanied by an original spiral-bound Hughes Aircraft Co. Surveyor Launch Operations Plan, a 1968 issue of Vectors, the Hughes Aircraft informational publication commemorating Surveyor, a printed facts sheet, and a four-page news release issued by Hughes announcing the landing of Surveyor.

Surveyor 1 was NASA’s first lunar soft-lander in the unmanned Surveyor program. Designed to gather data about the lunar surface needed for the manned Apollo moon landings, construction started in the fall of 1964 at Hughes’ facility in El Sugundo, California. Each component had to operate flawlessly, with the “Lunar Landing Gear,” the “Radar Master Oscillator,” and “Altitude Marking Radar Assembly” all key to a successful moon landing. Despite the detailed nature of these blueprints, preliminary tests revealed a variety of design problems and resulted in subsequent revisions. Surveyor 1 successfully touched down on the lunar surface on June 2, 1966. These respective blueprints—most notably for the lunar landing gear, the radar master, and altitude marking radar assembly—all pertain to the landing onto the surface of the moon and represent some of the first movement in what would culminate in Apollo 11 and Neil Armstrong’s ‘one small step.’ RRAuction COA.