Audrey Hepburn offers George Cukor her opinionated critique of Oliver while pushing for a meatier film version: 'In all I felt much much more can be made of the piece..the girl I find could be more human...the 'pickpocket with heart of gold'" 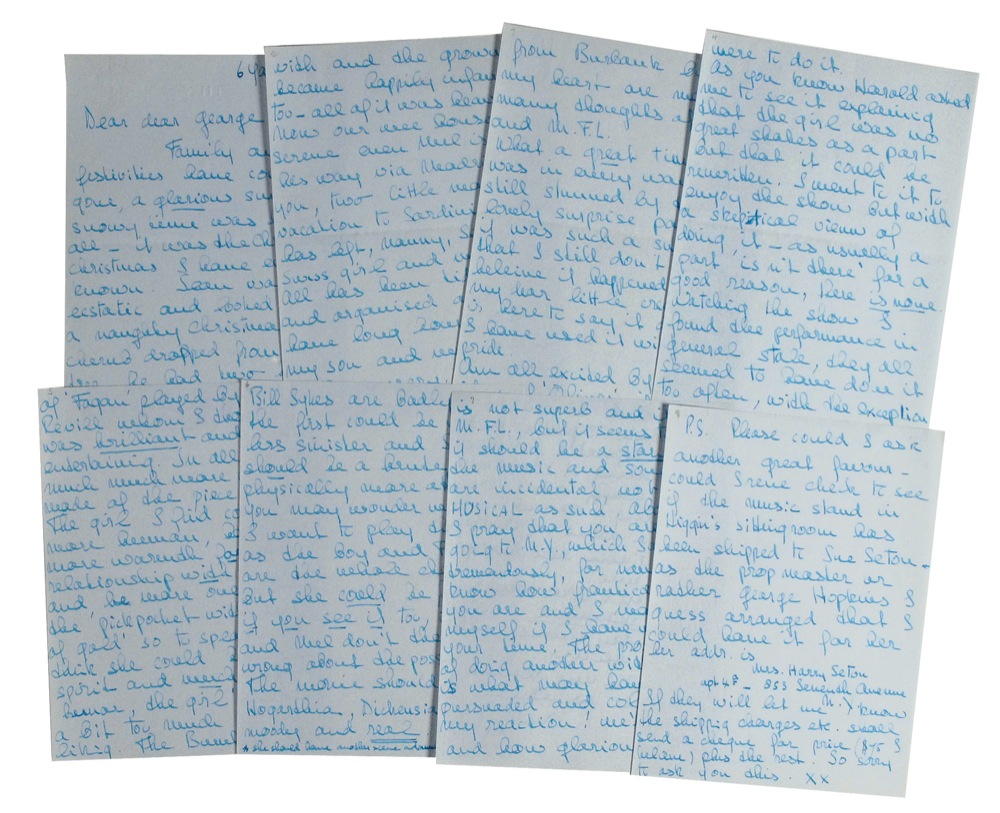 Audrey Hepburn offers George Cukor her opinionated critique of Oliver while pushing for a meatier film version: 'In all I felt much much more can be made of the piece..the girl I find could be more human...the 'pickpocket with heart of gold'"

ALS signed “Audrey xx,” eight pages on seven light blue sheets (on the last page she uses both sides), plus an additional postscript page, 6 x 7.75, personal letterhead, January 6, 1964. Hepburn writes legendary film director George Cukor to express her interest in a role in Oliver and offer several ideas on how to improve it. In part: “Family and festivities have come and gone, a glorious sunny snowy time was had by all—it was the Christmasiest Christmas I have ever known…Am all excited by the idea of ‘Oliver’ if you were to do it. As you know Harold asked me to see it explaining that the girl was no great shakes as a part but that it could be rewritten. I went to it and enjoy the show but with a skeptical view of doing it—as usually a part ‘is not there’ for a good reason, there is none. Watching the show I found the performance in general stale, they all seemed to have done it too often, with the exception of ‘Fagan’ played by Clive Revill whom I thought was brilliant and highly entertaining.

In all I felt much much more can be made of the piece. The girl I find could be more human, have far more warmth for and relationship with the Boys—and be more one of them, the ‘pickpocket with heart of gold’ so to speak. I think she could have more spirit and much more humor, the girl ‘yammered’ a bit too much for my liking. The Baubles and Bill Sykes are badly cast—the first could be jollier less sinister and Sykes should be a brute but physically more attractive. You may wonder why I want to play the girl as the boy and Fagan are the whole cheese. But she could be fascinating if you see it too, if you and Mel don’t then I am wrong about the possibilities. The movie should be Hogarthian, Dickensian, sepia, moody and real. The score is not superb…it should be a story, where the music and songs are incidental, not a MUSICAL as such…I know how frantically busy you are and I may kill myself if I have wasted your time. The prospect of doing another with you is what may have persuaded and coloured my reaction! We’ll see!” Hepburn has underlined several words for emphasis. In fine condition, with a light horizontal crease and some wrinkling.

Cukor and Hepburn had just finished My Fair Lady together when she sent this letter concerning re-teaming with the director. The perfect vehicle, she believed, was Oliver!, at the time in the midst of a 774-performance run on Broadway. However, ‘Eliza Doolitle’ still stung from the realizations that the majority of her songs in My Fair Lady had been dubbed by Marni Nixon, despite a lengthy vocal preparation for the role. Shouldering what she saw as the blame for not being able to vocally play the role, Hepburn suggested that a role in Oliver! be re-written for her, making the female part “more human” with “far more warmth for and relationship with the Boys—and be more one of them, the ‘pickpocket with heart of gold.’” After seeing the Broadway play, she believed that the film version “should be a story, where the music and songs are incidental,” as opposed to being a musical. The motion picture version of Oliver! was released in 1968...as directed by Carol Reed and without Hepburn’s participation. A lengthy and insightful look into the beloved actress’ commitment to her craft. Pre-certified PSA/DNA and RRAuction COA.