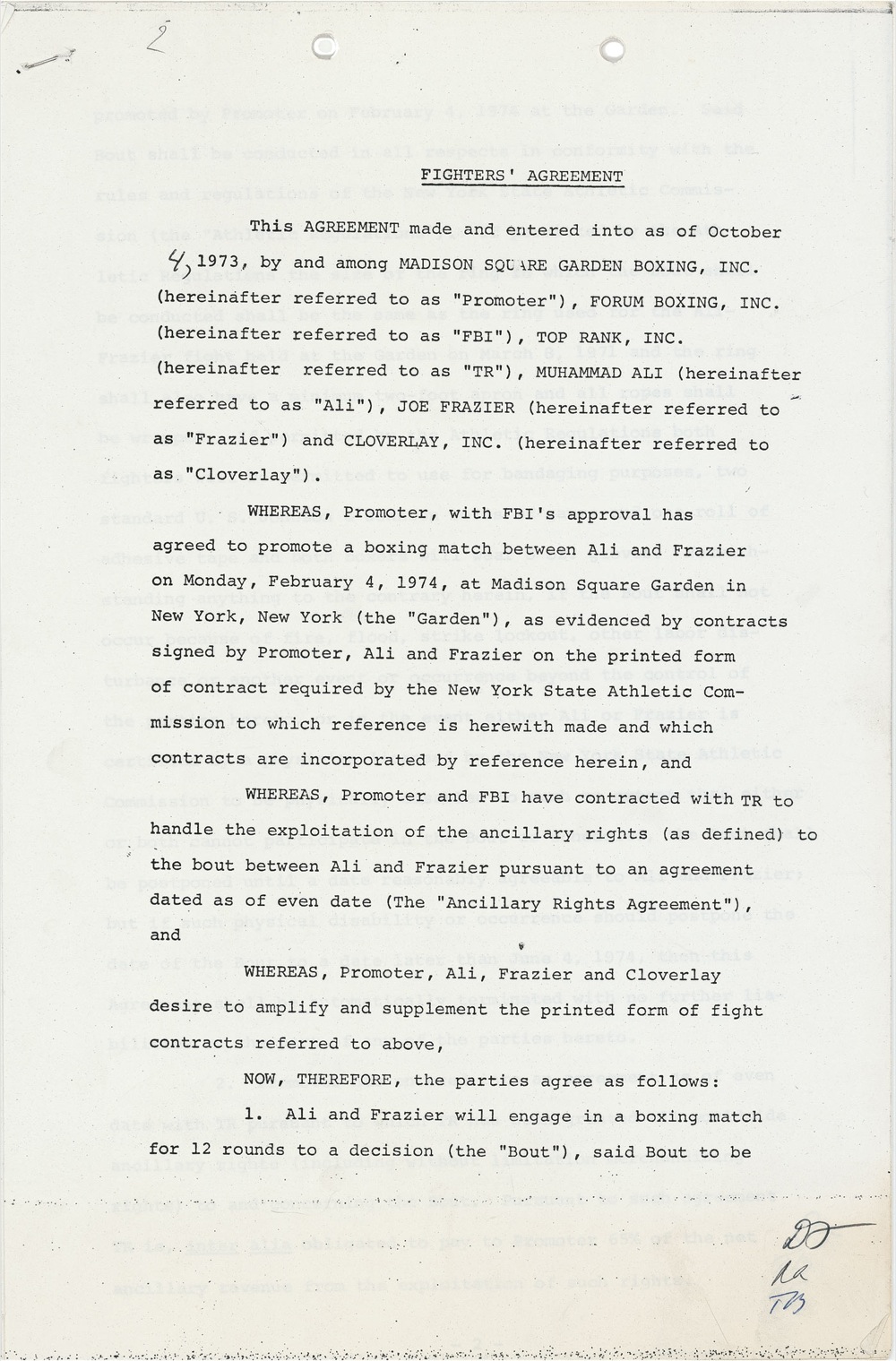 Historic DS, eleven pages, 8.5 x 13, October 4, 1973. The fighter’s agreement for Ali-Frazier II on Monday, February 4, 1974 at Madison Square Garden. The document reads, in part: “Ali and Frazier will engage in a boxing match for 12 rounds to a decision…said bout to be promoted by Promoter on February 4, 1974 at the Garden…If permitted by Athletic Regulations the size of the ring in which the Bout shall be conducted shall be the same as the ring used for Ali-Frazier fight held at the Garden on March 8, 1971 and the ring shall also have a minimum two-foot apron and all ropes shall be wrapped. If permitted by the Athletic Regulations both fighters will be permitted to use for bandaging purposes, two standard U. S. Johnson & Johnson rolls of gauze and one roll of adhesive tape and both boxers will wear 8 oz. gloves.”

Ali and Frazier each agree not to engage in any boxing contests whatever between the date hereof and February 4, 1974, except that Ali may engage in a bout with Rudy Lubbers…and that Frazier may engage in one non-championship bout…against an opponent approved by promoter…Promoter agrees that Urtain is an acceptable opponent. The parties agree that if Ali loses his fight with Lubbers andFrazier loses his fight…then Promoter…may terminate this agreement without further liability.

If on or before October 30, 1973, a determination is not received from the New York State tax authorities regarding the tax consequences to Ali, Cloverlay, and Frazier…FBI [Forum Boxing Inc.] may elect…to transfer the site of the bout to a location outside of New York…Ali and Cloverlay agree that The Spectrum in Philadelphia or The Astrodome in Houston, Texas, are approved alternative sites.” Signed on the last page in black ballpoint “Muhammad Ali,” and in blue ballpoint “Joe Frazier.” Document is also signed by several other officials. In fine condition, with two punch holes to top of each page, three sets of initials to bottom of each page, staple to top left, and some light toning to lower right corners of opening pages.

Nestled between two famed Ali-Frazier bouts—The Fight of the Century and the Thrilla in Manilla—Ali-Frazier II is perhaps the least remembered of the pugilists’ rivalry, yet events leading up to it cemented what was to become boxing’s greatest rivalry. For Ali, the contest was key. After verbally taunting Frazier in interviews following their first meeting, the Greatest not only wanted to avenge himself following a crushing defeat at the hands of Smokin’ Joe some three years earlier, but also needed to use the fight as a stepping stone to challenge George Foreman, the newest Heavyweight Champion of the World. Ali was successful, unleashing a flurry of punishing blows to which Frazier was unable to effectively respond. Next up was the Rumble in the Jungle versus Foreman, but this contract must be remembered as the very paperwork that laid the foundation for perhaps the greatest rivalry in boxing history—Ali-Frazier. Pre-certified Steve Grad/PSA/DNA and RRAuction COA.